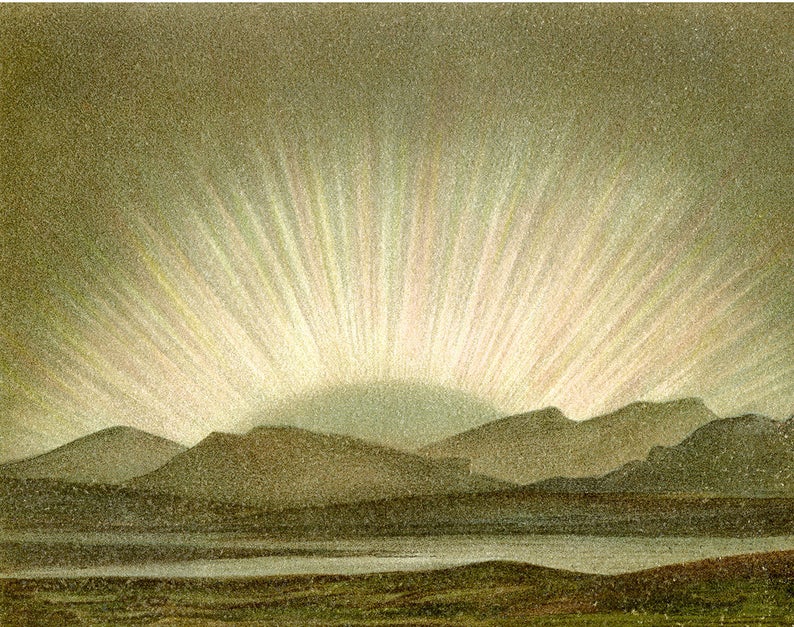 North of us a shaft of light shot half way to the zenith. It came from behind the five peaks. The beam drove up through a column of blue haze whose edges were marked as sharply as the rain that streams from the edges of a thunder cloud. It was like the flash of a searchlight through an azure mist. It cast no shadows.

As it struck upward the summits were outlined hard and black and I saw that the whole mountain was shaped like a hand. As the light silhouetted it, the gigantic fingers stretched, the hand seemed to thrust itself forward. It was exactly as though it moved to push something back. The shining beam held steady for a moment; then broke into myriads of little luminous globes that swung to and fro and dropped gently. They seemed to be searching.

The forest had become very still. Every wood noise held its breath. I felt the dogs pressing against my legs. They too were silent; but every muscle in their bodies trembled, their hair was stiff along their backs and their eyes, fixed on the falling lights, were filmed with the terror glaze.

I looked at Anderson. He was staring at the North where once more the beam had pulsed upward.

“It can’t be the aurora.” I spoke without moving my lips. My mouth was as dry as though Lao T’zai had poured his fear dust down my throat.

“If it is, I never saw one like it,” he answered in the same tone. “Besides, who ever heard of an aurora at this time of the year?”

He voiced the thought that was in my own mind.

“It makes me think something is being hunted up there,” he said, “an unholy sort of hunt — it’s well for us to be out of range.”

“The mountain seems to move each time the shaft shoots up,” I said. “What’s it keeping back, Starr? It makes me think of the frozen hand of cloud that Shan Nadour set before the Gate of Ghouls to keep them in the lairs that Eblis cut for them.”

He raised a hand — listening.

From the North and high overhead there came a whispering. It was not the rustling of the aurora, that rushing, crackling sound like the ghosts of winds that blew at Creation racing through the skeleton leaves of ancient trees that sheltered Lilith. It was a whispering that held in it a demand. It was eager. It called us to come up where the beam was flashing. It drew. There was in it a note of inexorable insistence. It touched my heart with a thousand tiny fear-tipped fingers and it filled me with a vast longing to race on and merge myself in the light. It must have been so that Ulysses felt when he strained at the mast and strove to obey the crystal sweet singing of the Sirens.

“What the hell’s the matter with those dogs?” cried Anderson savagely. “Look at them!”

The malemutes, whining, were racing away toward the light. We saw them disappear among the trees. There came back to us a mournful howling. Then that too died away and left nothing but the insistent murmuring overhead.

The glade we had camped in looked straight to the North. We had reached I suppose three hundred miles above the first great bend of the Koskokwim toward the Yukon. Certainly we were in an untrodden part of the wilderness. We had pushed through from Dawson at the breaking of the Spring, on a fair lead to the lost five peaks between which, so the Athabasean medicine man had told us, the gold streams out like putty from a clenched fist. Not an Indian were we able to get to go with us. The land of the Hand Mountain was accursed, they said. We had sighted the peaks the night before, their tops faintly outlined against a pulsing glow. And now we saw the light that had led us to them.

Anderson stiffened. Through the whispering had broken a curious pad-pad and a rustling. It sounded as though a small bear were moving towards us. I threw a pile of wood on the fire and, as it blazed up, saw something break through the bushes. It walked on all fours, but it did not walk like a bear. All at once it flashed upon me — it was like a baby crawling upstairs. The forepaws lifted themselves in grotesquely infantile fashion. It was grotesque but it was — terrible. It grew closer. We reached for our guns — and dropped them. Suddenly we knew that this crawling thing was a man!