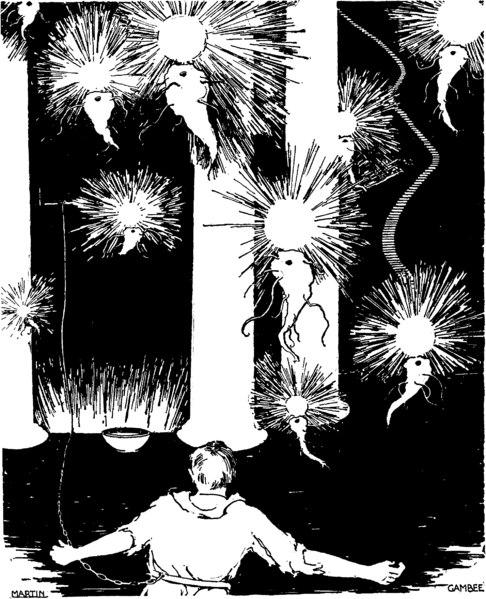 Illustration for “The People of the Pit” from Amazing Stories (1927)

“Nothing under them!” breathed Anderson.

“No,” he went on, “that was the terrible part of it — there was nothing under them. Yet certainly the lights were living things. They had consciousness, volition, thought — what else I did not know. They were nearly two feet across — the largest. Their center was a bright nucleus — red, blue, green. This nucleus faded off, gradually, into a misty glow that did not end abruptly. It too seemed to fade off into nothingness — but a nothingness that had under it a somethingness. I strained my eyes trying to grasp this body into which the lights merged and which one could only feel was there, but could not see.

“And all at once I grew rigid. Something cold, and thin like a whip, had touched my face. I turned my head. Close behind were three of the lights. They were a pale blue. They looked at me — if you can imagine lights that are eyes. Another whiplash gripped my shoulder. Under the closest light came a shrill whispering. I shrieked. Abruptly the murmuring in the street ceased. I dragged my eyes from the pale blue globe that held them and looked out — the lights in the streets were rising by myriads to the level of where I stood! There they stopped and peered at me. They crowded and jostled as though they were a crowd of curious people — on Broadway. I felt a score of the lashes touch me —

“When I came to myself I was again in the great Place of the Stairway, lying at the foot of the altar. All was silent. There were no lights — only the mottled red glow. I jumped to my feet and ran toward the steps. Something jerked me back to my knees. And then I saw that around my waist had been fastened a yellow ring of metal. From it hung a chain and this chain passed up over the lip of the high ledge. I was chained to the altar!

“I reached into my pockets for my knife to cut through the ring. It was not there! I had been stripped of everything except one of the canteens that I had hung around my neck and which I suppose They had thought was — part of me. I tried to break the ring. It seemed alive. It writhed in my hands and it drew itself closer around me! I pulled at the chain. It was immovable. There came to me the consciousness of the unseen Thing above the altar. I groveled at the foot of the slab and wept. Think — alone in that place of strange light with the brooding ancient Horror above me — a monstrous Thing, a Thing unthinkable — an unseen Thing that poured forth horror —

“After a while I gripped myself. Then I saw beside one of the pillars a yellow bowl filled with a thick white liquid. I drank it. If it killed me I did not care. But its taste was pleasant and as I drank my strength came back to me with a rush. Clearly I was not to be starved. The lights, whatever they were, had a conception of human needs.

“And now the reddish mottled gleam began to deepen. Outside arose the humming and through the circle that was the entrance came streaming the globes, They ranged themselves in ranks until they filled the Temple. Their whispering grew into a chant, a cadenced whispering chant that rose and fell, rose and fell, while to its rhythm the globes lifted and sank, lifted and sank.

“All that night the lights came and went — and all that night the chant sounded as they rose and fell. At the last I felt myself only an atom of consciousness in a sea of cadenced whispering; an atom that rose and fell with the bowing globes. I tell you that even my heart pulsed in unison with them! The red glow faded, the lights streamed out; the whispering died. I was again alone and I knew that once again day had broken in my own world.