Cruel, cavalier elites are having a moment. And not just in reality. But, since these are times of carefully rationed expectations, the familiar criticism of the now-ubiquitous superhero genre — that it is nothing but simplistic revenge fantasy — is receding in the shadow of more and more such stories that are dramatizations of powerlessness. 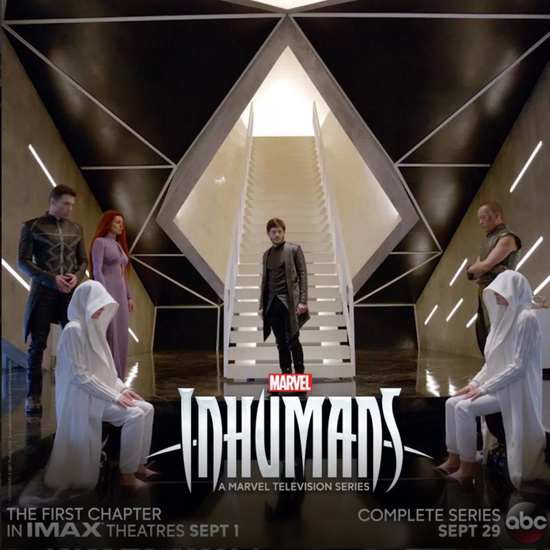 Of particular note is the redistribution of resources between two of Marvel Studios’ most recent TV shows. The Inhumans, which ran for eight weeks to unanimous disinterest, looked like it was leaked to primetime before the CGI had been added, and took place in the kind of settings that a B-director of the 1950s would sneak onto without paying. (The flat scripts and demoralized performances were roughly worth the price as well.) The budget seems to have been diverted to Agents of S.H.I.E.L.D., which resumed its run with a two-hour, and in every respect movie-quality, season opener shortly after Inhumans concluded (though ironically, it was the latter show whose first two hours had been given a gimmicky and commercially DOA pre-release in IMAX theatres).

In its previous season, S.H.I.E.L.D., notwithstanding its roots in Cold War/James Bond-era fetishism of authority, became the most revolutionary show on network TV, casting its characters into a nightmare VR world where their Nazi-derived nemesis HYDRA had long-since assumed control of the U.S., and would at times appropriate direct quotes from Trump and his enablers with what seemed clairvoyant speed. This was fake reality of the most formidable kind, unsparing in the personality distortions that the situation could wreak on beloved characters and the impossible choices it could force upon them. 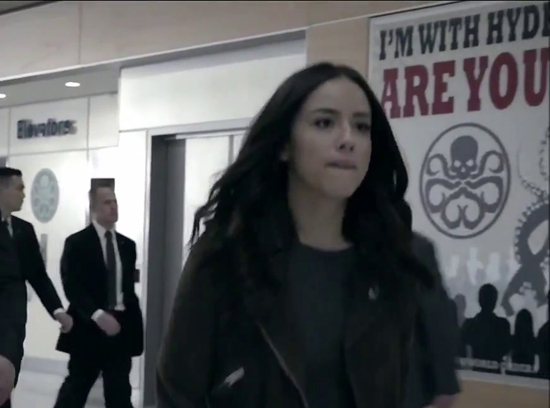 This arc was the last of three that season, not coincidentally bookended by (and eventually connecting with) one about the Ghost Rider — a working-class Latino from LA who’s had to take out an onerous debt to the devil and whose hellish chariot itself is a tricked-out used car. The HYDRA arc accentuated the thuggery and open racist sadism of the Trump model, though the way in which a pivotal antagonist meets her fate at this vengeful cosmic car-mechanic’s hands pointed to what plane of the Trump edifice might be defaced next.

In the show’s new season, the template is not Hitler but Nero, looping back to the oligarchical/employer-from-hell aspect of the current American quandary, as seen also in the class antagonisms and macho rank-pulling pecking-orders of The Punisher and the callous gladiatorial trials and feckless autocrat in Thor: Ragnarok. Inward trauma (the virtual hell) has spread out to external ordeal, as the Agents find themselves in a future subjugated by the interstellar imperialists, the Kree. 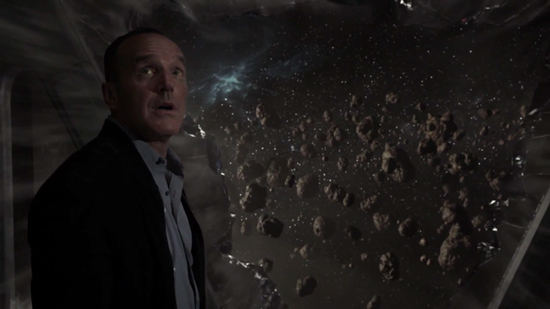 That name will be familiar to Marvel-movie and –TV junkies, as the alien race that meddled with human genes in prehistoric antiquity and created the offshoot species known as Inhumans (a longtime sci-fi hidden-society presence in the comics, but used in Marvel Studios shows as a stand-in for the X-Men, which FOX still holds the license to). The cinematic Inhumans first surfaced on S.H.I.E.L.D., as ordinary people with a dormant gene triggered by an accidental release of the substance the Kree originally used, who then gain bizarre and often-unwanted powers. The show had, over several seasons, built up a consistent and credible parallel existence for these everyday casualties of precipitous evolution, and then for reasons yet to be deciphered Marvel juggled its release schedule and rush-ordered a miniseries about the elder Inhumans’ secret kingdom on the moon, and its aristocratic residents.

Perfunctory attention was given to the stratification of this kingdom, Attilan — a royal bloodline of figures who get exposed to the Kree element (“Terrigen”) and gain fearsome new attributes, and a serf class of those whose mutations don’t take — and the humility the royal family must learn when cast down amongst the common beings of Earth by a rival to the throne. But the caste animosities of the current century were a secondary consideration to the palace intrigues that the producers focused on to delude themselves that they had a sci-fi Game of Thrones. 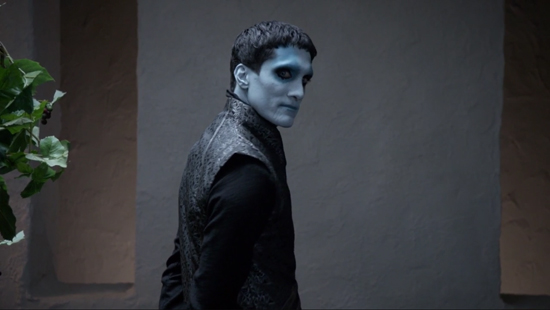 Again ironically, the usurper’s name is Maximus, but there his resemblance to a Roman emperor ends, while the pastimes, temperament, worldview and wardrobe of the new S.H.I.E.L.D. season’s master villain are direct derivations from classical tyranny. We meet him in a disorientingly idyllic suite above the squalid bowels of the outerspace bunker that the remainder of the human race subsists in. Such bubble realities are a defining motif (including an “opium den” of VR escapism for the dispossessed). The conflict of whether to resist or withdraw, and the moral question of who can afford and who pays for each reaction, is sharply recognizable to those who’ve survived the first year of the Trump regime. Divide-and-conquer hierarchies and selectively favored pet slaves are straight from the plantation and concentration-camp playbook, but the scenario goes beyond survival-of-the-fittest tensions, evoking the in-fighting and forsaken friendships occurring within (let alone between) both “red” and “blue” believers living under the battlefield paradigm of post-2016 America. Still, the model of the captive human herd seen here is less prison than bazaar; absolutely nothing can’t be commoditized (“A Life Spent, A Life Earned” is a guiding mantra to sanctify the social Darwinism). Under a President who can’t get through one speech without pitching one of his commercial properties, this could be humorous, as was a similar satire a political lifetime ago, when Star Trek: The Next Generation introduced the not evil but venal Ferengi (to general audience bafflement in the Reagan years). With stakes having risen like sea-levels, the metaphor is just terrifying, and so far this season of S.H.I.E.L.D. is one of the very few works of fiction that has ever genuinely, viscerally scared me. 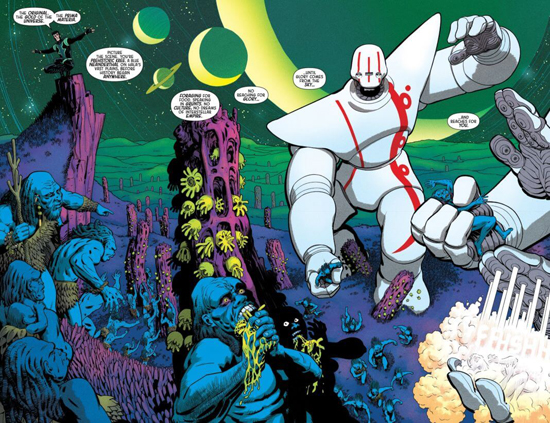 When you’re fighting for your life things of course can get messy, and in these first two hours superlatively valid social panics about scarcity, control and male dominance run side-by-side with vintage phobias of foreign conquest and dehumanized existential opponents. These, however, are ghosts of fables past which haunt the narrative (the effete Kree ruler, his dominatrix-like lieutenant) without taking possession of it (as in, say, Frank Miller’s 300, especially the movie). There are curses we doom ourselves to repeat; in the current Inhumans comic, Royals, writer Al Ewing establishes a pantheon of frightful cosmic archetypes who experimented on the primal Kree themselves, thus portraying the Kree’s later exploitation of other races as a kind of conditioned, endlessly reenacted trauma. The real breakout that the heroes of S.H.I.E.L.D. are attempting, is from cycles like this.

S.H.I.E.L.D. also plays its sci-fi movie-serial tropes with awful realism and a critical eye, whereas The Inhumans show had one job — to give us a look inside the kind of mythic societies that bygone, normative white male pulp adventurers would breach, and show us how these peoples operate when on their own — and committed to it in no way. Inhumans’ other core mistake, though hardly a novel one, was to ask us to care about the rift between royals and peasantry from the royals’ point of view. The new season of S.H.I.E.L.D. is told from the ground up. The cliché (and no small portion of the actual history) of superhero fiction is that it’s an immature fantasy about what it would be like to have preeminent power. S.H.I.E.L.D. is in the vanguard of popular vision about what might be free to flower if no one had it.