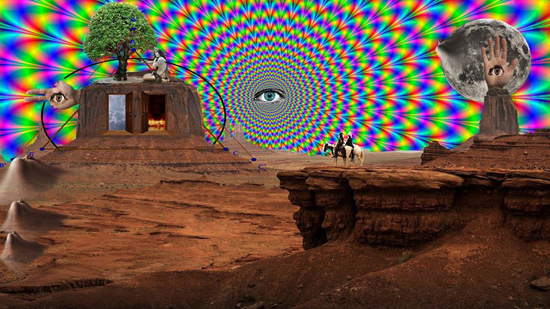 We may end with a bang, but we live in a whimper. The overwhelming mood of Philip K. Dick’s original Do Androids Dream of Electric Sheep? was one of a world grinding down — gradually abandoned by those who could afford Mars; silted over with the dust of toxic residues; going through motions that might as well be programmed whether you’re human or not. In indie drama company Theatre of WAR’s new work Call Me Fury: An Anti-Western, life in a corporate principality in near-future Oklahoma creeps along like its large enslaved population’s generic workday. In the greenhouse climate of the first movie version of Dick’s novel, Blade Runner, the skies are metaphorically weeping at almost all times; Call Me Fury’s resurrected gunfighter protagonist sleepwalks through his own destiny.

Blade Runner, of course, has just been brought back to life too, in the latter-generation sequel Blade Runner 2049, and it is also preoccupied…pun intended, I guess…with involuntary servitude. The elevation of a kleptocrat to the highest office in the real world’s most dominant country has accelerated Americans’ awareness of the far-off de facto indenture that supplies the devices we’re most dependent on, and which has come to define the low-wage and gig-based economy for most of us here too. Blade Runner 2049’s creepy corporate prophet (Jared Leto) openly preaches the virtues of a slave class (the Replicants, refined to be more controllable in this version, or so he thinks) as the engine of social advancement (that the masters benefit from and take credit for). Call Me Fury imagines a conflation of conqueror-capitalists with Cliven Bundy-type secessionist/occupiers, who take over a swath of land at the center of post-America. Blade Runner 2049’s protagonist is on a quest for a buried blessing, while Call Me Fury concerns itself with sins resurfacing.

Retired lawman Mavis (Lilja Owsley) refuses to sell out his farm to an energy concern, and soon gets gunned down by the corp’s potentates and the current cops they’ve bought and paid for. In 2033, by which time the oligarchs have taken over and uneuphemistically enslaved much of the local 99-percent, Mavis (an archetypal White champion) is reincarnated as Lone (the type of Black avenger that populates the royalty’s worst nightmares). He is their transgressions come back to hunt them, and his deliberate lope along their trail is the meat of the techno-Tarantino narrative that then unspools.

As in all the most troubling fairytales and Dickens dramas, both Blade Runner 2049 and Call Me Fury center at certain times on children. The movie’s scenes of a vast tech-scavenging sweatshop full of orphaned kids is as vivid an image of the hell this planet is going to (and which many have already reached) as I’ve ever seen, while the play centers a lengthy setpiece on Lone’s bloody rescue of an Oklahoma serf’s baby from a child-molesting house-invader. Portrayed in weirdly clinical language (the villain is consistently referred to as “the pedophile,” as in some police report), the scenes accentuate the sickness of ancient folkloric tales and the social ills they were created to process — the mother is simplistically helpless; the pedophile threatens to literally eat her baby like some ogre; classic fables and modern phobias converge. 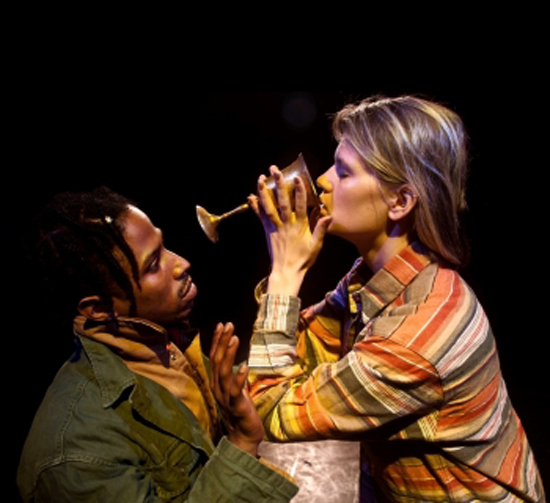 We are far from fairyland, and from anything funny; playing Mavis (in the play’s past) and “Doc Hendricks” (a frustrated scientist and ally to Lone in the play’s present) as well as a plummy narrator and an impersonated Germanic aristocrat, Owsley is often a hilarious sendup of old-movie stereotypes, but in this nightmarish context the humor falls as flat as a dead resistance fighter, and means to. This play is at times unintendedly laborious to witness, though it is advisedly grueling; Blade Runner 2049 scarcely ever lets up the paradoxical lyricism with which it pictures a pall of remorse (lead character “K”’s fragile love-affair with an AI; his police-chief boss’ stoic devotion to an inequitable social order; Rick Deckard’s haunted exile).

Not a newly engineered lifeform like K (Ryan Gosling) but a reconstituted corpse, Lone (Joseph Pryce) has a somnambulant calm and a tortured elegance — Pryce embodies his role with too faint a voice but an astonishing repertoire of halting, limping, crawling, sinuous, mesmerizing motion; an understated but bravura ballet of burden. As one of the oligarchs, “Speaker Blossius,” Chet King is manic and terrifying, like some parallel-universe Jerry Lewis who starred in Ionesco plays (also instinctually eliciting laughter which is at once canceled out by his virtuoso creepiness). Call Me Fury doesn’t connect enough dots between our current era and the rampant feudalism the play depicts, but as a portrait of the entitled tyrant’s true id turned inside-out, it’s frighteningly, courageously accurate.

We need to be put through these narcissists’ tantrums and monologues to summarize the oppressiveness of what Trump’s class has in store for everyone, though several of the play’s scenes seem over-elongated, like improvs that the game, gifted cast and director grew too attached to. The grindhouse-guignol shootouts and gang-rapes and retribution bloodbaths can drain purpose from the narrative’s finer points (like an intriguing suggestion of some mystic-tech method for Lone’s re-creation which is never delved into). The play’s heart is in the right throat, though — Blade Runner 2049 is inexplicably, indefensibly short on Black characters (or even extras), whereas in the world of Call Me Fury, the standard White hero has to literally be killed off for a self-possessed Black protagonist to rise in his place.

In Blade Runner 2049 there is a motif of lonely, open hands; in Call Me Fury’s minimal retinue they symbolize weapons, except for one last clasp. Both stories end on a note of tenuous gentleness. There are no calms except those between storms, and to live is to one day mourn. But seeing each other in the moments when the deluge clears shows us a world where no place is empty.