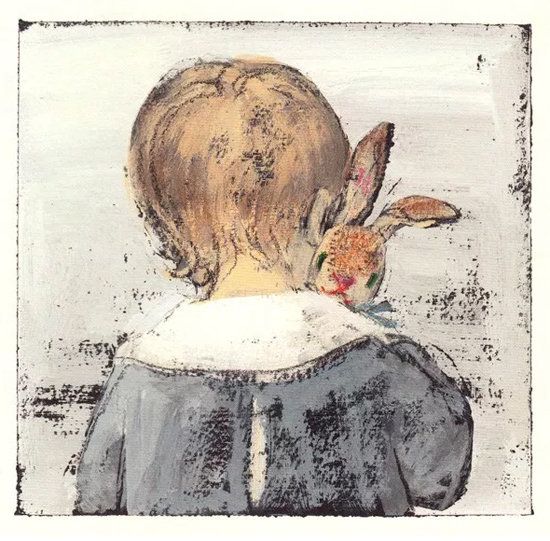 True love doesn’t take real people. We invest some of our earliest and most intense emotional attachment in ostensibly inanimate companions, the stuffed dolls and pull-toys and even favored blankets of our infancy. These are our training models for human interaction; recipients of the care we get from elders and even at that early stage have an instinct to emulate; the first test that shows we can give love whether or not it could ever be returned — imaginary friends can be the object, and even the reflection, of genuine affection.

All those lost-toy stories of childhood had a special effect on me — the discarded confidant, the earliest life partner left behind — from The Velveteen Rabbit through (in my second or third childhood) the discarded, sentient but unnoticed animal appliances in Mark Russell & Steve Pugh’s melancholy vérité Flintstones. Figures who can be brought to life by love, or have been real all along but never acknowledged. I seriously believe that the distributed consciousness at work in my youthful conversations with bedrooms-full of semi-plush alligators and beagles and babies and Batmans left some of that consciousness imbued in each of them, time-capsules of when I could hear them speak back.

Painter Oskar Kokoschka is infamous for his doomed affair with and subsequent life-size effigy of composer Alma Mahler, a kind of variant on the likeness that influences desired ones’ feelings in fairytales, albeit after-the-fact and beyond hope. The sexbots of contemporary fiction and near-future speculation are not necessarily based on anyone; an upgrade but not an improvement over Kokoschka’s puppetry.

Love in the age of mechanical replication is itself just a new model — projection onto the love “object” goes back as far as mythic sculptors falling for their own statues, and males to this day don’t necessarily recognize their lovers as real. I started getting crushes way ahead of my time, but took even longer ’til I had one on somebody who technically exists. The ’60s Britpop diva Petula Clark; Carol Merrill, the woman who did Vanna White duty on the Let’s Make a Deal gameshow; a brief thing for Jonny Quest’s stereotypical best friend Hadji and a several-year obsession with Mari, the polymath secret-agent-girl on Johnny Sokko and His Flying Robot; and if I’m honest, David Cassidy — all of whom I met on-screen and who never knew it. 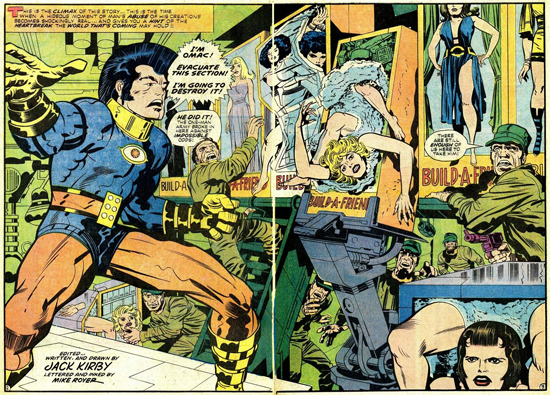 Between my kid crushes, I was there at the drugstore the day Jack Kirby’s dystopian OMAC comic first came out. Its office-drone protagonist (“Buddy Blank”) doesn’t know that his robotics company is fabricating fantasy gynoids to send to prominent old-boys in business and government, and then remotely explode to fill the order of a buyer who wants them assassinated. So Buddy also doesn’t know that the only person who’s ever kind to him, his workplace friend Lila, is actually one of the bots, being beta-tested for her social skills. When a global police-force enhances Buddy at random (and without consent) by long-range mutating beams so he can become a “One-Man Army Corps” to stop such crimes, he blows up the factory after saying goodbye to Lila, already disturbingly disassembled and in her shipping crate, looping an empty Alexa-type greeting. Each of them is created to destroy, her with sex and him with violence as per their inscribed gender destinies — but it falls to the male figure to destroy her too, and snuff out the love already disappearing from his fading human self.

We want our feelings returned in a form we can recognize. But we only locate our place and learn who we are when the thing or person we adore takes up a life of its own.