THIS: What Goes Naturally 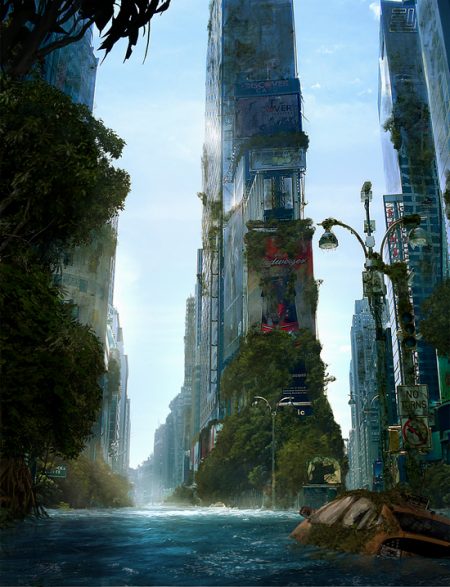 “In 40 years, there will be deer grazing in Times Square,” Timothy Leary prophesied in 1967 — and whether this was a utopian promise of renewal or a threat of collapse to the technological/industrial hierarchy is hard to say in retrospect. Not long after he said it, his countercultural flock would be dispersed, the army they’d been trying to stop on the opposite side of the planet would collapse, and the rustic vision in Leary’s language would be achieved in Cambodia once that army had illegally bombed them back to the land.

The Khmer Rouge’s agrarian dictatorship, distrustful of the corruptions of modernity, was the mirror image of the “developed” world’s own phobias. We didn’t really want to go “back to the garden,” as Joni Mitchell’s classic anthem affirmed, and even at the time she knew she was writing a postmortem for the hippie era’s ideals. Be it commodity fetishism or genuine escape from working-class drudgery, we were terrified of slipping back to the “simple” life we said we wanted. 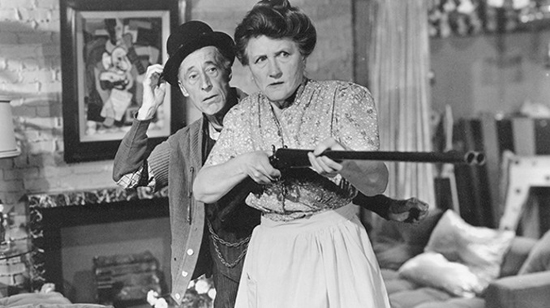 This was part of why hayseed stereotypes of rural America were popular from the time that the nationwide demographic balance started to tip from farm to city; the L’il Abner comic-strip burlesqued the bumpkins we wanted to assure ourselves we’d moved beyond, and Woody Guthrie’s fabricated downhome radio persona let listeners condescend to the “authenticity” of a life close to the soil while keeping it securely fenced off in the past.

The backwoods stereotype was fueled further by the struggle against segregation, which gave sitcoms like Green Acres an extra layer of subtext for Northerners to feel superior (while not actually representing or speaking to any Black viewers). 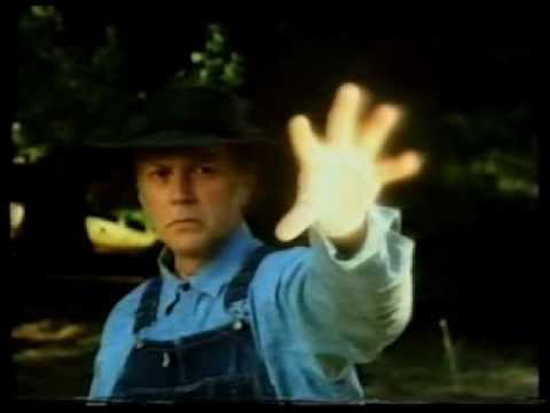 But the city/country divide, then as in the “heartland/coastal” conflict said to be splitting Trump-era America now, was closer to home. Modeled primarily on the cultures of “plain people” (Amish, Mennonites) in the North, the 1972 TV-movie The People portrayed puritanical restraint as the survival strategy of a group of humanoid extraterrestrials not wanting to draw attention to themselves. Based on Zenna Henderson’s sensitive story-cycle, this compassionate adaptation nevertheless underlined the idea that taciturn farming communities might as well be aliens; not only was the past a foreign country, but the country was another planet.

Wealthy Victorians had engineered replicas of ruined architecture overgrown in their gardens, a memento mori for eden and metropolis alike, and by the 1970s, alongside the dystopian genre that had emerged with industrialization long before, the “disarcadia” took root in popular Western imagination. The adobe-and-wood, post-combustion “Ape City” of the Planet of the Apes films was an emblem of decline, not renewal, and John Boorman’s obscure classic Zardoz (1974) depicts a far-future Earth where barbaric nomads range bombed-out cities while an elite class of telepaths takes refuge in antiseptically (and deceptively) idyllic agrarian enclaves. 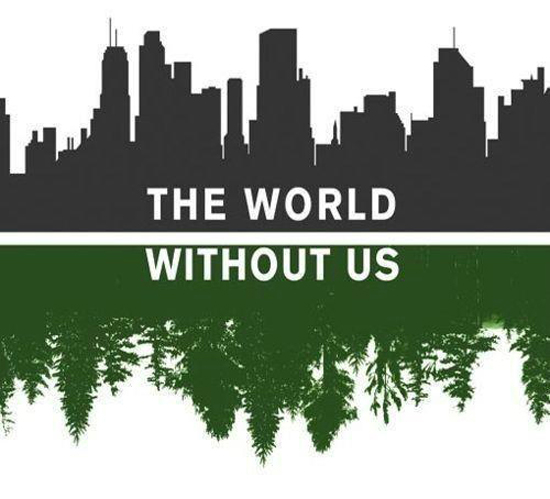 20th-century First Worlders’ heroes would battle nature — Conan Doyle’s Professor Challenger finding still-untamed dinosaurs in The Lost World; Jack Kirby’s Kamandi fighting his way through a semi-civilized wilderness of talking, upright tigers, rats, apes and snakes — and when environmentalism had made its mark in the 21st, our popular fantasies and speculations would turn to the idea of declaring surrender. The bestselling The World Without Us ran a narrative simulation of how nature would reclaim or transform the planet were humans to disappear (more rapidly than we’re on-schedule to), and was received with a kind of wistfulness (which is already starting to feel naïve and nostalgic, as at least one of the book’s conjectures, about unattended Texas chemical plants igniting, has come true in the Hurricane Harvey disaster as I type this). “Ruin porn,” elegiacally photodocumenting the rotting monuments of the grand architectural past, has taken the place of the Victorian era’s sentimental simulations, and the Will Smith version of I Am Legend was a huge hit, depicting him as castaway on a Manhattan Island already overtaken by rampant greenery and wild species after an evacuation he declined — a kind of reverse Robinsonade in which all of society has left him.

At the end of the 1980s the Talking Heads hit “Nothing But Flowers” had burlesqued the idea of disarcadia, focusing on a nostalgia for processed foods and heavy machinery in a future sylvan utopia; the I Am Legend movie reminded us that, with few enough people, the groves of canned fruits and shrink-wrapped twinkies might last for centuries. 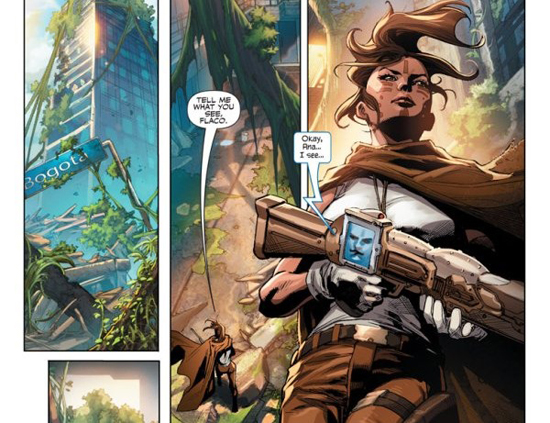 “Life finds a way,” we are reminded in Jurassic Park, which of course is set in an engineered forest primeval whose murderous predators we’re meant to side with, and in real life the products of human society and the creations of nature will probably find a way to comingle. The salvaged/organic encampment in Beasts of the Southern Wild is a model for post-climate-change adaptation and community. In Fred Van Lente & Stephen Segovia’s biting and brilliant new War Mother series from Valiant Comics, tribal settlements two thousand years from today are attuned to arboreal ecosystems and symbiotic tech as forests swallow the dim past’s towers, and a ritualistic tension between dominating technophiles and egalitarian naturalists plays out (as well as a grand satire of urban colonists and displaced populations to match the tragic allegory of overdevelopers and indigenous locals in Beasts).

In gentrifying Brooklyn, the massive, controversial, biomorphically-shaped Barclays Center arena is built with intentionally oxidized metal cladding and is now sprouting a roof of grass. Part supersized Victorian folly, but also part of a widening movement to introduce airborne green spaces on urban surfaces to combat the atmospheric effects of fossil fuels, it may be a sign that we have a garden to look forward to as well as back on after all. Deer may never graze on Times Square, but to see munching goats and urban herders contentedly maintaining the grass ceilings of the next midcentury megalopolis could be awesome.