THIS: Join, and Die Anyway 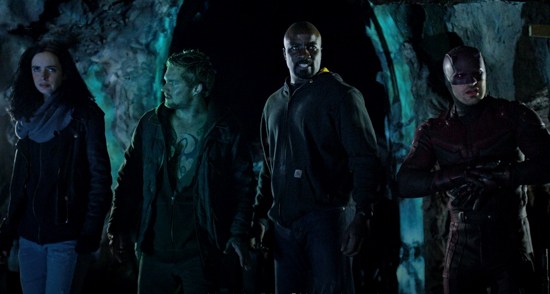 Jefferson personified the Head and Heart and portrayed them as separate entities at war within him; in the modern era we talk about what our “gut tells us,” and biologists have been backing this up. We got used to missing limbs and phantom loved ones after 9/11; many of us know (or are) people who waited daily for news of hands, or a toe, or some DNA that would let them know what their friends and kin had come to, and in this decade beheadings get uploaded faster than our social lifelines can block them. The Defenders series on Netflix focuses on several semi-heroes who are each broken in several places themselves, let alone able to bond together; the “street-level” counterpart to Marvel’s cosmic-scope Avengers, they are analogous to a “home front” that is just as fractured as the warring world. 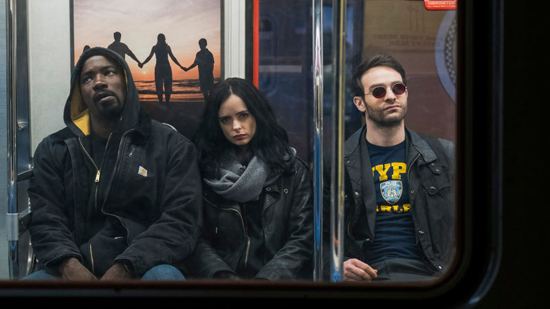 The two seasons so far of Daredevil, and one each of Jessica Jones, Luke Cage and Iron Fist all converge upon this 8-hour crossover, and series creators Douglas Petrie & Marco Ramirez and co-writer Lauren Schmidt Hissrich do a skillful job of making the pieces fit alongside each other and not forcing them together. Like a noir German Expressionism, each character’s signature color surrounds them in lighting and clothing; cinematography and background music enfold them like a graphic aura. Their antagonists are the shadowy, ancient global cabal “The Hand,” whose five immortal figureheads call themselves “fingers”; The Defenders meanwhile come together by chance and are usually coming apart at the seams, while ostensible mortals like nurse Claire Temple, martial-arts teacher Colleen Wing and detective Misty Knight keep trying to remind them of a whole that’s greater and more necessary than themselves. 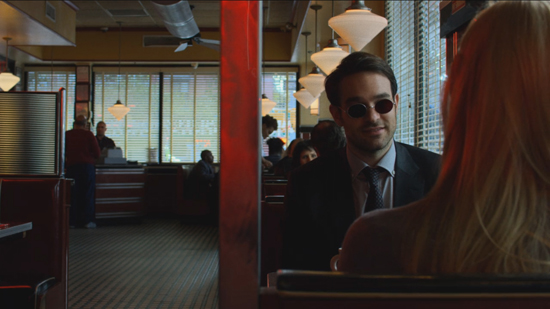 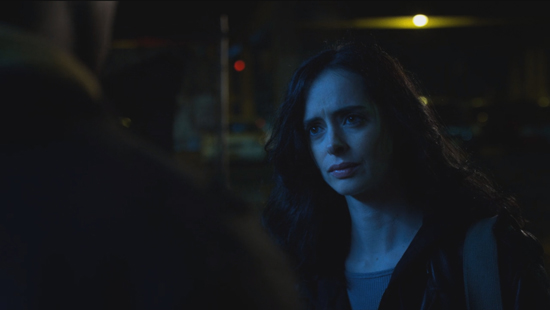 Civic legend Luke is determined to run toward the needy regardless of personal consequences or broader context; accidental champion Jessica is bent on keeping as far away from others’ problems as she can; Matt Murdock/Daredevil subjects himself to certain violence and possible valor out of sheer compulsion; while Iron Fist/Danny Rand is all purpose and no personality. The frictions between them are the core of the story, as when Jessica (without contradiction) accuses the three male members of being in this adventure for the combative thrill, or when Luke gives Danny an instant-classic dressing down over his privilege and how it drives him to rely on force because he can, rather than using his social power for good as he could. (Just as central are the moments at which the characters try to bridge the gaps, as when Jessica and Luke discuss self-preservation vs. community purpose and neither is wrong — or at least bad — for what they feel; or when some foxhole camaraderie and lowering of guard develops between Danny and Luke.) 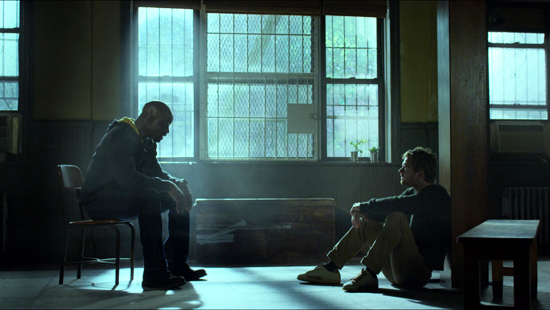 To fit our worldwide slide back into the bronze age, the series shows more stabbing than shooting; premiering days after the killings in Finland, The Defenders brings the intimate contact and cost of such combat into our faces. Severed limbs are a typical price paid by protagonists, and lost heads are a common solution to the villains’ attacks. The Hand stole an ancient process for curing all ailments and horded it to give just themselves eternal survival; a clear confrontation of have and have-not, with battlefronts in the dispossessed, employment-hungry communities and shiny but shadowy highrises of NYC. 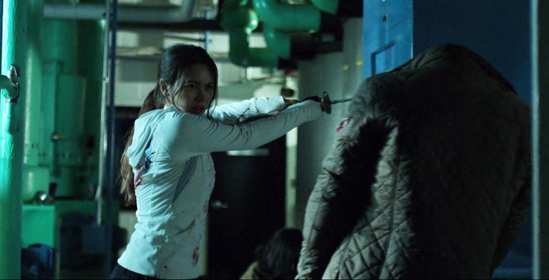 Anyone else’s bloodline is made to be cut; the Bible speaks of children growing away from their parents as a “cleaving,” and early in the series we see several allegories of ambivalent or failed parenthood which drive the characters on to make right what they can. There’s a blunt, brilliant anti-motivational talk from Matt, in his dayjob lawyer persona, to a kid disabled by a careless construction firm whom he’s just won a huge judgment for, about how hard life is still going to be for him, how much contempt or condescension he will face, how alone he’ll have to face it and how strong he doesn’t yet know he is. Luke gives a speech of reassurance, and a perhaps unfulfillable pledge of protection, to a local youth he’s trying to divert from desperate self-destruction. Jessica is dismissive of a missing-dad case that there’s more to than she first realizes, with insults traded between her and the man’s disaffected daughter (whom Jessica’s own abrasion is helping turn into a replica of her worst self). Urban-sensei/Daredevil-mentor Stick and the Hand’s current ruler Alexandra take turns being very bad role-models to resurrected assassin/antihero Elektra, and severed ties are to be expected between both these elders and their charges. 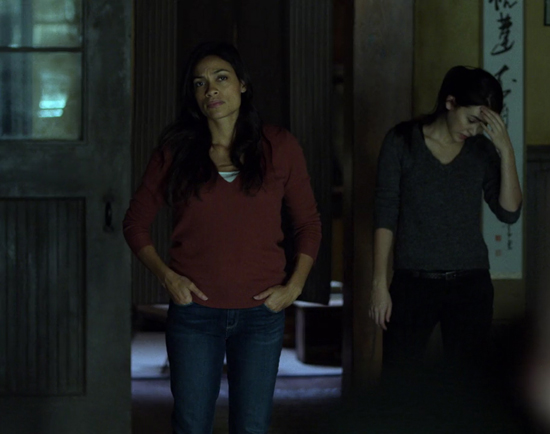 It’s inevitable (though the sharp, sensitive writing makes it never look easy) that the four headline characters will realize the wisdom (if not the virtues) of hanging together rather than going it alone. The dust from this settles unevenly, and the closing episode’s climactic battle goes on somewhat too long, but even this serves as a kind of overstretched narrative spring that snaps apart into some well-considered, credible aftermaths (a few reconciliations, tentative renewals, apparent tragedies). Long-time comic-heads will recognize the several series and storylines that are being set up, and this cracks the plot in pieces right toward the end — but what we knew from the start is that these lives were made to go their separate ways.