THIS: Bangs and Whimpers (1)

One in an occasional series of essays considering the incendiary everyday lives and strangely drab dystopias of 1970s cinema.

The upside of apocalypse is that, by definition, you can get out of it. The films of the 1970s “golden age” tended toward worlds-without-end even when they were about ends-of-civilization-as-we-know-it. The decade felt inert, and the blighted over-realism of its films’ style demanded a future that looked just as dingy as the entropic present.

Of course, several worlds had ended, and there didn’t seem to be much prospect of a better replacement. American triumphalism was gone with the Vietnam War; American goodness was gone with the stifled Civil Rights movement. There was less and less bread to win, and with the forceful disappearance of benevolent father-figures like JFK and King, Daddy had left home for good.

Words tended to fail, and so, for the ones set in the then-current day, compulsive-talker titles tried to fit in as much as was going wrong: The Effect of Gamma Rays on Man-in-the-Moon Marigolds (1972) revisits the split-up nuclear family after daddy is long gone. The sense of abandonment is palpable; alcoholic, underemployed single mom Beatrice Hunsdorfer raises her two daughters (persecuted tween science-geek Matilda and uneasily popular teen Ruth) in a Victorian house that seems to be disintegrating as we watch, in a neighborhood that looks hallway to the images in those books about overgrown cities on an Earth without humans. The refugee family is completed by “Nanny,” an elderly woman Beatrice puts up in a spare room, for cash from the woman’s own neglectful daughter. We’re at the dead end of the post-WWII suburban dream, a modern Dickens landscape from which Nanny’s daughter goes off to some unspecified cosmopolitan job, and Beatrice sometimes ventures into the idyllic suburbs to beg money from relatives, each location seeming like some passing hallucinatory paradise. 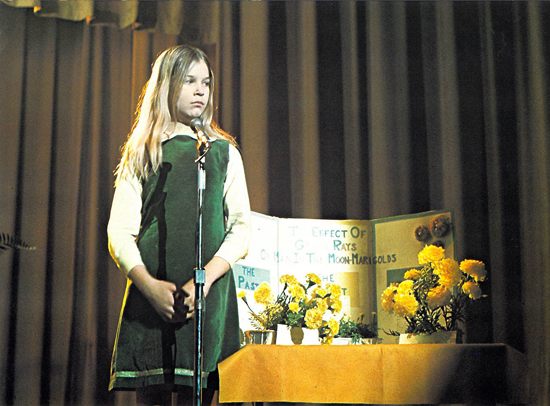 The sympathetic portrait of women left to survive as second-class citizens yet sole providers is rare for the period, even as the reminders of my own unfit parenthood (and no-doubt many other viewers’) in that era are vivid, and the similarity of Beatrice’s grandiose delusions and self-heroizing speech patterns to those of our current president are eerie.

Belittled by her threatened mom and piling-on big sister, Matilda is a budding scientific genius studying the variant outcomes of a species of flower whose seeds have been exposed to radiation at varying degrees. Her lyrical science-fair soliloquies on the possibilities of this miraculous intervention are a skewed sermon on the randomness of destiny and the potential of transcendence, though given her own toxic home environment, the perception of creation primarily as survival of violence is personally true.

Historically, too — the kind of prophecies that could be heard later in the same decade from the podiums of anti-nuke rallies about an unrecognizable Earth are here cast as a kind of deliverance. Cleaning the slate was a preoccupation of a certain kind of pop-culture as the tense 1960s changed in-number-only to the anxious early-’70s. Charlton Heston had famously railed against the bad forefathers of the 20th century for having reduced the world to nuclear rubble and a Planet of the Apes in the franchise’s 1968 debut, but by the first sequel in 1970, his biggest idea was to finish the job with an unexploded “doomsday” bomb.

Everyone knows the outlines of this franchise; featuring big bad predator figures like the fairytales hatched in a time of vast unknowns, it’s one of the major mass-myths from an epoch of zero comforting mysteries. So there’s no spoilers in saying: we’re all gonna die. Notably, Heston’s character only comes to this conclusion after witnessing not the cruelties of the ape society, but the distortions of the mutated humans, with their boosted intellect but stunted conscience and their literal worship of militarism. It’s your own family you can most not stand.

The rubbled New York City of Beneath the Planet of the Apes was pretty close to the grimy shitscape of contemporary crime-drama legend and rightwing rhetoric, but it gave way to the gleam of LA for 1971’s Escape from the Planet of the Apes, in which leading chimps Zira and Cornelius get thrown backward in time by the nuclear destruction of their future-Earth, to an America whose soulless post-counterculture glitz the movie needed to accentuate in contrast to the homespun integrity of these peaceful successors to humanity.

Caesar of course leads a violent revolution against the humans who have bred simians as slaves, delivering his victory speech against a backdrop of flaming highrises in a surrogate bonfire for anyone who by then felt it unfashionable to cheer the urban uprisings of the preceding several years. But it’s clear that conventional chaos will not be enough; even though in this loop of the timeline the apes gain sentience and take control while the human society is intact, we’ve still got the first film’s nuclear holocaust to look forward to. Like a perverse biblical prophet preaching the de-creation of the world — “when the sea is a dead sea, and the land is a wasteland” (an interesting counterpoint to the missile-worshipping mutants in the second film) — Caesar proclaims his assurance that the humans are close to wiping themselves out of the apes’ way.

We’ve reached common cause with the gospel of the abused young girl from Gamma Rays, a faith in cleansing fire. We feel we deserve vengeance, like Caesar, or can expect reward for patience, like Matilda. Probably no one and nothing is watching over us. But it means we’ve outlived our trials if there’s an end we can watch.