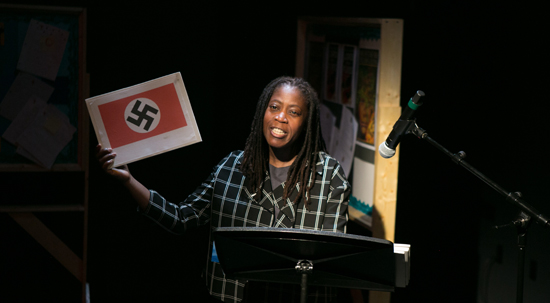 What you do know and don’t say can hurt someone. Conversations not held are the risky terrain of Crystal Skillman’s new play The Test, a Trump-era highschool drama in which symbols speak for themselves and drown out other types of dialogue.

A swastika has appeared carved on a desk in English teacher Ada (Mary E. Hodges)’s class, throwing the school into a cyclone of suspicion and antagonism. (When I was growing up, you couldn’t go into a classroom or a bathroom stall without seeing at least one Nazi-sign, along with the penises and F-words, but the smallness of this gesture and the immensity of the combustion it sparks speaks to how stifled discussion in America has been, and how policed the outward forms but not underlying impulses of hate have become.) 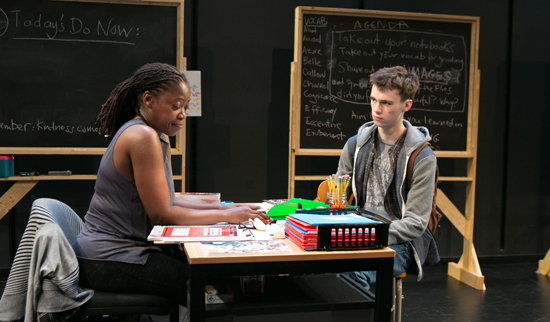 The world inside the school walls is already one in which active-shooter drills are common; the world outside is one of a semi-impoverished, semi-gentrified city neighborhood. From the “wrong side” of that divide, low-income-household white-kid Milo (Eric Wiegand) is assumed to have carved the offending symbol, but nobody has proof. Ada is tutoring both Milo and her activist, African-American student Zarina (Angel Moore) for upcoming college-entrance exams, which counterpoint the social trials they are facing while seeming to fade farther and farther into abstraction. 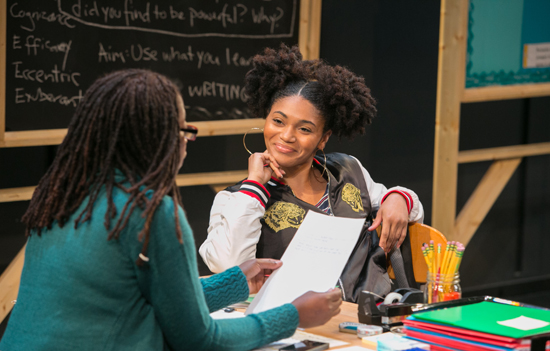 Ada is trying to maintain a normal that no longer applies, and believe it hard enough that the students can follow in the direction she still sees. She’s also trying to grant the neutral ground these nascent citizens urgently need, as Milo’s family support for Trump marks him rightly or wrongly as bigoted and Zarina’s passionate opposition to what Trump stands for fuels her sharply divided view of the world. Milo’s dead-end prospects as a blue-collar youth and Zarina’s endangered future as a Black woman make education’s escape-route seem unlikely to both of them, while Ada has reliable confidences or firsthand knowledge of things about each which could hold them back forever.

Living past unfortunate origins and mistaken decisions is one gift she’s trying to give them, and her expectations are subject to constant reassessment — Paige (Taylor Shurte), her best friend amongst the teachers, turns out to be not quite what she seems (even though this White woman and Ada assume they have certain age and class affinities, until one of them doesn’t), while the volatile, desperate Milo may have been misjudged. 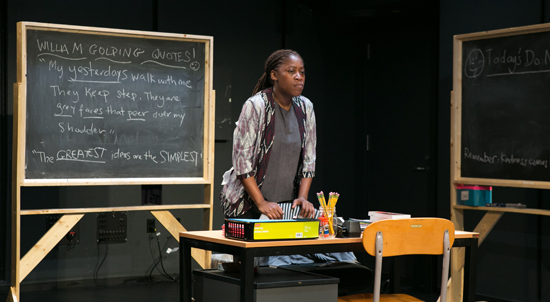 The real lesson here is for the adult audience, in a country where what you have determines how little consideration you give for those you see as not being like you, and how much you don’t have determines how blindly you lash out. In a society that proclaims the fairness it doesn’t actually live, class dare not speak its name, so it’s easier for us to think of each other as amoral snobs and racist bumpkins.

The Test turns away from all these stereotypes, in its compassionate, thoroughly imperfect portrayals of every character, and not least in a plea for independent thinking, individual accountability and the worthwhile risk of reaching out that Ada makes in an unconventional assembly toward the play’s end.

With embattled integrity, inner emotional conflict and titanic, tenuous calm, Hodges gives the performance of the year as Ada; Wiegand’s wounded, seething yet sympathetic Milo is a work of emerging genius; Moore is ebullient, enraged, electric and tormented as Zarina; and as Paige, Shurte balances innocence and self-interest in an oblivious but not one-dimensional way. 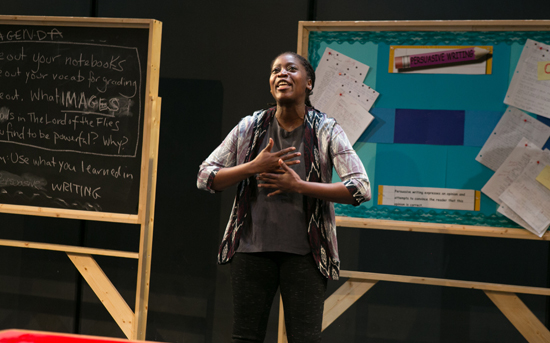 Not everything works out. Paige and Ada’s relationship seems a bit expository and artificial at times; there are a few moments when Hodges’ own depth saves her character from some flashes of melodrama written for her; and a briefly recurring thematic motif is based around a symptom of cognitive dysfunction that Skillman mis-defines. But the playwright and cast’s compassion and clear eye for spectrums of gray far outweigh this, and there hasn’t been a day I haven’t thought about The Test since seeing it. Across our country, it’s long past time for pencils down, and this is not a play that’s meant to give anyone all the answers. 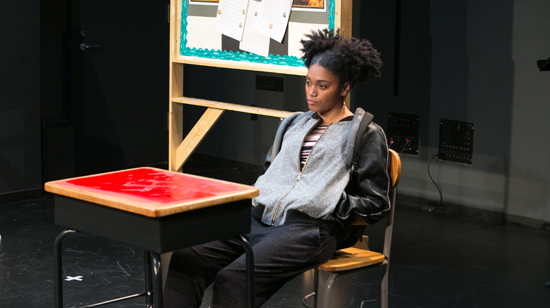 The inconvenience of dictatorships, of course, is that what counters them and what’s opposite to them are not always the same thing — polemic is a reflex, but for The Test to pull off a significant tragedy based on the farce of Trump ruling is a rare feat; farces that take down the scale of tyranny’s tragedy are the more naturally rebellious and potentially effective response…though for these to truly hit the regime where it hurts rather than just graze its ego is also not easy. 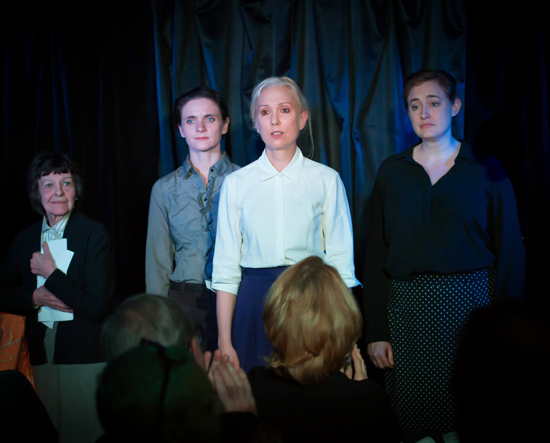 Escaping into a past to strike from has been one fruitful strategy in recent work, accentuating the anachronisms that authoritarian systems try to return us to. The Trump era’s success in making American punk and its Great Depression relevant again was a repeated refrain in a June performance by the fictional lounge band The Bobby Oahu Combo, in which perpetrators Josh Hartung and Jenny Harder delivered a rollicking folky “Kill the Poor” (by the even-Dead-er Kennedys) and an alternating medley of Leonard Cohen’s “Everybody Knows” with “Brother, Can You Spare a Dime.” In April, Edward Einhorn and Jenny Lee Mitchell’s astonishing Cabaret in Captivity harkened to the humor and hope that artists imprisoned in the Terezin concentration camp insistently affirmed in the shows they put on in this “model” camp (underscoring the loss of these voices even more starkly). 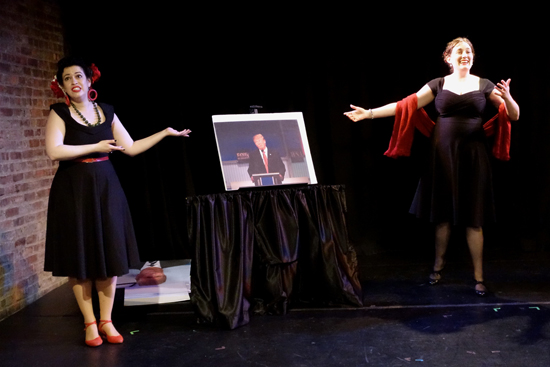 Suspended dead-center in the abyss between the two, Ti Adoro, Herr Trump! concluded its initial, short run in Brooklyn last week, but you can’t keep a good outrage down. I came expecting beautifully sung, numbly appalling irony, but failures of imagination are how all yer classiest dystopias start. Ti Adoro is sheer evil genius, presenting pop-aganda songs from Fascist Italy and Nazi Germany in a context that makes them feel like they took over the charts just yesterday, or last November at most. Operatic vocalists Amanda LaPergola and Andrianna Smela incarnate larger-than-reality divas Margharita Isabella Eccessivamente and Ilsa Schadenfreude, pining for their lost loves Benito and Adolf and delivering real-life mob-pleasers from the fascist-era airwaves. Literal zeitgeists, they have somehow been reanimated like bounced-back radio waves with the resurgence of authoritarianism in America, celebrating their own comeback, hailing Trump, and updating the lyrics of some Hitler-extoling anthems with troubling ease. 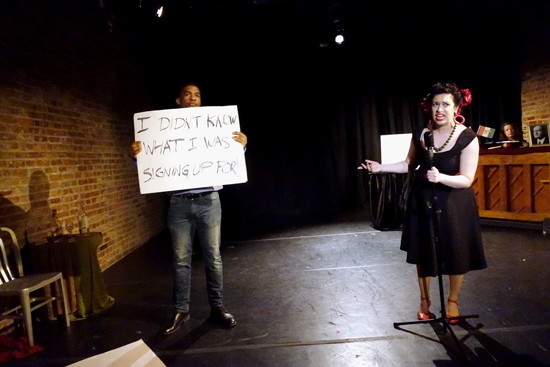 Musical Director and onstage one-woman-band Maria Dessena keeps an expert deadpan detachment, and the despotic duo’s “intern,” Brian, maintains stone-faced chagrin and mounts silent rebellions throughout the show. The tensions between Margharita and Ilsa’s national egos, and between them and their African-American “uncompensated laborer,” speak encyclopedias about the unsustainable conflicts between any two or more personalities that feel themselves supreme, and the weird bonds and hypocritical admiration that the dominant have toward the conquered. Brian makes almost as big fools of his bosses as they make of themselves, while being an intrepid voice of reason that the music is designed to drown out. Toward the end, the show’s, and the singers’, own sense of reality is subverted in unexpected ways best left for future viewers to find out, but suffice it to say, old affections can shift when there’s a new dictator in town (and rides in on a horse). 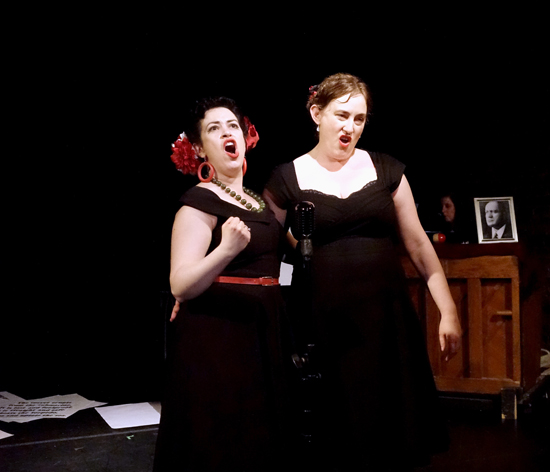 Director Emily Edwards (probably not coincidentally a dancer and choreographer too) orchestrates this opera-buffa chaos with uncommon, disciplined abandon; LaPergola (who wrote the book and co-conceived the show with Smela) is as always (but more) a Ball/Burnett-level master of comedic suicide missions; Smela (who wrote many of the English lyrics) is a pillar of unwarranted confidence and murderous zeal; and Dylan J. Sampson as Brian is the superlative straightman to history’s divine (and this show’s profane) comedy, suppressing rage and stifling hilarity like a saint or a superspy. Ti Adoro, Herr Trump! needs to be mounted many more times, but it’s just the caliber of bold burlesque needed to blow empires off the world stage.

Both The Test and Ti Adoro, Herr Trump! have completed their first runs, but more information can be found at Crystal Skillman’s website and at this festival page, respectively.