THIS: Out of Many

Self and Other — it’s the 1 and 0 at the heart of America now more than ever as we’re all exhorted to look out for Number One and a unitary miser king expects all us zeros to line up behind him. The uneven duo, dwindling to a single, ended up being the core of all four shows I’ve seen so far in the This Is Not Normal Festival. One act at a time is how everyone is trying to absorb and respond to the still-new regime, and these spare dialogues between individual voices — a form employed by many of the festival’s other 20+ recently-written rough drafts of reality — model the heart and mind rebuilding that needs to take place from house to house. 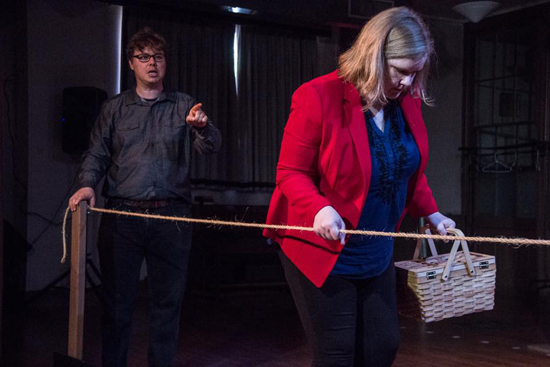 A tyrant may install himself in your head, but only a loved-one can make you think the thoughts are yours. The real history of a dictatorship is untold in the buried minds of those it’s built on top of, which is why playwright Mac Rogers needs no comb-overed Roman emperor to get his point across in God of Obsidian, whose tone of dread is the most penetrating of any drama I’ve ever seen. That’s partially because these politics are personal; there are strategies of psychological imprisonment I directly recognize in this story of a smothering, stealthily controlling boyfriend and the woman who needs to break back into her own mind before she can walk out the door. Rogers describes this as a “fairytale,” and it is by the ancient folkloric definition of cautionary stories grounded in the worst extremes of human behavior. The trappings are there, but perception is what magnifies them — co-lead character Nathan’s house is across a rickety bridge out of The Three Billy Goats Gruff or Python or Labyrinth, and when Alice moves in he keeps her like an ogre’s firebird or golden goose, but the bridge is really just the dividing line between the outside world of equals and Nathan’s deceptively welcoming den of coercive comfort. After a while it might as well be a chasm, as Alice watches the seasons go by like a captive princess in a tower, “cared for” and contained by Nathan’s broad gestures of generosity and almost subliminal underminings of her confidence.

Convincing you that you need your captor, or, failing all else, taking advantage of your charity and what ego you have left by insisting that they need you, is a tactic I know well from abusers and exploiters, and it’s a short hop to demagogues. Still, distorted sentiment works for some better than others; most people don’t seem to be under any illusion that the fierce, mob-like family loyalty of the Trumps transfers to the rest of the country, or, to be fair, that he circled wagons of the Clinton clan do either. God of Obsidian has dialogue that evokes not only Trump’s contemptuous lying and delusional projection, but also Bill Clinton’s ad-absurdum parsings of falsehood and Hillary’s indignant conviction that it’s the revelation, not the act, that is the crime. All of that, on a profound level, is irrelevant, and Rogers is wise to avoid specific allegories; Nathan and Alice’s relationship is the kind of private brutality that politicians just wash over, though some stir and ride the tide more tenaciously than others. Also playing Nathan, Rogers is eerily harmless and cumulatively horrifying, especially to anyone who has had that other shoe hovering over their head; as Alice, Rebecca Comtois gives a quietly titanic performance of vulnerable trust and courageous, embattled self-worth — when she tries to step away she can barely lift one foot ahead of the other, and I could barely stand. This may be the most frightening play I’ve ever witnessed, and the most necessary. The heroine, the audience, and the country walk out into a far-from-certain future. An abuser, at least, really does care what you think; the insulated madman at the top of the world right now does not. I’m not sure which scares me more. 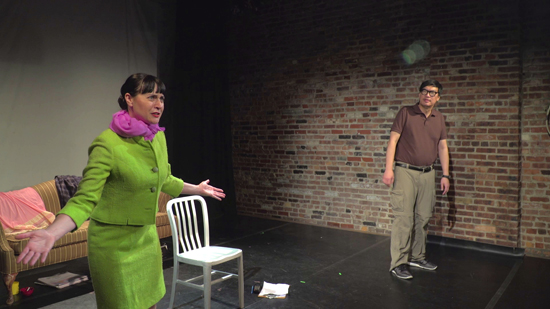 Hot for Feminist Theory Professor (excerpts) is a lesson in all the things its protagonists didn’t mean for you to learn. We’re at the justifiably unheralded, geographically ambiguous College of Low Hills, where a scheduling mishap — or is it fate? — no, probably just a scheduling mishap brings Women’s Studies instructor, Professor Losst-Keyes, in contact with administrator Dennis Quan of the Office of Pedagogy and Learning. They each think they’re in charge of a double-booked classroom, which then becomes a minefield of the modern etiquette of privilege and dissent, consent and defensiveness. The very real problems of men not knowing how to act and women eternally on their guard (including men who don’t care either way and women who have every reason to) are pointed out from a sidelong burlesque and succinctly brilliant premise: Losstt-Keyes is portrayed as being as hysterical as men think women are, and Quan as being as unshakably reasonable as men think they themselves are. The histrionic, pretentious Losstt-Keyes and the clenched, AI-like Quan are opposites genuinely attracted to each other, in a courtship of outsized trials (Losst-Keyes ties Quan up to experience the social constraints of women) and clueless social-cue-lessness (Quan double-checks that the sex they’ve just had is consensual, and takes Losstt-Keyes up on propositions of polyamory she only means in the abstract).

Kim Katzberg (as Losstt-Keyes) is a genius of physical comedy as psychological pantomime, and as Quan, Tom X. Chao (Katzberg’s co-writer) matches her with immobility here; their dance of neediness and repression would be…um, a dance, if the play weren’t instead about the contortions of people not sure how to approach others or only partially able to convince themselves they shouldn’t. Between the paroxysms and zone-outs some real pain of abuse and prejudice is mutually revealed; willful unreality and evasive detours alternate with the emergence of these secrets and of the characters’ sexual preoccupations and domestic dreams (both of them seem to think they can bend the world with words, Quan with excessively deliberate diction and Losstt-Keyes with ornately-off intonations; at one point she decides on a pet name for “Dennis” which sounds a lot like “deny”). A work in progress with much more still to find the ways to say, Hot for Feminist Theory Professor (excerpts) is divine comedy with an eye sharp for the absurdity of our assumptions, and just as understanding of what those jokes are there to keep from view. 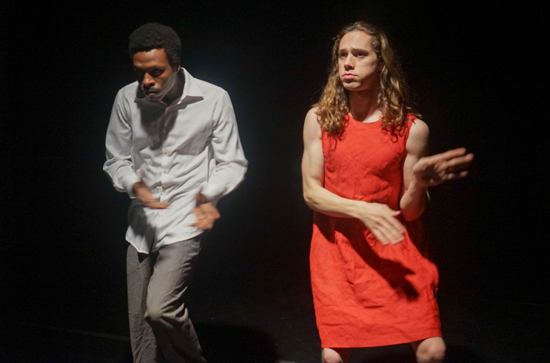 In this era of public transit as arena of intimate atrocity, and speech both more free and more hateful than ever, Amiri Baraka’s Dutchman, the 1964 parable of an anonymous Black metropolitan professional driven to murderous rage and subject to random extermination on the subway, arguable needs no updating. So in [Flying] Dutchman: A Rite, the Theatre of War company unmoors it from time and place even further. The play’s text is interspersed with some fragments of Jean Genet’s The Blacks, a roughly contemporaneous play but one which slid along a continuum of historical have and have-not to begin with. We’re also no longer on a subway car, but right where we are, in a three-walled theatre. The main character, Clay’s, militant manifesto is not so much a contemporary call to arms as the founding declaration of today’s insistent citizenship; White people know full well what is on African Americans’ minds, but the transposing of the play to the theater itself, with Clay berating the audience, razes the barriers that anyone can turn inward from. Baraka didn’t expect or mean for all those barriers to be crossed; the manic-pixie-fatale character of Lula, the White woman whom Clay engages with in a dance of desire, fear and resentment, has always been problematic (if relieved a bit by the sense that she is in fact a creation of Clay’s wary mind, and that Baraka himself has created her to ritually do away with the boundaried self that “LeRoi Jones” was about to leave behind).

Here, the border is both crossed and blurred by having Lula played by a biological male, and the company bravely opens a new front of unresolved social friction by at one point having Clay derisively address Lula not as “Tallulah Bankhead” but “Caitlyn Jenner”; Baraka is not around to contribute thoughts on the Trans revolution, and in the void this one update introduces another divide-and-conquer competition between the dispossessed (to go with the play’s pre-existing ones among men and women, and Blacks and Jews). Baraka’s original wavered elegantly on the wall between classical drama and the abstract avant-garde, and this company pushes it over, into fantasy interludes of Clay and Lula in a kind of puppet-guignol/“Apache Dance” of camaraderie and hostility, an undercurrent of passions that then overflows into real life, and death. In Baraka’s version, only one of the protagonists walks out; in this one, those who leave are not even themselves (but you should see what I mean on your own). As Clay, Malcolm B. Hines draws on a broad and fluid emotional palette along the spectrum from affable assimilation to righteous fury; Jonathan Schenk concentrates fearless deadpan mania and insinuating menace as Lula; and Christopher-Rashee Stevenson’s cerebral, flammable direction and superbly astute and agile sound design guide the production well. Circling one spot, [Flying] Dutchman maps the distance we still have left to cross. 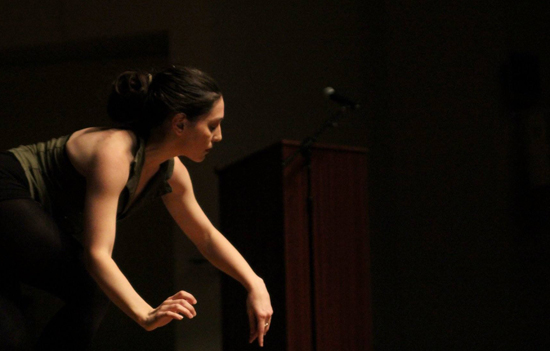 The body is a battleground, as the ’90s saying went, and in In the Pines choreographer/dancer Patrice Miller attempts to find peace. In this tableau, all words and companionship have dropped out, or at least, all except the imposed, unanswerable stream of folk and pop songs, in either the murder-ballad or subordinate-girlfriend mode, which surrounds Miller. The unidentified figure she portrays does not get to tell us her story, but we can witness, and follow her steps. Her first move is to stay still, while the music plays insistently but unheeded. This can’t hold, and soon the dancer is set in motion, and we see what course she can forge. Like some other dancers capable of outsize physical feats, Miller excels at considered containment; strain and struggle speak life-stories. She almost goes up a wall, contorts and retreats, and at other times whirls in phantom ballroom abandon. Some of this is done in a dystopian yoke, with an invisible master at the far end; some in a skeletal hoop-skirt, symmetry tangled and ruined, whose shredded fabric recalls an unformed escape-rope, its ribs a portable cage, its circles, as Miller sinks to the ground, the ripples of a plunge into Ophelia’s brook. Miller at times moves like a marionette feeling its first mobility; later on, even her fingers dance, a climb rippling through her whole form from the ground upward. This figure is a puppet at the limit of her last string, and with a certain resolved power at the dance’s end, the thread she holds onto is a lifeline with connections in the hearts of half the world or more.

The This Is Not Normal Festival endures through July 8, 2017; details here