There are many ways to punish yourself. What’s more elusive is how to forgive yourself — especially without forgetting what you did. The new meta-memoir “cocaine comedy” Kyle by Hollis James finds novel ways to do all of that.

Freelance children’s book writer Jack is living a standard, comfortable struggle in New York when his already-obsessive personality is supplemented by discovering coke, which his more grown-up girlfriend Crystal can handle and keep occasional but he quickly can not (an early signal of this play’s honesty and focus on good judgment rather than judging). Jack also gets secretive about it right away, in due course jeopardizing relationship, career, survival and social skill.

He’s not the only one with him in his head, though; Jack’s personified addiction and reckless impulses, “Kyle,” is visible to him and us, like a nightmare Harvey the Giant Rabbit. 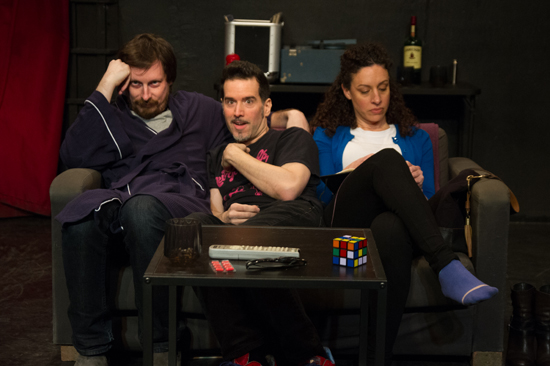 It’s telling that this living cartoon-character, this all-too-recognizable bundle of amped-up pure animus, is the one James himself chooses to play, not the real-life addict. It’s self-critique without a net, and James’ precision mania in this role is surely one of the most compelling and hilarious performances I’ll see all year.

Playing Jack, Nat Cassidy is given the heavy lift of a lightweight character. As Harvey Danger (no relation to the rabbit) once sagely advised us, “a tragedy requires a little greatness to begin with,” and Jack gives us little reason to mourn his best self before his fall begins. This of course serves as a smart B-side to the resolute absence of sympathy seen in the way Kyle is portrayed; the excuses we see both halves of Jack’s psyche make for himself are elaborate and absurd (and, to anyone who’s dealt with an addict or been one, note-perfect), but the playwright himself is making none.

If you’re looking for gravitas from Jack, welcome to the club, but be careful what you ask for; Cassidy does a good job as a personality who projects superficial goodwill to avoid looking inward, and the depth Cassidy is capable of breaks through at Jack’s moments of worry or fright, and especially as he’s monologuing to a therapist; the point at which he’s most by himself is the one time his life is not an act, with no one to perform for, or hide from. 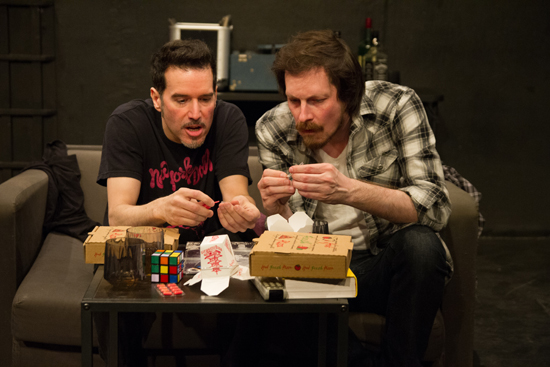 In the overfilled canon of addiction narrative, Jack would have been the tortured, misunderstood creative spirit, but here he’s just a dude; Kyle would have been the romantic, doomed rebel not made for these times, but here his dilapidated, desperate state is what’s most noticeable. The avoidance of cliché, either glamorizing or moralizing, takes as much strength as kicking a substance, and is healthy for everyone who’s there, both real and fictional. 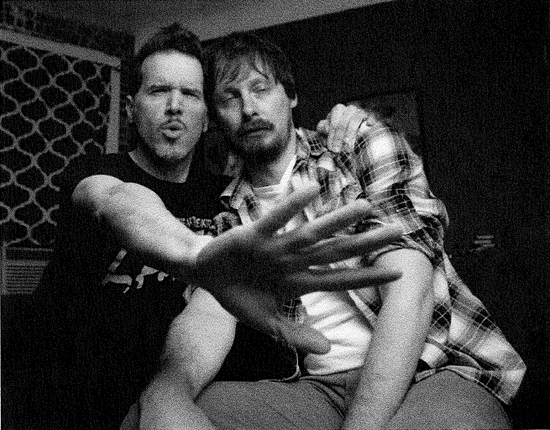 Emily Owens’ crisp and witty direction keeps the abrupt swerves and grinding samenesses of Jack’s reality sped up and drawn out expertly, and James’ script subtly suggests the wavering roles of choice and chance in how it turns out. The play could have ended on any of its last three scenes, in triumph, defeat, and some battling balance in-between, and these feel like alternatives that are equally possible. Each one rings true and each remains open-ended in its way. For the rest of their life both Jack and James will have to keep listening for good counsel, and as long as they have one more day, it’s best that the jury stay out.