THIS: Let Them Eat Take-Out

We’re facing times when more and more of us will be worrying where our next meal is coming from — and Lunchtime is about the added anxiety of who might get there first. 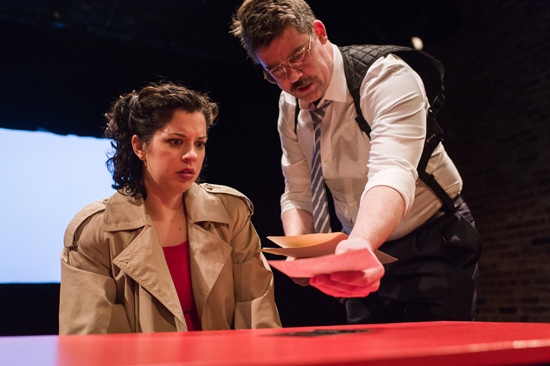 In this new play, the Platonic order of New York’s salad bars is getting disrupted, and finding the vandal will take the kind of detective who thinks outside the trough. It’s not exactly as if anyone’s ending up face-down in their pasta-salad, more like some fiend getting his strawberries in your sushi, but nonetheless the Ben Katchor-esque crisis of the “Deli Wars” is primed to send routine-fixated New Yorkers into a complete civic breakdown, and gets incidentally cross-contaminated with the lives of an Agatha Christie locked-lunchroom of office serfs, waiters and police.

Company potentate Charlie McDaniels is imposing himself on new-hire drone Louise while trying to discard his previous side-project, middle-manager Nina, whose counter-proposal is to kill him; Charlie and Louise’s separate lunchbreaks might implicate them in the quest to clean up this town being pursued by detective Stuart Forbes and wannabe cop / investigative waiter Nicky. 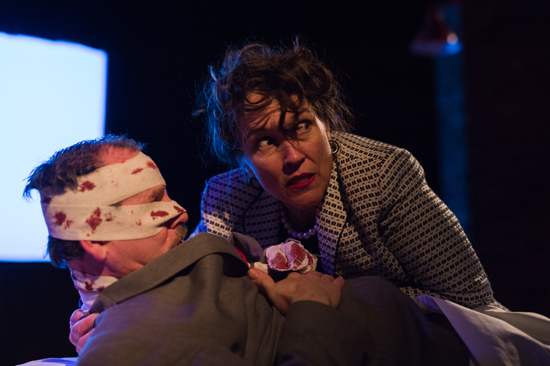 This cast tends to talk past each other in self-important absurdist run-ons about humans’ still-primal appetites, expressed in masticated metaphors of food. None of the others are ever paying much attention, which grounds the recurring gag of characters startling at the voice of someone who’s already been in the room.

Playwright/director Greg Kotis’ ear for blather is epicurean, and the words are madly relished by Bob Laine in a tour de force of buffoonish hubris as the boss; Micah Sherman making an artform of tight-lipped, head-injured certainty as the cop; Amy Berryman and Milo Kotis as Louise and Nicky, serving lyrical chagrin and bravura insecurity, respectively; and especially Ayun Halliday, as Nina, in a masterwork of Medea/B-movie femme fatale dudgeon and self-satire.

The playwright (a past Tony-winner for Urinetown, it should surprise no one) told me that Lunchtime had been developing for at least 10 years. That’s enough time for it to have been left out and spoiled by the Trump-era tendencies of insuppressible hysteria over trivial troubles, and authoritative-sounding yet entirely improvised orations on only remotely understood subjects. Hearing it this way helps the real-life version go down much easier, which we’ll have to make do with, since, in society as at a salad bar, we’ve served ourselves something that can’t be sent back.

Lunchtime’s first run continues through March 18, 2017 in Brooklyn, USA at The Brick.