THIS: The Gathering Brainstorm 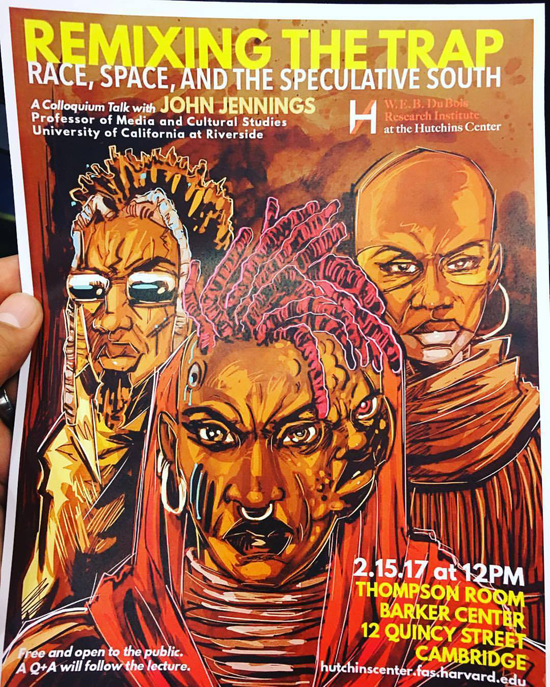 Last week we left off with artist and Afrofuturist scholar John Jennings on an exodus from the 1800s to 1976 to 2017, in which year he and his collaborators had just published the graphic-novel incarnation of Octavia E. Butler’s classic work of time-travel and mental decolonization Kindred, written in 1979 and following the traumatic, fated transit of a contemporary Black woman between the relatively evolved world of mid-1970s America and the slavery-era Deep South. Jennings’ forward voyage was already continuing into a near but almost unrecognizable future, with an innovative mix of sci-f and hip-hop tropes to combust a whole new reaction to social and survival issues we recognize all too well. Like the proper parallel-time traveler, Jennings was working on the concept art for this new story-cycle while we conversed about Kindred, and had so much to say about it that it deserved its own column, since it is its own world. Flooding across genre boundaries, and, in a signal of how pop expression and academic inquiry have closed a distance, being developed as part of Jennings’ current fellowship at Harvard, the cycle splices the forward visions of digital fantasy with the immediacy of recent Southern hip-hop and drug culture, and the entrenchment of not-so-natural disasters and civic neglect. Jennings’ speculations spun out from a reference to his “Ethno-Gothic” concept of folkloric, culturally-specific supernatural fiction, which is where we pick up the future in progress… 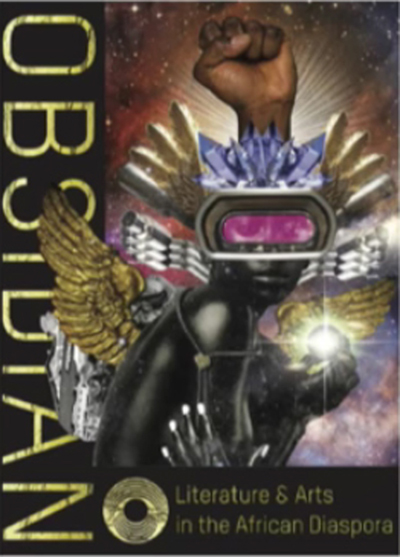 JENNINGS: I did a visual essay about the idea of the Ethno-Gothic, in a new special issue of the journal Obsidian on Black Futures and Black Speculative Culture. The “Cybertrap” world that I’m working on now for my Harvard piece, my friend and I, Regina Bradley, we have our first Cybertrap story in that [journal]. This really crazy mashup of Trap culture from the early 2000s mixed with cyberpunk. That’s literally what I’m working on right now. [laughs] I’m doing these different renditions of this character from the story, this world. I’m very fortunate that they let me do some craziness like this. [laughs] “Okay, that sounds great, you should come and do that.” “Did you just hear what I said?!”

It’s set in a future, dystopic South, in Jackson, Mississippi; Jackson is already a dystopia so it’s not that far. It’s based in the year 2028, after two massive hurricanes come through and totally decimate the Southeast. Florida, for instance, is almost totally submerged by this massive hurricane called Hurricane Freedah, which is a “Category X” hurricane, it’s the biggest in history, it doesn’t have a category. This is actually after, it basically ends this conflict, a water-war, a civil war over water, called the Asipana Wars. It’s the East vs. the West because of huge resource depletion from population growth and climate change. There’s also this really crazy drug, a cyber-drug, that affects [both] human beings and computers. Of course, [this is] cyberpunk, so a lot of people already have implants and all kinds of doodads anyway. This drug, it morphs, it senses what the body needs, and becomes [whatever compound] the user requires. And it’s addictive. So the main character I’m drawing right now, he’s a hacker who cuts up the code, it’s a computer code that’s downloaded to these nanobots. 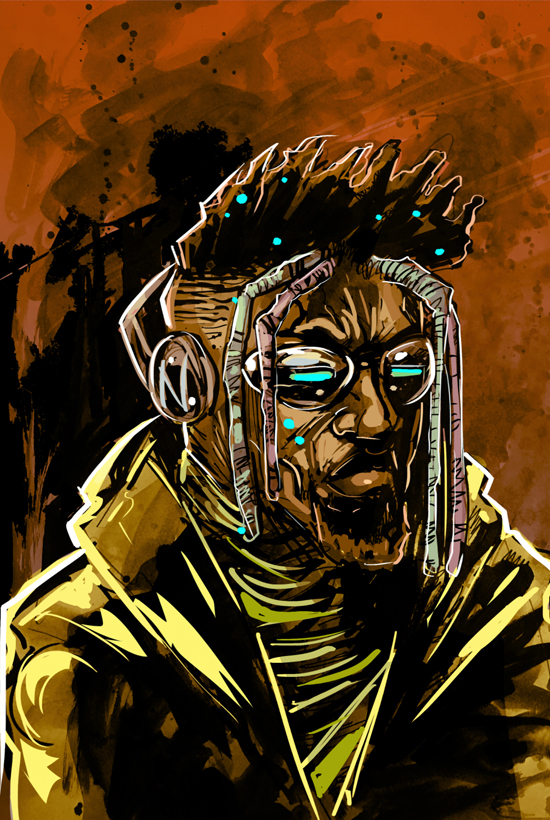 So [the story is] cyberpunk, but it also has this really crazy aspect around the drug culture that is part of the narrative that you find in Trap culture. It’s basically talking about a lot of issues that are happening in the South right now, around resource depletion, and discrimination in sources of funding. So what happens is, this drug becomes legalized, and then Mississippi gets this massive power from the tax revenue that comes in from legalizing this drug. So the whole thing is about the politics of a space that’s like that. How does that affect a space like Jackson, Mississippi, that has for so long been impoverished, but when you start over after a massive apocalypse, how does that change the narrative around how resources are allotted — there’s also this crazy tourist thing that happens… it’s nuts. [laughs]

One of my favorite things, though, is there’s a meta-story, so there’s this company that pops up in the Trap — because you can’t get out of the Trap, that’s why they call it the Trap; you’re stuck there; either you run the Trap, or you die there — or you have to figure out how to escape in other ways. And or course a lot of that is [through] drugs, but also entertainment. And there’s this massive company, called Trinity, that’s like if Monsanto and Nestle and Viacom merged [laughs]. Definitely a lot of the tropes of traditional cyberpunk; paranoia about what happens when the human body merges with technology… a trippy story.

So, the overarching narrative is kinda like in Sin City, [with distinct arcs], so our [first one] is “Cell Therapy,” which is from the Goodie Mob song; they were one of the original Trap rap acts. A lot of this started because Henry Jenkins invited me and Stacey [Robinson] out to talk about [the mytho-pop project] Black Kirby as a continuation of some of the legacies of cyberpunk. [I thought,] what would a Black cyberpunk actually look like? That’s what it started with. I pitched it to my friend Regina Bradley; she’s a Trap scholar, she studies the culture, and we started working on this story space together. She also writes speculative fiction, and teaches English and African-American studies. So [the Cybertrap story] is [both] authentic and imaginative. I’m thinking about the rendering style that I’m going to use for this work. I’m still between this kind of painterly, dirty-looking thing — because, y’know, the Trap is all grimy, just like cyberpunk is like, hellish techno-scape. 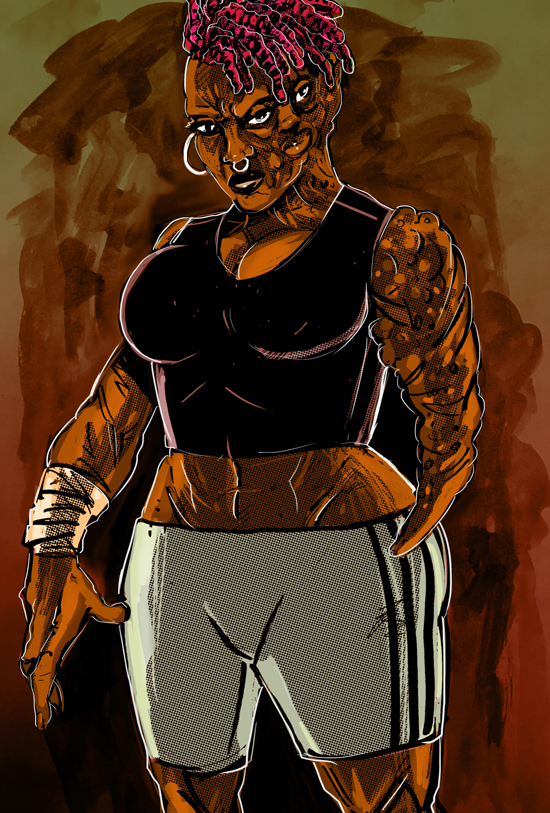 JENNINGS: Exactly; in fact there’s a whole business that comes up around scavenging the past. But the biggest thing is this drug, because it could be pharmaceutical, or could be… a really good cutter can actually reinterpret the code to be very useful in medicine. But the thing is, the code is indigenous to the city; for some reason, the code breaks down if it leaves the Trap. ’Cuz even the code is trapped! There’s this sense of it being alive, and the Trap being like a character — and maybe the code is the language of the city. Zoe Smith, a burgeoning comics scholar, has been assigned as my research assistant, so she’s doing research on climate change, and nanotechnology, to make sure that this feels right.

The first two stories are already coming out; one is in Obsidian and the other one is in a collection Regina is putting out of her short fiction. It’s early stuff where we’re still conceptualizing, “okay, what is this space actually gonna be, and how is it gonna work as a diegetic prototype to look at issues that are happening in the South and the world.” So I’m thinking of it as a transmedia storytelling space, that actually can be — definitely comics, but also, I’m thinking about RPG too; why not do a role-playing game set in this space. It could easily translate into different types of stories, but we’re just trying to set up the rules of the space.

There’s very few narratives in science fiction that are set in the South, that are futuristic. Of course you have something like Walking Dead that qualifies as science fiction, it’s post-apocalyptic, the apocalypse comes from science — but it’s more like horror. Most Southern narratives within speculative fiction tend to be Southern Gothic horror; you don’t see a lot of futuristic narratives happening in the South, and I think that’s very interesting as a convention of the genre. They’re few and far between, and I think that’s really telling, about how we look at the South.

HILOBROW: Locked into this stereotype of backwardness and rustic living.

JENNINGS: Exactly, whereas the Trap is extremely urban, it’s the hood, it’s the built environment; there’s this country nature to it too, but it’s rife with the types of issues that happen in inner-city spaces. So in Jackson, for instance, it totally feels like Detroit right now. Very de-industrialized, there’s a lot of urban blight. There’s a sense of days gone by; bombed-out buildings, old industrial spaces that are left uncared-for — so it definitely has the trappings of an urban space. It has seen better days. 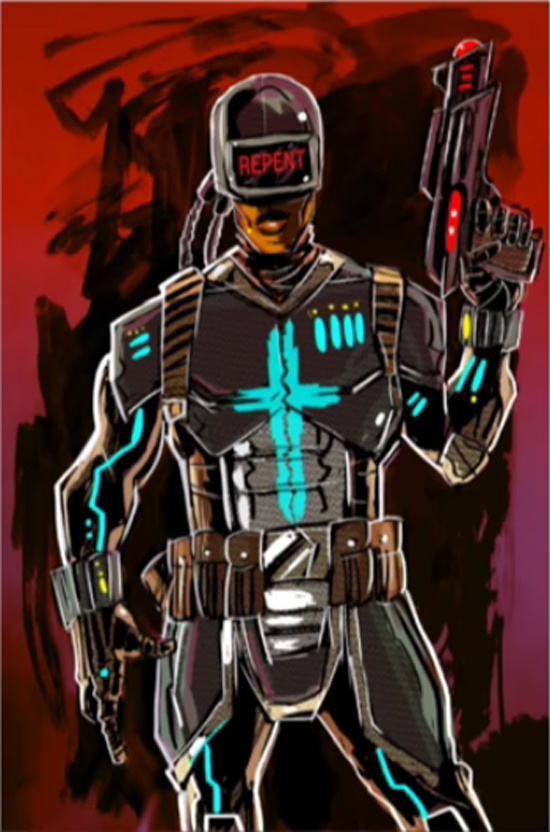 HILOBROW: The South in general, Black American culture in particular, has been burdened with that since time — an incompatibility between Whites’ rustic stereotype and technological advancement. When the realities can even exist side-by-side and symbiotically; I mean, who’s more techno than Lee “Scratch” Perry, and he comes from a tropical island.

JENNINGS: That’s why I co-created [the Jackson State University colloquium] Planet Deep South. Because, a lot of the primary thinkers of Afrofuturism are Southern. So you have these notions of aspiration and advancement on multiple levels, coming from Black, Southern folk, who are really thinking outside the box, about what the next steps are gonna be, for our country even. That’s amazing. But yeah, people generally still think of the South as a haunted, backward space. So [we asked], what if something happened that totally turns that around, and makes a space like Jackson a booming space? But then you mix it up with Trap culture, which is just the most irreverent, gutter, violent, misogynist, hyper-capitalist thing that you can imagine. But then still have some of the classic sensibilities of cyberpunk. That’s… crazy!

[It begins to make more and more sense with Jennings’ February 15 lecture on the concept and its source code, YouTubed in full here.]