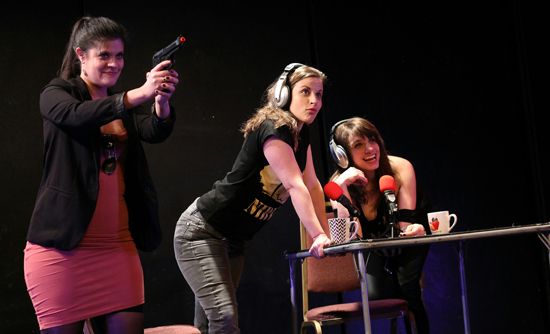 “This came together after the election,” said host Ashley Jacobson referring to the emergency program of creative responses to Trump’s victory that was about to start. “We were originally gonna do an improv show about Britney Spears.” This got a laugh, but as an outspoken fan of totalitarian presidents, Brit was here in spirit, as four short plays and four solo performers took an early shot at processing democracy’s midseason hiatus.

Jacobson is Artistic Director of feminist theatre company The Dirty Blondes, who put together The Resister Project, compiling nine plays and seven soloists in all. (It continues for a week after this posts, through January 15; details here.)

The program I saw was bookended by the two plays that I felt worked best that night. Nasty Bitch Radio by Cat Crowley is a horrifically hilarious inversion of the talk-radio hellscape, in which one remaining female-fronted (though still male-run) station’s hosts Stepfordly mouth internalized debasements of the once-fringe Limbaugh/Trump element (one introducing herself dulcetly as “a sad, horse-faced spinster”), while planning to seize the airwaves and rally the 51 percent. The gulag-like assignment to trivial “ladies’” content and unseen media is the price of scoring low on the now-compulsory 1-to-10 rating scale for women, and the way the DJs are able to plot in plain sight (or earshot) is too clever for me to spoil here, as is what happens when a conflicted female FBI agent shows up. But the inspired result plays like a dystopian update of Agent Carter and a comedic prequel to Kelly Sue DeConnick & Valentine De Landro’s Bitch Planet, with co-anchors Lex Friedman a furnace of contained sarcasm and rebel intensity and Jeanette Bonner virtuosically losing her shit and finding her voice. 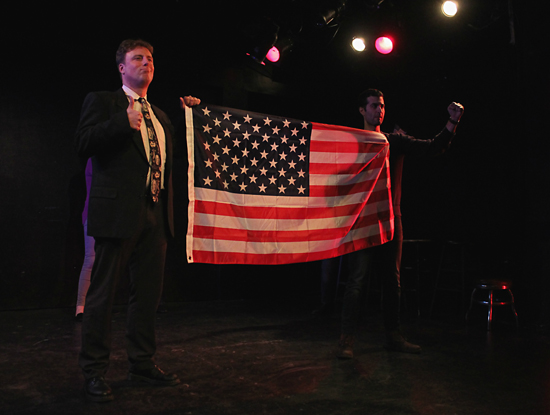 Absurdity is one of the most useful ways of scrambling Trump’s shifting baseline for reality back toward some kind of sense, and Me Monster by Maggie Bofill takes the tropes of dada-ish theatre into a current era that it has tenacious competition from. Olivia Baseman and Camara McLaughlin play a good panicked existential duet as a typical citizen and her detached soul; Roy Koshy and Jessie Winograd are well-wrought vulgarians acting like tourists in the country they finally recognize as the one in their dreams; and Fred Backus is an Olympian caricature of Trump, both cartoonish and bearishly imposing (“I’m back to playing Jesus H. Whiteguy roles,” he told me, referring to a diverse career’s also prodigious portfolio of toxic maleness). Expressed in soundbites torn off in mid-thought, and subliminal flashes of hangman’s humor (“turn left at the Mexican Wall and then go alt-right”), this play, like Nasty Bitch Radio, is good jester-ammunition for the coming kingdom.

Right in the middle of the program, befitting his Missouri homebase, comedian and gender-awareness speaker Hayden Kristal sought a centered understanding and sold it with unsparing compassion and zero reverence. Bringing the insight of a blue-state consciousness amid deep-red communities, Kristal, noting his nature as deaf, trans and Jewish, characterized himself as “the Seabiscuit of minority scholarships,” and gave much-needed reminders that self-examination is not a test any of us gets to skip. At forums like this, “it’s important to look at who you’re calling in and who you’re calling out,” he said (a thought that flashed me back to every fellow lefty who looks at me with surprise when I mention that Iowa had legal gay marriage before New York); in the brief discussion later (The Dirty Blondes never send you home without a chance to speak), even the usefulness of caricature by both “sides” was pointed out, as Kristal said “if I see that’s how you see me, then that opens a door.”

In-between there were some works that seemed more in-progress. In Abbie Jones & That Jorge Kid by Nelson Diaz-Marcano and Incurable by Peyton Berry, respectively about near-future extrajudicial incarceration of Latino Americans and heightened unrest between communities of color and militarized cops, the dramatic authenticity sometimes gets outpaced by the speeches given to the characters to convey, but even these plays are about weighing viewpoints rather than delivering doctrine; like the rest of the selections, they are, after all, rough drafts of the future.

Our pending emperor is infamous for not doing much to prepare; The Resister Project is a good first enactment, by and for the people, of taking the lead.

Photos (top to bottom): Amanda Marikar, Jeanette Bonner and Lex Friedman (l-r) in Nasty Bitch Radio; Fred Backus and Michael Leon (l-r) in Me Monster; both photos by Stephen Anthony Elkins; logo designed by Ashley Jacobson, based on a photo by Ben Bauer