THIS: Own Your Oreos

Good things come in multiples. When I was a kid in Seattle (I was a kid in a lot of places, but this is when I was a kid there), the stores had a Pop-Tarts knockoff that came in packaging keyed to one modernist animal-emblem, and monochromatic color-scheme (wine purples, cinnamon browns) per flavor — and of these there were only a few. The scarcity yet variety drew me more to them than to their mainstream model — the serial, color-coded product-identities a kind of retail counterpart to the minimalist boxes of steel and enamel then dominating gallery walls, though the latter only were known to me as an art student years after.

It set a pattern. The chromatic swatch of sodas in improbable neon rainbows, flavors that would not last long or that we only ever found in test-marketing towns we were passing through during our many travels, caught my gluttonous eye. “Tahitian Treat” (nuclear magenta, recently revived), “Purple Passion” (you-guessed-it, and never seen again), once only-regional flavors of Welch’s, when Welch’s started making soda. Something in me still fizzes as every generic supermarket brand introduces a pineapple or a mango flavor, in fluorescent food-hues.

Oreos, in this regard, are the great love of my maturity. I don’t think they even had “Golden” ones when I was a kid, though in the midst of a standard pack of the definitive flavor I would love getting the rare single cookie with a sandwich-half that the assembly-robots had put on backwards, face-down into the cream so you saw just a blank surface, not the molded, coin-like topography of the proper chocolate crisp. It was like catching a fascinating gastronomic typo; a sign, in the insurgent 1960s and ’70s, that all was not as right as the overlords tried to assure you. 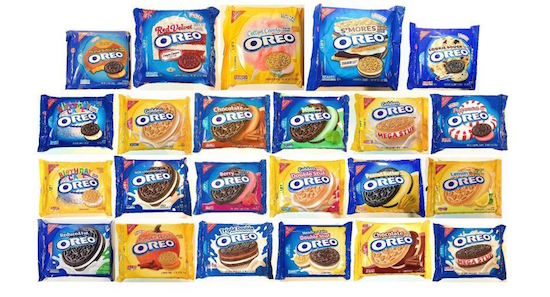 Though a classic nosh, Oreos were never unusual enough for my congenitally contrarian tastes — there was so much more to explore, say, discerning the differences (spoiler: none) between sugar-wafers in bismuth-pink strawberry, manila vanilla, off-brown hazelnut, etc. And then I had to come to Oreos even later, as my commitment to veganism at age 20 ruled them out for years. But we were destined to be together.

While serving as sole caregiver to my parents in the mid-aughts, driving three hours a day to where they lived and often skipping meals for several of those days on end, I took another look at Oreos, whose ingredients-list had magically turned vegan (enough chemicals to keep a dead horse from decomposing, but vegan). Many times, my sole sustenance would be an entire box of Golden Oreos, open on the passenger seat of my car and gradually (spoiler: not so gradually) consumed as I commuted between towns, and stores, and pharmacies. I did usually insist at least on the Golden kind; their partial reverse-image of the traditional Oreo appealed to my childhood rebellious streak (still intact), and affinity for things that looked like a mistake of the marketing machine.

Destiny confirmed my course when, at a birthday party for a colleague in the comicbook field, I met a mutual friend who revealed himself to be the branding-specialist who had “taken the lard out of Oreos.” I owe this man my quality of life, or at least my levels of cholesterol. And even better was to come: the universe of limited-edition Oreo flavors. 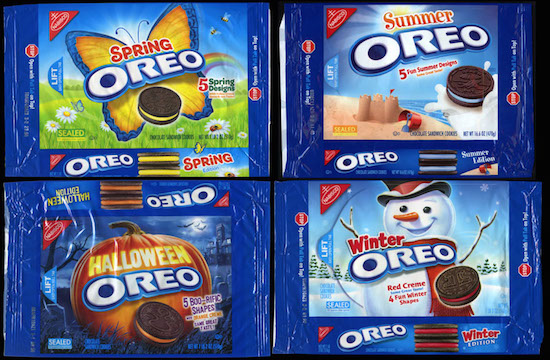 I say “universe” advisedly; these versions appear and vanish on supermarket shelves with the miraculousness and mystery of the cosmos itself; a multicolored mandala of sugar and grease created by hunger and wiped out by our appetite for existence. Some become fixtures of reality, on sale all year — the “Birthday Cake” ones, the lemon-center ones, the mint, the peanut-butter (but not the limited-edition “Reese’s” version, whose “creme” is split down the middle, chocolate and peanut). Others well up like Brigadoon and have to be consumed while there’s a chance — the Cinnamon Bun, Red Velvet, S’mores versions; the Filled Cupcake (with bullseye-creme that has a white center surrounded by chocolate, and whose label instructs you to “Twist & Lick!”). Some variants transgress the traditional tenets of what an Oreo can be more than others — the S’mores and Key Lime Pie versions have cremes of those flavors between two graham-cracker cookies.

There’s a collector’s frenzy to this, though it’s a hoarding of experience, not artifacts, since few of these flavors will last forever (though they resurface at random in some stores’ inventory, buried treasure of the type everything used to be when consumers had to comb brick-and-mortar shops across a whole city for a given toy or comicbook or brand of gravy). For a geek glutton, it’s like a sublimated reboot of some ’70s picaresque of promiscuity, the quest for the Big Oreo; the variety also conjures the kind of unity-in-diversity that product-families like Franken Berry, Count Chocula, and Boo Berry always signified to me. 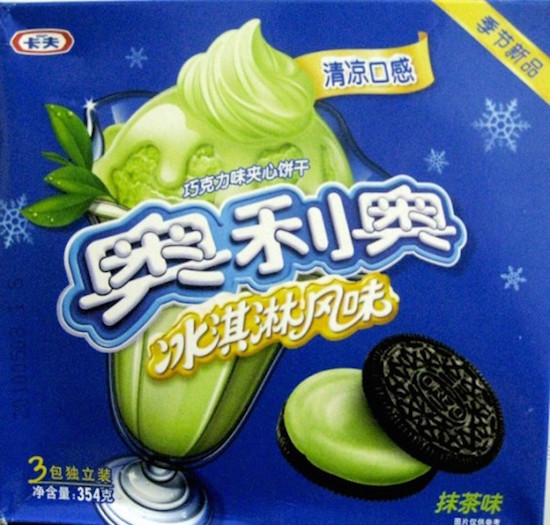 I’ve eaten the Candy Cane Oreo, and the Brownie Batter; I long for the lost Dulce de Leche; I aspired to finally find and try the Candy Corn flavor this Halloween season, and may have to buy a plane-ticket to experience the Green Tea ones in Asia. Root Beer Float, Marshmallow Crispy, Toasted Coconut, I’ve had ’em all. Never tried the apparently-permanent Berry one, though — seems like a juice-flavor wrongfully misplaced into a dessert solid, and this all has to stop somewhere. I’ve tasted the same-flavored, seasonally colored centers of Winter and Spring Oreos, but I’m not a pervert.

Still, the variety of Oreos that is there for the taking is the closest we may come to the three-course-meal in a stick of gum that Willy Wonka made us dream of, the pot-roast pill future-food we were promised. It’s a whole pie, or campfire delicacy, or pastry selection, in a cookie! Oreos have seen me through some trying, lonely times. I don’t know if it’s been as good for you. But I know they’re good for me.