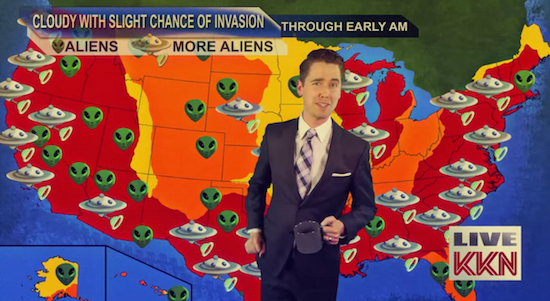 In the only universe we’ve really got, the heroes of our own stories win by sharing power and staying real. Singer-songwriter Kyle Stevens has been on such a Mortal’s Journey since 2009, when his band Kirby Krackle started pioneering “nerd rock” about the inner lives of the comics-addicted and socially marginal, and it’s most recently led to Mutate, Baby!. The band’s fifth studio album continues the metamorphosis from two to three dimensions (on the way to, y’know, at least eleven), and I don’t just mean superhero drawings becoming live-action blockbusters.

Starting on their self-titled debut and its successor E for Everyone with clever satires and surprisingly perceptive psychological portraits of very recognizable (and usually named) characters from comics, videogames and horror movies, by the third and fourth disks Super Powered Love and Sounds Like You the geeks were starting to take over the narrative just like their influence has washed over the culture, with sagas of spending way too much on scale-model spaceships, wooing the rare female in the local comic-shop and actually relishing math. The band never left childish things behind, still balancing these antisocial-science stories with odes to games and superheroes that mainlined the metaphorical core of these pastimes in an incomparably moving way (“Vault 101” as a mantra against existential despair; “Needing a Miracle” not mentioning Lois & Clark by name but not having to be specific about how love saves us just in time). Sounds Like You was the first one that tipped the balance almost entirely from such pop-vérité theme-songs to affectionate field-reports from a real-world gone geeky — endearing, ear-worming odes to cosplaying couples and online romantics and life-long TV binges and personal sheroes and cultural crossover, in an arrived future of intimate technology and fluid identities. 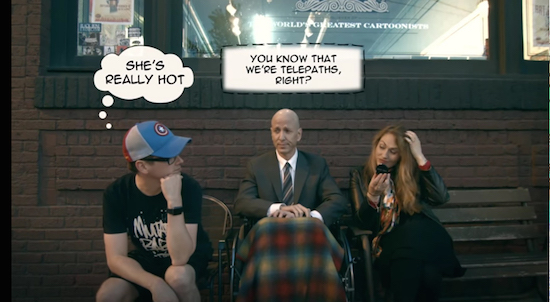 Stevens’ stylistic palette has always been much more than four-color, from folk-ballad to ukulele-serenade to freak hip-hop, nerd-funk, trudging metal, amphetamine punk, simulated salsa and state-of-the-eternal indie rock. Mutate, Baby! is bookended by the fritzing-transistor and sped-up-metronome ’80s technopop textures that have been surfacing so inspirationally this decade for New Pornographers, Stairs to Korea, et al., with detours into mock-gospel, march, atmospheric powerpop and classic strains of mass-audience song-form for the ten tracks in-between.

What was newly ascendant fringe-lifestyle on the last album is a fully absorbed frame of reference now, so catchphrases are often all Stevens needs to frame slices of entirely real life, as in the wise, clever anthem to living in this moment and however many more are left, “No Spoilers, Please.” Elsewhere, the idols of fantasy are returned to their rightful place as trinkets on the shelf, though not all their acolytes may notice, as in “Dancing Baby Groot,” whose Carpenters melody backs a love-song to living kitsch from an enthusiast who seems to be channeling the eerily amorous jingles from 1970s doll and ride-on toy commercials. This love gets even madder with “Frank the Pocket,” a song of praise to a stitched-felt tchotchke with a loony barbershop-quartet/Dixieland/Rockabilly score straight outta vintage Van Halen. With a Bond-villain aiming for the highest office in the land, there’s nothing far-fetched at all about “We Had a Good Run,” which flips the script on alien-abduction pop by flagging the invaders down to please take over (“We had a good run/but now it’s done/It seems all the stupid people won/and all those who couldn’t get along/now lose anyway”); the genuinely menacing “The Yellow King” could be about True Detective, or Victorian weirdness-lit, or, you-know-who-I’m-talking-about.

Songs like these seem more about clouds of anxiety seeking a shape than any particular genre referent, and “I Was Made to Haunt You,” about a boyfriend who stalks from the grave, also uses fantasy as a mere starting point from which to depart into reality. Nothing needs to be specific (as X-Men-ish as it sounds) even about the superhuman phenomena in “The Day My Powers Arrived,” which is one of Stevens’ patented paeans of coming into your true self; and you don’t have to know your videogames to respond to “Your Titan Is Ready” not as the tale of a friendly sentient exoskeleton, but a more archetypal spirit of protection that all who love someone can relate to the essence of; through the medium of Kirby Krackle’s psychological pop, Stevens is a writer who geeks in.

The songs start to veer toward the world he and his bandmates have made real; “Reverie” and “Shooting Star” are about the boundaryless community of music (though lines like “The snare cracks and the guitars ring/It makes me fall in love with everything” remind me of the psalm to creativity when Laura becomes Persephone in The Wicked + The Divine #11). The album’s adrenalized title song is a post-punk affirmation for facing the unknown, and in “Geek Culture Is Dead” (a kind of counter-nostalgic reverse of the Ramones’ “Do You Remember Rock N’ Roll Radio” for the Big Bang era) Stevens sings “Some would say that Hollywood it came to be the badguy/But in truth they turned our culture from a caterpillar to a butterfly” — Kirby Krackle’s music pulls along a lot of pop history in its wake, but proves that the only time-travel worth going on is the forward voyage we can take on our own feet.