America is a dream that many of us have tried to awaken from. The terrors that “settlers” and those with ill-gained privileges have always imagined were just beyond the next frontier or around the nearest streetcorner exert such a palpable influence on those in power, and so deadly an outcome for those in their path, that the constructs of both American fear and fancy might as well be material. 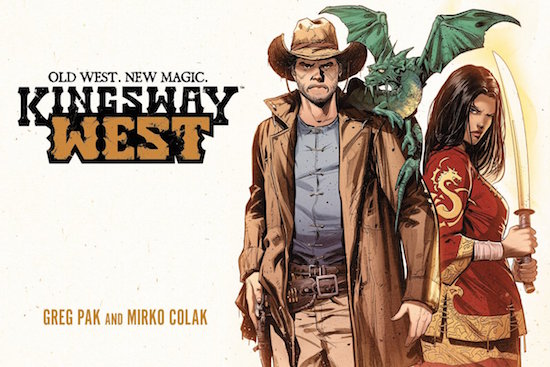 That’s one of the many subtexts at work in Greg Pak’s new comic Kingsway West (with artist Mirko Colak), possibly the most fascinating new series to debut yet this year. Alternate manifest destinies have inspired several extraordinary comics in the 2010s, including the first arc of Kelly Sue DeConnick & Emma Ríos’ surreal feminist frontier passion-play Pretty Deadly (in which the founding sins of American expansionism literally rise up to haunt and hunt its victors soon after), and Jonathan Hickman & Nick Dragotta’s East of West (in which seven nations, splintered from the obsolete USA after the Civil War, contend for supremacy more than two centuries later, as the embodiments of not a compact with god but a deal with demons become terrifyingly dominant).

Kingsway imagines an America that shattered even sooner, and in which cultures of color have as much influence as, in the “real” universe’s America, they have made a contribution. The 1840s discovery of a reality-altering substance, one part Gold Rush to one part Manhattan Project, and resonant with alchemical notions of natural laws (like belief in phlogiston) from the dawn of science, leads to a lengthy resource-war between an extended Mexico (the República de los Californios) and the Golden Mountain Empire (a sprawling Chinese state further up the West Coast), ending, ironically, in 1861 (the sins of America may never be redeemed, just remixed). In its aftermath, two lone gunslingers left over from each side try to rebuild a life in exile, while the lingering resentments of loss and allure of mystic power pull at their separate peace.

The landscape is true to the psychological topography of national myth, with reconnaissance dragons sent out by the Empire and unremarkable sasquatches and jackalopes at play in the mountains. The presence of both legendary monsters and tall-tale punchlines signals the remarkable balance (which tips at both endearing and terrifying points) between traumatic-aftermath pathos and life-restoring good humor that Pak’s sparkling writing strikes. The first two protagonists, Kingsway and Sonia, are pulled apart as other players (and entire nations) rush toward the title character and each other in renewed conflict. Rich in lore and Jules Verne tech and divided loyalties that run much deeper than borders, Kingsway West is a vintage dystopia that creator Pak may dream a way out of. 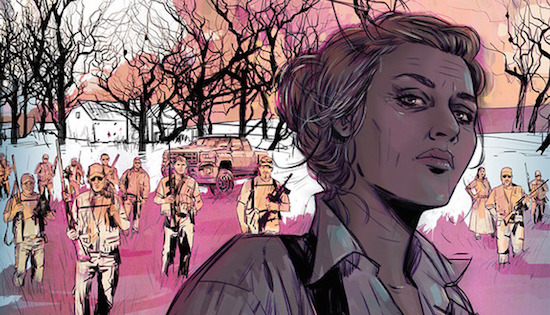 The struggle to instead get locked in is dramatized in the all-too-contemporary Briggs Land, a new series by writer Brian Wood and artist Mack Chater (which is said to soon also be a series on AMC). It’s about the American Delusion of purity and isolated self-sufficiency, at a paramilitary compound/village in the wilds of upstate New York. Somewhere between a biblical patriarchy and a mafia stronghold, Briggs Land is coming under siege with itself, as a passing of power from the secessionist cult’s jailed father-figure and his dissenting once-child-bride, now aspiring heir, starts to get un-civil. The parallel reality of regressionist, supremacist outliers is something that’s already very real to them (just ask Cliven Bundy and the Oregon occupiers), and Wood’s immersion in their thought-processes and point-of-view from within their primal conflict is master storytelling and vérité horror. 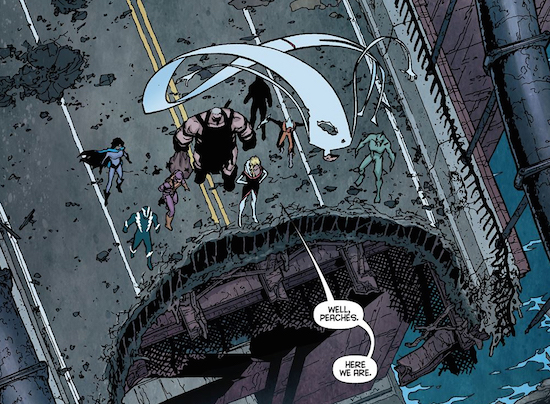 We all retreat into fantasy in one form or another; what’s cause for fear is when we can’t find our way back. The superhero saga is more and more the modern-day substitute for the allegorical conflicts found in much older belief systems; this goes without saying and gets said a lot, so many of the more intriguing superhero series pose the questions the form hasn’t asked itself. In Gail Simone & Jim Calafiore’s Surviving Megalopolis — a sequel to their Kickstarter hit Leaving Megalopolis and thus a dream-project-come-true off the page — a malign force from, it seems, another dimension (maybe everyday, unhappy-ending reality?) has turned all the title town’s heroes into psychopaths and unstoppable mass-murderers; like the previous miniseries, it’s a macabre analog to the breakdown of social safety and the betrayals by figures of authority during Katrina. In this one, several escaped survivors of the first catastrophe have returned, a harrowing symbol of confronting your fears, even if it means you meet your mortality. No one brutally channels yet compassionately perceives the pathologies of human cruelty under distorting traumas like Simone, and no one wants to think about these characters who epitomize human potential being petulant and dominating and careless and hateful, because it means that those qualities are in us to be magnified too. Surviving Megalopolis ends with its upcoming sixth issue — but does it ever? 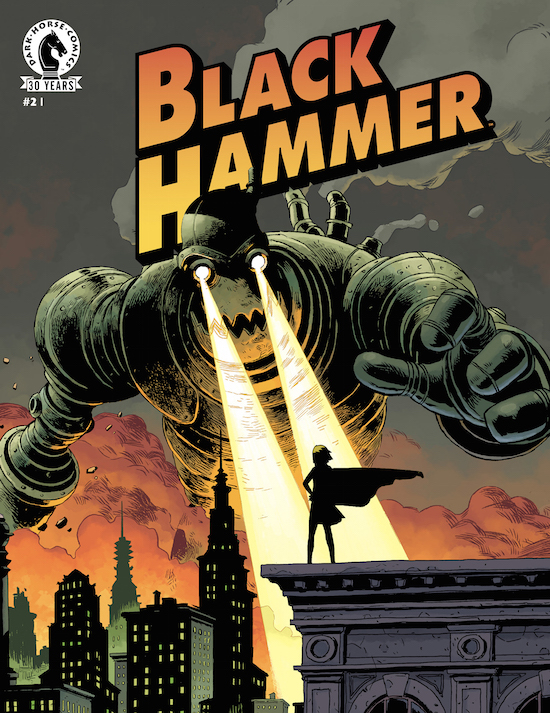 Only two issues in, Jeff Lemire & Dean Ormston’s Black Hammer is one in a burgeoning genre of post-career superhero dramas, and is already writing a new definition of it. In this story, you are, as it were, not trapped inside with the former heroes, they’re trapped inside with you. For ten years, a pantheon of Golden Age-style beings from the mythic Spiral City have been down-low as regular folks in a farming community that seems to be some kind of spacetime prison — they can no longer fly free, and the panic of return to the rural from the signified ascension of the city is an interesting American phobia to see science-fictionalized (and is an interesting counterpoint to the chosen sequester in Briggs Land, come to that). Writer Lemire imagines brilliant pastiches of the 1930s-‘60s superteam archetypes, and Ormston’s engraved, creased textures and retro-fanciful visions take the reader to another world as well; it’s like a turn-of-the-last-century pulp illustration crossed with underground comix, to match Lemire’s melancholy, unnerving mix of The Village and “It’s a Good Life.”

Fantasies have to end, though we sometimes can’t be sure if we’re sinking or emerging, and collectively these four narratives are about the tension between what you’ll never live again, and what you may open your eyes to find was not there to begin with.

The four main series detailed here can all be found through Dark Horse Comics; Pretty Deadly and East of West are based at Image Comics.