HiLobrow friend and contributor Colin Dickey is author of Cranioklepty & Afterlives of the Saints, as well as a forthcoming book on haunted houses, Ghostland. HILOBROW is pleased to present a brief series of Colin’s previously published essays regarding animals. 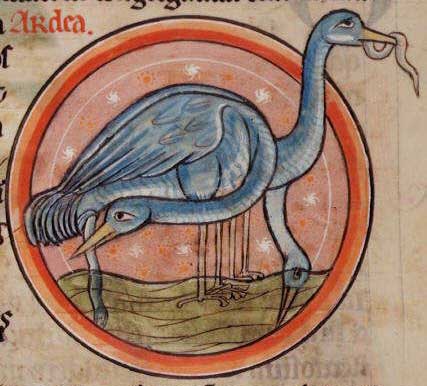 Notes on the Heron

There are times in one’s own life when a wild animal will emerge from nature and call you to it, and in the year we lived along the lagoon in Santa Cruz the heron chose me. It emerged from the stand of willows on the far side of the water, silently, its eyes on the glass of water, its legs rooted as though it had always been there, as though it had grown from the lagoon like the reeds all around it, perfect and motionless — only to explode into movement.

In the early evenings I would take the dog along the lagoon where blackberry bushes grew thick and thorn-ridden, picking the fruit as we walked. The sun gone, the last of the day’s light graying out the landscape, leaving only the green of the reeds vibrant, and there at the edge of the marsh I’d see the heron, so still in that moment, ignored by all the world and its creatures. I’d stop to watch even as the dog — oblivious — would pad on, following a web of scents unknown and unknowable to me. Occasionally the heron would lift a leg, glacially slow, bringing it forward a step, so slowly that it did not even cause a ripple when breaking the water’s surface. I’d stand on the bank and wait to see if it would strike. It rarely did.

During that fall I was researching the serial murderer Herbert Mullin, who forty years earlier had killed thirteen people in Santa Cruz and the surrounding areas. Mullin, who had responded to psychiatric treatment and medication remarkably well, became increasingly unstable in the late 1960s and early 1970s, after budget cuts to California’s mental health system drove him out of the institution where he’d been receiving treatment. He gradually became convinced that a great earthquake was imminent, and the only way to forestall it was through blood sacrifice — so in 1972 he began killing, somewhat indiscriminately, over a period of several months, escaping capture in part because of the randomness of his attacks.

As I delved further and further into his mind, his life, and the lives of those he killed, I endeavored to stay close to nature and the animals all around me. In part, because nature is remorseless about killing — not just those, like the heron, who kill for food and necessity, but also those like the raccoon, who has been known to kill for sport.

But I also wanted to remind myself that the way Mullin saw the natural world — diseased, paranoid, out of balance — was only one perspective.

With the heron my mind instantly goes to similes, and I want to describe it by what other unlike things it is like. I want to invoke a writerly lyricism, strike at you with unexpected imagery, secret resonances. But in truth, the heron is not anything but itself.

In the sixteenth century the Spanish monk Bernardino de Sahagún came to the Americas and lived among the Nahuatl, cataloging their world in what became a massive, twelve-volume work of early ethnography. Of the heron, he records: “It smells like fish, rotten fish, stinking fish. It smells of fish, rotten fish.”

The heron was by no means the only occupant of the lagoon; far more numerous were the rafts of ducks and the covers of coots, hovering about with an almost comic busyness. In the mornings, as well, were the raccoons, the washers at the edge of the water, and in addition any number of other birds and insects I could never hope to identify. All milling and swimming about, so full of seeming purpose, lost in their chores. And in such activity, it was that much harder to spot, particularly at dusk, the heron, its shape thin and close against its backdrop, waiting, watching. 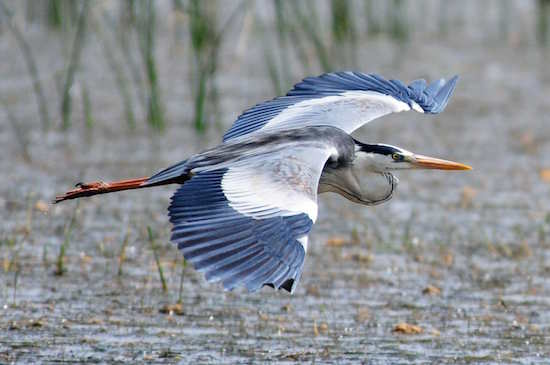 In those evening walks along the lagoon, I imagined myself, like the heron, blending into the landscape, becoming indistinct within it. There were homes all along the water’s edge, but mostly they were summer cottages, with no real sign of life, and it was easy to imagine them all abandoned, the human world ended, these houses gradually deteriorating and repurposed by raccoons and swallows, broken beams and rotted wood and crashed windows all giving way to the chaotic vibrancy of the world, and I, having lost human voice and human strangeness, free to walk amongst the beetles and coots and scavengers and all things wild — the heron the only sovereign left.

J. A. Baker, The Peregrine: “I have always longed to be a part of the outward life, to be out there at the edge of things, to let the human taint wash away in emptiness and silence as the fox sloughs his smell into the cold unworldliness of water; to return to the town as a stranger. Wandering flushes a glory that fades with arrival.”

There were times when the dog and I would startle the heron. Once it nested on the bank just below our path, and as we approached it exploded into flight — I hadn’t know it was there until it took wing, running close along the water, doubling itself in the lake’s reflection. Whatever threat it perceived from the dog and I, it knew the instant that it was airborne that it was safe, and relaxed into a glide, following the length of the lagoon to its end, where it coasted to a standing position, rooted once again, waiting.

Mostly, though, I saw it on the far side, unconcerned with my presence, likely unaware entirely. All its energies fixed on the water below.

Late in his classic book on nature, The Peregrine, J.A. Baker writes of coming across a heron. He has been following peregrines all through the fall, and now it is winter, and the heron he discovers is trapped in the early winter frost: its wings are stuck to the ground, its beak closed tight by ice. But yet it was not dead. “Its eyes were open and living,” he writes, “the rest of it was dead, all dead but the fear of man. As I approached I could see its whole body craving into flight. But could not fly. I gave it peace, and saw the agonised sunlight of its eyes slowly heal with cloud.”

“No pain,” he concludes, “no death, is more terrible to a wild creature than its fear of man…. We are the killers. We stink of death. We carry it with us. It sticks to us like frost. We cannot tear it away.”

Baker writes of his desire to slough off his humanness, to enter fully into the world of nature, but in the terrified eye of the heron this is revealed to be fantasy. It is the moment of the turn in the book, when the elegant killing of the peregrine comes face to face with humanity’s wanton rapaciousness, and nature’s incomprehension and terror. It is the moment all of us who venture to the edge of the human world must face, when we are rocketed back into our own species, and its perpetual alienation from all the violent beauty around us.

I had thought that by watching the heron, I might step outside myself. But the heron, as with all animals, can only ever reveal to you what you already are.

See All Posts by Colin Dickey

Colin Dickey is the author of Ghostland: An American History in Haunted Places, and is currently at work on a book about conspiracy theories, The Unidentified.