THIS: Strangers With Ear-Candy 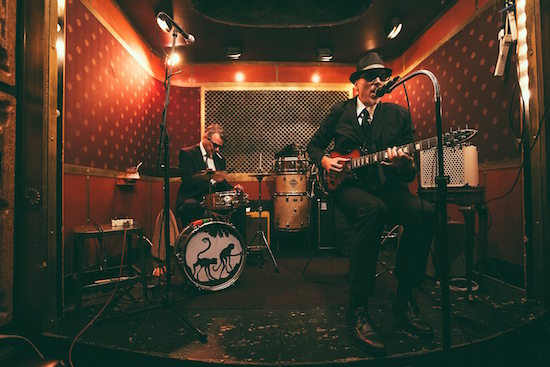 “This is the breathing solo,” the man from 1950-something says from the front of the hipster micro opera-house. The narrow space looks like the kind of diner they’d have in a parallel 1890s, or the drinking car on which the man rode stylishly to hell. He exhales and huffs and sighs for a while, like John Cage doing the audience’s job; later, he’ll finger-sync a guitar solo that he actually just sings. Aldo Perez, when that is his name, dresses like a fugitive movie gangster suddenly forced to pose as a performer, but this is not an act. I mean, it is, but he’s something to believe in — a virtuoso rock guitarist and gourmet satirist (known accomplices include Renaldo The), he sounds like he’s been playing jazz all his life, or at least one of them, as guitar-god postures, faux-maestro facial contortions, and sudden over-emotive vocal escalations break through the sensitive musicianship and masterly singing presence like old mannerisms trying to poke out from the implanted personality of a sleeper agent. Not to overlook the supple bass-player who seems to be co-possessing his body. Or the acrobatically inventive drummer, Nick Parker, who holds down and lifts up the melody while unshakably affecting the default-hilarious, expressionless look of some hollowed-out house-band member who came with the house. The show stops for Glen Heroy on spoons (but who’s counting the silverware); Matt Kanelos, with eye-doctor wraparounds and a keytar like some cosplayer from an adjoining Devo convention, contracting out the vocals on a manic sampled solo that would kill a real a cappella group (and hopefully has from now on); and Jenny Lee Mitchell, in postwar finery and quiet-desperation persona, to belt out sublime bitter standards, rock some soulful clarinet solos and, when all else fails (indeed make sure of it), tenaciously tapdance with her back to the audience. This lot’s sarcasm makes the future safe for sentiment and strikes sour notes that leave nothing but sweet memories. 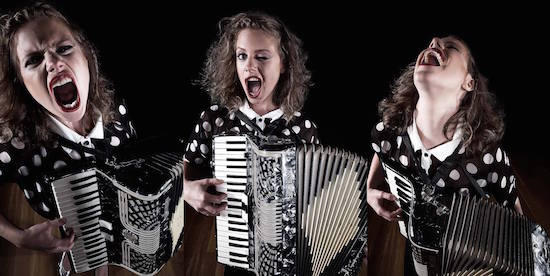 Two nights later in the same space, like an induced recurring dream, I’m back to see another steadily unstable triple-feature, starting with the very well-adjusted Naughty Clouds (a single-guitar/lone-cajon duo with Alexis Thomason and Ray Kubian). Kubian ‘s lifegiving rhythm, and Thomason’s sweet survival in wisely sad syncopated ballads, anchored the ascent serenely. Lizzie Edwards continued toward the edge, with her band The Makers laying a landscape of bleak beauty and her backup singers swooning like a tuned tempest as she drew on deep wells of dark despair to break free of in thoughtful, spontaneous resurrections of bravura blues. Then it was all over with Mary Spencer Knapp, avant-garde accordion-shredder. Fugitive from her usual band Toot Sweet, she was enough and more so, promptly deposing the New Year’s Eve, Eve 2015 set by Gogol as my personal Best Gig Ever. Knapp understands that an accordionist needs to come right to your table or go home, so she was stomping up and down the dive’s one narrow aisle as soon as she started. She would return to the technically-a-stage periodically, to wail French music-hall covers and spin (while never missing a key) like a jewelry-box figure on a wayward space-station. Her mad-genius tempo-switches and well-maneuvered mood-swings make her own compositions as original as any songs I’ve ever heard earn that as a noun, and her instinct for instrumental atmospheres and balletic range of vocal colors and intensities allow for both extremes of genuine comedy and superlatives of sincere emotion; playfulness is the prerogative of the hardest-working. If Brecht and Brel had had a kid, and she was Mary Hopkin taking heroin to go on a carousel that then stampeded, running over Edith Piaf and Grace Jones, it might be Knapp, but since none of that happened she’s pretty much without precedent. Solo or bandleading, catch this act if and when it kills you!