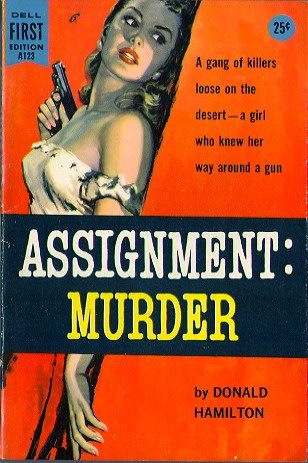 Before striking gold with his Matt Helm series, Hamilton wrote a couple of thrillers in the mold of Buchan’s The Thirty-Nine Steps and Household’s Rogue Male — that is, they feature highly competent but essentially nonviolent protagonists who unwillingly find themselves involved in assassination plots. Here, James “Greg” Gregory, a Los Alamos mathematician, is shot while out hunting. While recovering in the hospital, another attempt is made on his life — by the would-be assassin’s fiancée, Nina. When another scientist is killed, and Greg’s estranged wife goes missing, he heads into the New Mexico wilderness, allowing himself to be captured. Greg and Nina wind up working together… against domestic saboteurs, traitors, and other villains.

Fun fact: Anthony Boucher called Hamilton’s spy thrillers “as compelling, and probably as close to the sordid truth of espionage, as any now being told.”