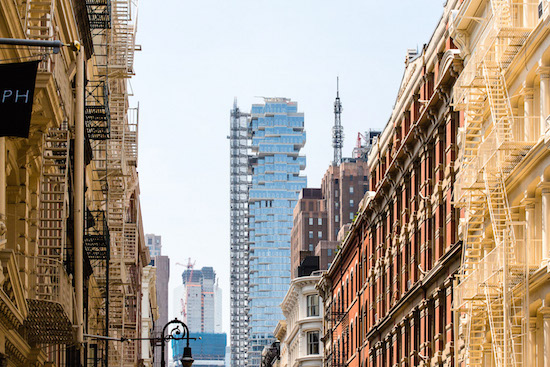 To walk through New York City is to see through it. Layers of history ripple out across the island, no matter how high the visions go. I hope the granite masterpieces never quite get erased by the blank shadows of the glass towers — these ornate palaces of a neo-royal era, the kingdom of the worker and the literally upwardly mobile political boss, are a durable version of the grass and weeds that will always force their way into the city’s narrowed light. Waves on the water, swirls of frosting on a wedding cake, are prized but impermanent, the surfaces we can gaze at but not write on, the cake we can have forever but not eat. In the scrolls and pinnacles of pre-20th-century architecture, these gestures were made to endure, a sign of both whim and infinity in a grand urban capital.

But they also roiled and crashed closer to the earth; it was the towers of the 20th century that served as arrows leading to the stars; lean, long lines with nowhere to go but up. Oddly, they were also a grid, a box, bars and emphatic exclamation-points of only one way there was to be. Jack Kirby was famous for his circuit-board/building-block cities; utopian, neo-Aztec-temple edifices that looked like some cybernetic spires of heaven on earth, or in our heads. These reached their baroque apex in his 1960s work, at exactly the time that the high grid was rising over most American cities. Maybe that’s what made them necessary — the flights of industrial possibility had no fancy, nowhere to jump to; Kirby’s buildings were more like the blocky, broad-shouldered American answer to Oscar Niemeyer’s swooping Brazilian space-temples of the same era. 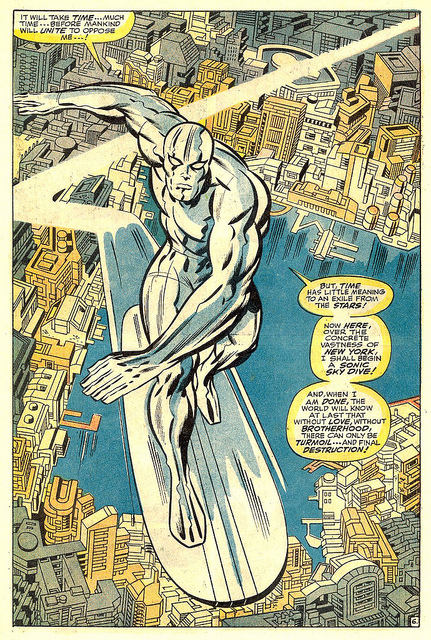 Ironically, many of the structures we look back on with wistfulness now (including the deco minarets of Kirby’s New York youth), are things which, it seems, Kirby was eager to replace — his buildings are a logical progression that public works didn’t yet have the intuition for. Nothing feels as lost as a future that never arrived, and Kirby was looking to a later stage. It’s tempting to think he was not just looking but seeing — the architecture of the current decade seems much truer to what he built in his mind. With ornamentation no longer an enthusiasm or (considering unmatchable old-timey forced labor costs) an option, monumental builders are turning to shape and surface. The twisting, leaning, multicolor-windowed, asymmetrically-gridded highrises of the current moment are more aligned with Kirby’s vision — in some cases, literally; the curves and angles of post-postmodern skyscrapers, unachievable with the tech of Kirby’s times, are like totemic carvings of the speed-lines of his elegant aerial superbeing-battles. 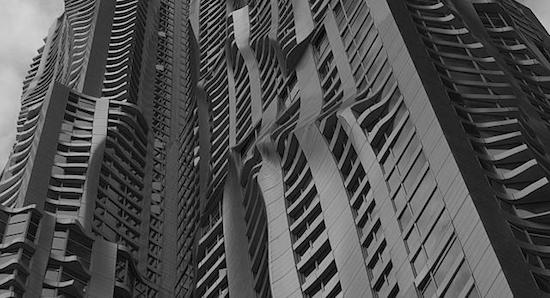 An old Silver Surfer story has the pensive alien musing about why humans pen themselves in congested, filthy cities when their world has so much natural beauty left — an impression accurate to scripter Stan Lee’s living memory of the urban smother of two-Americas, early-20th-century New York — but the grandeur of Kirby’s sci-fi skyline writes a drastic, aspirational counterpoint. Beings of great power would war above these roofscapes, but what is embodied in such shapes is play — not the whim of past great works, but the possibility we persist for — what came after the work that takes too much out of us, without leaving enough behind.