Not long before my wife got sick, she woke from a nightmare in which we had bought some decaying warehouse as a living/creating space but found hatches full of kidnapped and exploited children who’d been left there. As she got sicker the distance between her waking and dreaming selves, and between her own identity and her sense of these other, vulnerable lives, narrowed. I bring this up too often, but nightmares recur, while dreams never leave us. They’re the ones we need to find our way back to.

Following the path that keeps us connected is the odyssey of complete existence, which may be why all my favorite fairytales as a kid were ones which scared me, saddened me, but had somewhere to go — the shadowy wilderness flight from fatherly destroyer back to nurturing mother figure in the Night of the Hunter film, the escape from familiar trauma to unforeseeable freedom in Jack Kirby’s “Himon” from the Mister Miracle comic.

All the earliest such folktales were specifically designed to frighten and socially condition kids — don’t disobey a patriarch, don’t wander into the woods, don’t grow up to be an undesirable female — but the newer ones tell kids the truth while giving them the story to carry in their own hands. The best of these are about how to stand up to fright, and Light: A Dark Comedy will take its place prominently among them.

Eleven-year-old Moth (Tami Stronach), struggling toward the future at the dark age of pre-teenhood, lives in a literally shadowed world in which all natural light has ceased to exist. No one has even the words for concepts like “sun” or related ideas that could shed light, and as people get (not much) older they succumb to a state of suspended animation simply called The Sleep. Children “orphaned” by their parents’ oblivion are put to work in mushroom fields to pay their way through life. This is a new-abnormal that was caused by a well-intentioned, socially shortsighted technology gone awry, and is enforced by an elite that has inherited the wrong lesson about the kindness and comforts of keeping people in the dark. 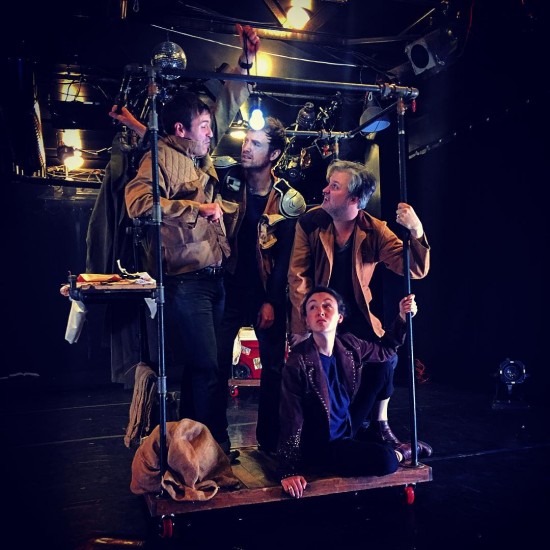 Moth starts to perceive the suspiciousness of the stories she’s been told, and ventures on a quest to bring the truth into view. On the way, we meet the classic cast of clowns and misfits that such Baum-esque sagas harbor: a preposterously tyrannical mayor and an icily munificent “Dream Queen” (both played by Carine Montbertrand, who, along with Jenny Lee Mitchell as a dystopian Keystone Cop, deliver the best kid-culture satires of authority since Charlie and the Great Glass Elevator); a troupe of impassioned, self-sacrificing and ferociously ill-informed revolutionaries (best satire of the Left’s excesses and shortfalls since Life of Brian); a cave-dwelling semi-feral ally (virtuoso shtick and strange poignancy from Brendan McMahon).

Kids either don’t want the lights to ever go out, or welcome the shadows for their mystery and surprise; this mix of intrigue and hazard is given life well, in a staging often lit only by the characters’ head-mounted spotlight-orbs and other fanciful scavenged lanterns. The economical mis en scène is utterly convincing for what surfaces from the shadows and sinks back in; rolling carts convey a kind of coal-mine mobility, and flickering phantom images projected on held-up sheets and other makeshift surfaces provide us with fragments of context and history while keeping the characters’ own heritage dim to them.

It will take a kid’s imagination to fill in the empty spaces, and Stronach’s wary intelligence and contained righteous fire is heartbreaking and heroic. Not that the polyglot of vaudevillian accents and fast pace of action and twists of plot don’t give kids enough to keep laughing at and being thrilled by. Politics is absurd, so even for a young-audiences fable as claustrophobic as Anthem and as openly revolutionary as The Hunger Games, this play serves its messages with gourmet farce (there is one moment of comic stuttering that even a grownup should know better about these days, but it goes by fast). 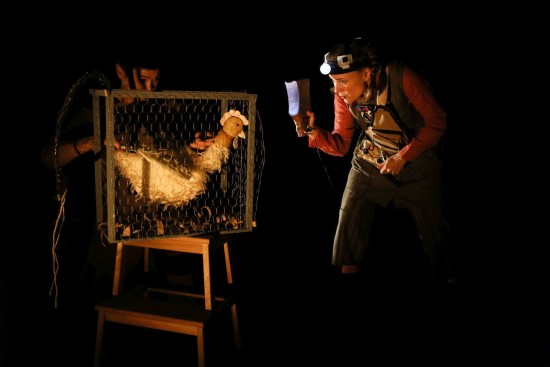 The ingenuity of the lighting (Barbara Samuels) and staging is fascinating from the viewpoint of any age, and combined with the play’s whimsical/eerie puppetry (Lake Simons) and its perfectly emotionally-keyed score and perceptively selected and composed songs (Mark Van Hare), Light is a handbook for engaging young minds on multiple creative levels. The wordplay and culture-building by playwright Greg Steinbruner are inspired and will resonate well with the Minecraft generation (Steinbruner also plays several roles including the obliviously…sunny inventor who started this age of darkness), and the pathos is as captivating as the comedy (especially when Mitchell, in another of several roles, is onstage as Moth’s attentive, overloaded single mom).

Kids are quite aware what they’re going through — and sometimes adults only have to listen in… or inward, to remember how they felt. Military moms and dads who don’t come home; permanent changes to the atmosphere that will make life unrecognizable; servitude for the far-away children who make our society’s toys and lifetime debt and indenture for those who get educated here; news “blackouts” that separate us from the knowledge we need — these are all things that kids know to be worried about, and about which Light knows how to communicate with them.

There is a brightness at the edges of this story, and many laughs and lessons within, but the most rare and important thing that Light shows its young audience is respect.

Light, directed by Adrienne Kapstein and presented by Paper Canoe Theatre Company, continues its initial run through April 10, 2016; that and other details here.