THIS: Looking Through You

The prismatic lives of City of Glass, whose stage iteration is on view Feb. 19 through March 12, 2016 in New York City, details archived here. 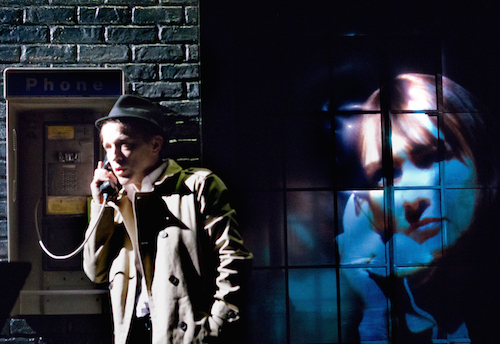 I imagined that, after my wife had died, I would walk every street in Philadelphia, the last place where she’d been helped, retracing our explorations in a kind of one-person, ghostly duet. I never did that, and had forgotten about it by the time I read Paul Auster’s 1985 novel City of Glass, about a writer whose wife and young son have died, and who then walks unceasingly around the whole of New York.

In Edward Einhorn’s stage adaptation, the writer, Daniel Quinn, does have a dance partner, two of them, a man and a woman, echoing or elaborating on his movements, often wearing duplicates of his clothes, and representing a city-wide corridor of mirrors in which his solitude is bracketed by himself.

Are they the lost lover, and the child as he might have grown up? It may be that this formation is simply the triptych desk-photo frame into which Quinn projects everyone he sees, with himself in the middle; the flickering of other individuals on the screen of his grief.

As Quinn, Robert Honeywell plays the voice of every other character in the novel too, in a Homeric play-long monologue, while his doppelgangers (Mateo Moreno and Dina Rose Rivera) mouth the same words and take on those characters’ looks, though all three actors switch or shadow each other’s mannerisms and personae in an expanding and collapsing kaleidoscope of identity. 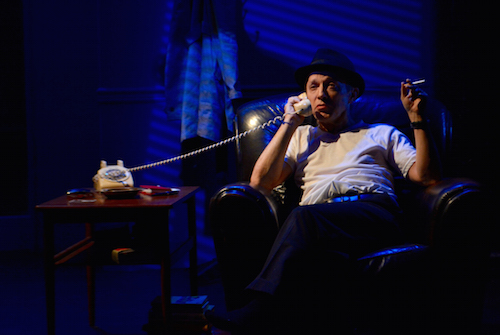 Found selfhood is a central theme of the story, as Quinn takes on the behavior of a character from one of his own detective novels, and assumes the name of his own creator, Paul Auster, when a desperate couple dial Quinn’s number by mistake, thinking he’s a real-life detective named Paul Auster too.

It’s giving little away (since the book gives away nothing) to note the rest of the basic plot, in which a damaged, eccentric young man has survived the social experiment of his deranged PhD dad, who locked him in a dark room for the first nine years of his life in an attempt to elicit a mystic language from him in the absence of real-world stimulus. After years of rehab the man, Peter Stillman, now lives with his former speech-therapist, who married him; she calls “Auster” to help when they believe Peter Stillman Sr. is getting released from institutional lockup after 13 years and remains a threat to his son. Auster/Quinn shadows the old man and, in subtle ways, seems to blur identities with both father and son at different times. He eventually goes looking for the “real” Auster, who is not a detective anyway, and the story closes its own circle but there’s no real place to stop.

Einhorn and scenic designer Christopher Heilman’s imaginative staging opens up a whole city of space while retaining the sense of a cell being paced; the wardrobe of personalities is sifted well by the elegantly tense Rivera and the profoundly idiosyncratic Moreno. Honeywell, bearing the burden of witness and testament for the dispirited writer, his traumatized clients, the delusional old man, the normal family of “Auster” himself and a mostly disembodied but invested narrator, gives a phenomenally nuanced, ghostly griot performance unlike anything I’ve ever seen.

The novel almost seemed to emulate the obsessive notebook in which Quinn records his own movements and the two Peters’ mystic observations; the 1994 graphic novel (by Paul Karasik and David Mazzucchelli) took the word-labyrinths of the prose and spun them into omnidirectional associative images. Mazzucchelli (in attendance, as well as Auster himself, the night I saw the play) said he believed that it was impossible not to elaborate from the spare text in this way; Auster, asked if meaning coalesces around us whether we choose it or not, told me he never discusses his work (spoiler!). Einhorn’s significant contribution is inflection; Auster did allow (as did Mazzucchelli) that he had always heard the book’s dialogue and narrative voice as dispassionate and without affect. I had too; detachment is the emotion coated over all others on the pages of both the prose and graphic novels, but engagement is unavoidable in the immediate space of theatre. Young Peter’s soliloquy in print is a disjointed and manic text that emphasizes his remoteness; on stage, both Honeywell and Moreno do a harrowing, heartbreaking job of incarnating the broken, troubled personality such a speech would come from. 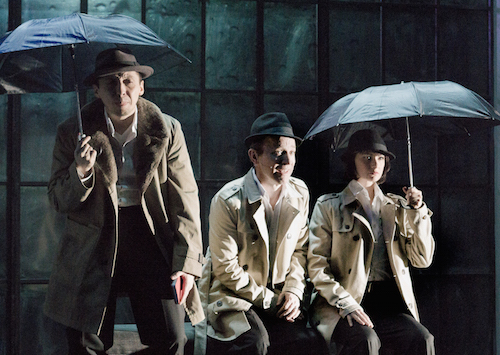 Often, Moreno and Rivera serve as the characters’ ambient consciousness; in Patrice Miller’s inspired, explosive choreography, we will see Moreno as Peter slam into a wall while Honeywell’s Peter remains slumped in a chair storytelling; we witness both the maze of the damaged mind and the scarred spirit careening down it yet ever closed in. The characters are surrounded by a phantom past or overpowered by a solitary, subjective perception of events; Miller embodies this in motions of hazardous panic, in graceful fantasy slow-dancing, in apprehensive sexual postures and ticks, which feel wrenched from choreographer’s and character’s psyche and made meaningful in the stage’s discerning light.

Some phantoms are more specific than others; a curtain of industrial-loft windows segments the stage, and behind it we see slightly unfocused views of characters’ memories or the actions of their alter-egos; on it we see projected video that evokes a palimpsest of experience. At some points this echoes the action in a superfluous way; at others, it amplifies it eloquently, as when we see Honeywell on a park bench behind the panes, and airborne video of him as two characters in a conversation. I was serendipitously seated so that one bar of the window-grid was running perfectly across the physical Honeywell’s eyes like a redacted photograph; this staging allows for fruitful multiplicity of metaphor.

That proliferating potential is definitive of this play; Auster’s poignant yet austere narrative necessitates interpretation like few other works, not so much un-adaptable as completed further with every incarnation. That doesn’t mean the puzzle of bringing it to life and sensation is easy (and it’s said that several filmmakers have tried and given up) — the book feels all-encompassing in its closed labyrinth of expansive reflections; the graphic novel is unprecedented and seems unsurpassable in its inventive perception; and the play is incomparable in its intelligence, ingenuity and insight — and each new step had been hard to conceive of before it existed. Einhorn’s inspiration in distributing the characters among the smallest of ensembles and concentrating the voice into a single player forms both a cursed circle we can’t get into, and an empathic drama we can’t escape; the existential vertigo becomes a viewer’s intensely personal experience. (Christopher Weston’s lighting does much to define and vary the play’s psychic spaces, and Freddi Price’s live-performed music textures the sensory tapestry in both inconspicuous and pervasive ways.) Miller’s motion effects a physicality the equal of Einhorn’s emotional coloration in giving dimension to Auster’s visionary schema of thought and being. 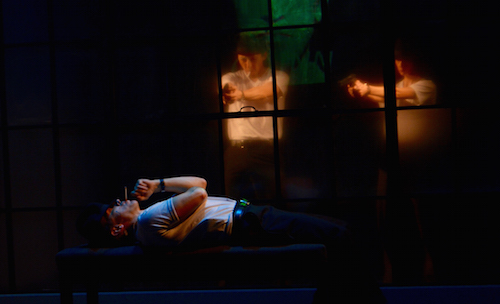 That text does not readily yield up a “meaning,” and it spurs you to choose the right questions, not be satisfied with single explanations. The play is more specifically a ballet of losing yourself inside your own mind and perhaps transcending yourself in the profusion of others; of outliving trauma but not necessarily inhabiting your own life. I could have run into Quinn as I circled the streets of the bleak Reagan-era New York where the book is set, in a depressive fog long before I had as much outward reason for it; not the worst time and place to sleepwalk through, but the waking up has thrown light on more possibilities. Like the echo-beings of Auster’s imagining, Einhorn and his company have created a parallel to the story which moves with its own life and purpose. A vision not of what you walk away from, but of what further may be coming into view.