The following describes almost every minute of the animated film Anomalisa, and still more that were happening simultaneously and afterward…

Many artists have a dream — Charlie Kaufman has a recurring one. The psychological labyrinths of his dramatic reveries take a different twist each time, but all make connections somewhere.

Like Spike Lee, he bounces up into the mainstream atmosphere to get smacked down by commercialism periodically, but is equally at home in the underground. Anomalisa has had two lives of its own already, starting as a recited play several years ago, and then being Kickstartered into an acclaimed animated film on many best-of and awards lists. In one of the rare moves of Kaufman’s that’s unsurprising, his first animated feature is the most troubling film he’s ever made.

In the American purgatory of mid-Bush (2005), self-help guru Michael Stone (voiced by David Thewlis) comes to an indistinguishable business hotel to give a lecture, has a one-night stand with a starry-eyed customer-service rep attending the conference, worships then sours on her, flubs his speech in a ranting psychiatric cri de coeur and lefty-harangue breakdown, and leaves to rejoin the wife and kid he has no feelings for, the end.

I don’t know when I’ve seen a better film that was more unlikable. Short stories happen inside our head, so there’s room for self-examination; movies are before our eyes, and we tend to want to sympathize with someone. It’s an act of bravery, still rare in cinema, for writer Kaufman and co-director Duke Johnson to keep our point-of-view persona a schmuck from start to finish.

In a not-too-earlier era, Michael would be the caged independent spirit, and the way he sees everyone around him with a variation of the same face (and voice, a brilliant motif of emotional claustrophobia executed by Tom Noonan) would be an indictment of conformist modern society. Not so in the age of social-media populism and the twilight of old-whiteguy inerrancy. Michael is troubled by terrible dreams, but doesn’t seem to have one to aspire to while he’s awake; we see him fuck up all over again with an ex he abandoned, stumble into a sex-toy store and buy something to bring back to his son anyway, and mainly just wearily complain.

Only love is shown from most of the people who interact with him (the A.I.-like banalities of the hotel’s staff of wage-slaves is portrayed pretty hilariously too, but it’s clear that they are trapped within these niceties, not relishing them). The conventioneer, Lisa Hesselman, is the only person who has a different voice (in this case, Jennifer Jason Leigh’s), and Michael is immediately, precipitously smitten with her. They have perfectly-alright non-Hollywood sex (the friend I saw this with remarked that showing puppets was the only way to get realistic bodies into a prominent movie), and Michael sees the spark of sainthood in her.

Until the next morning, when he announces he wants to leave his wife for Lisa and then launches into a string of petty peeves about how she eats breakfast; in the glaring light of the rising sun her image grows more indistinct and her voice starts to get overlain by the collective one Michael’s been hearing everywhere else. The fog of dissociation and hypercritical irritation that the depressed can suffer (and sadly, share) is dramatized with an accuracy I’ve never seen. 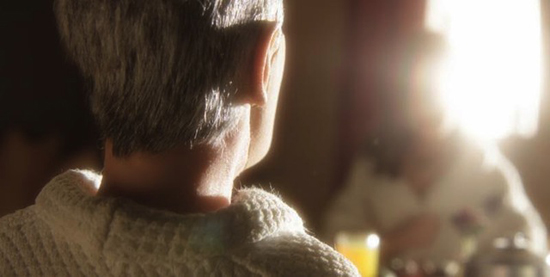 Kaufman is a master of Kafkaesque drabness, so after many scenes of seemingly endless hotel corridors and interchangeable doors that will in fact seem commonplace to anyone who’s traveled in this country, it takes us a while to tell we’re in the movie’s one extended dream sequence, in which Michael is hit on by a hotel rep in a Dante-like cinderblock basement suite, and subsequently discovers that everyone but Lisa (dubbed with the movie’s title to denote how special she is to him), everyone but she and he, are “not real,” a kind of hive-mind mechanism. A few moments before in the dream, Michael’s face (unsettlingly hinged like all the other stop-motioned puppets in the movie) loses its bottom half and reveals a clatter of animatronic machinery — a contradiction he takes no note of, but we and the filmmakers notice that the one needing fixing is him.

Those imperfectly understood workings are a major trope; in the sex shop Michael gets an antique Japanese automaton, partly disassembled, mostly because its grisly, delicate robot beauty fascinates him; this movie leaves you feeling so lousy that it’s easy to miss the sympathy for such damaged figures that Kaufman himself maintains.

It is clear to us that Lisa is nowhere near as insightful and exceptional as Michael briefly imagines, but she’s also kind and expressive and hungry for knowledge; a perfectly appealing human being and potentially just-fine match for someone she didn’t meet five minutes ago and wasn’t born twenty years later than; I can’t remember when I’ve seen a less cruel portrayal of the average American in an arty movie (certainly not with the semi-caricatured realtor that Steve Buscemi dates in Ghost World, for instance).

Lisa has gone through the film with her puppet face partially cracked by some unspecified misfortune; later on, accidentally elbowed in the face by the nightmaring Michael himself, she says it feels “good,” and “intimate,” a sentiment that struck me and my movie-buddy as a callously regressive one to put in Lisa’s mouth, though as the film stays not-unseeable in my mind I realize that it squarely situates Michael as the abuser, seemingly without even her previous one’s consciousness of his crime.

In the end, Michael numbly returns home to a surprise welcome party filled with people he can no longer recognize, thrown by a wife we are given no reason to share his exhausted attitude toward; like her and the kid, we’re so trapped with this douche and cocooned in his perceptions that it takes a while to even see the film as a critique of him, a cautionary reminder that, when you’re feeling isolated, it’s a good idea not to push away everyone you have left. That itself could be seen as insensitive to the sufferer of mental exile, but I have to assume the author has faced the necessity of taking partial responsibility for one’s own psychic health and staying vigilant for one’s ties to humanity (I can tell you this author has, anyway).

In the last scene, an undaunted Lisa is riding back home while writing a letter to Michael thanking him and expressing no regret; this is read aloud in her own voice; again, we have no trouble hearing how she really sounds, the film’s last clue that there’s a kind of salvation she could have taught Michael after all, if he knew how to listen.

Previous Kaufman movies like Eternal Sunshine of the Spotless Mind and Synecdoche, New York processed delirious, nightmarish imagery into elegiac, transcendent impressions of mindful aliveness, heartwarming in the most hard-won way. They had the texture of dreams throughout, but felt like they were sorting and making sense of staggering losses and doubts along the way, as dreams will; in Anomalisa Kaufman courageously, and quite unpleasantly, gives us a dream with no awakening.