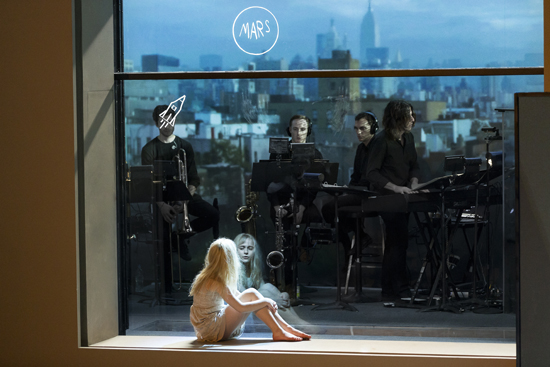 “I thought, ‘This is gonna be a nightmare,’” Michael Hodges, drummer on David Bowie’s Sound + Vision tour, once told me. “Trapped for months with this egomaniac rockstar.” And then, with undiminished astonishment: “He. Was so. NICE. I felt like slapping him and saying, ‘David, snap out of it, you’re a rockstar!’” The protagonist of Bowie’s new music-theatre piece, Lazarus (co-written with Enda Walsh), simply snapped. Alcoholic, withdrawn, creatively blocked, he is the self Bowie managed not to be.

What happens after the end, if you’re still here for it? That’s a question that faces many a long-term figure in a youth-oriented artform, but Bowie is one of the few to try and answer it. Thomas Jerome Newton, title character of The Man Who Fell to Earth (Walter Tevis’ novel and Bowie’s signature film role from the 1970s) is seen here pretty much where we left him, in highrise isolation, living on gin and Twinkies, dreaming of his home in the stars and no longer having to scream at the TVs to get out of his mind, since the voices have taken up their own permanent residence there. (Though we do see him in the classic cycle of blankness and fury that the shut-in psychic sufferer circles through, in paranoid rants you can dance to — “It’s No Game Part 1,” the terrifying new “Killing a Little Time” — and melancholy laments of separation — “Where Are We Now,” the tremulous new “When I Met You” — all delivered with captivating conviction and vulnerable anguish by Michael C. Hall in the lead role.)

As that partial list suggests, Bowie gets to have his Twinkie and eat it too, showcasing some of his most popular and pioneering past songs (along with four fabulous originals) while subverting the jukebox musical in ways you might not even notice ’til it’s still haunting your head later. Through a convenient and clever trope, the song-and-dance is implied to all be part of Newton’s delusions. (The new compositions work perfectly; the older ones, hit and miss, from the tonally ideal ’90s noir version of “The Man Who Sold the World” to an absurdly misread “All the Young Dudes”; the songs from The Next Day, which may have been created simultaneously, in tone and theme now sound like they could have been written for this.)

The overflow crowd from Newton’s mind has an interesting guest list (none of whom he or we are sure precisely exist), especially a teen girl who seems an embodiment of innocence and empathy — unlike the personal assistants and help staff, she arrives out of nowhere, but she’s not an angel and may not be a figment, and if you see the show, you won’t be happy about either. As “The Girl,” Sophia Anne Caruso radiates composed strength and tragic equanimity in the show’s best performance. A celeb-stalker named Valentine (or so he says) talks his way into Newton’s life too, in a horrifically riveting, serial-killer-next-door portrayal by Michael Esper.

Hall does a remarkable job of seeming walled off from the people and events around him without disappearing from the foreground; distant but central. The play’s dramatization of Newton’s loneliness and paralysis, and of his assistant Elly (Cristin Milioti)’s lack of direction and loss of self, are a harrowing and redemptively understanding portrayal of depression’s inertia and dissociation’s abyss for anyone who has lived through or witnessed these. 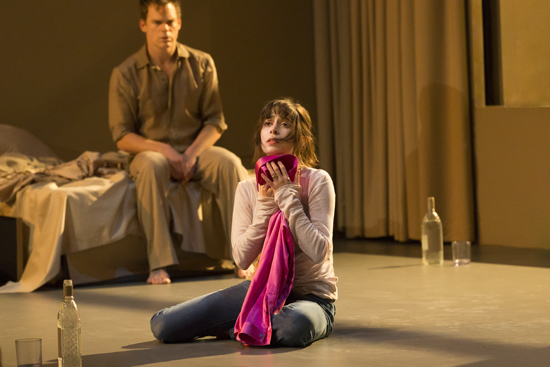 Director Ivo van Hove’s ingenious staging, Jan Versweyveld’s scenic and lighting design and Tal Yarden’s video work create a malleable mouse-maze for the characters in those mental catacombs, though the setting is ostensibly one stark room. An open refrigerator lights the stage like a blinding casket, a light no one moves toward. The live band is right beyond what should be the windows of Newton’s penthouse, turning his living space into a kind of interrogation-room or experiment-site with two-way glass. On this glass wall, smudges of those trying to look out, and a few other symbolic pictograms that appear when we’re not looking, accumulate like a neglected blackboard with nothing learned. A single slab-like video screen counterpoints the action with a message-confetti evoking Nicolas Roeg’s editing style in the earlier film, and sometimes duets with the actors’ movements; at one point Milioti smashes her fist against it and a red, graphic glass-shatter appears on the screen; in the elusive lives of these characters, even that mark is not made materially. (This vision is contained, but shutters that can rise and lower over the “windows” at times make a continuous projection surface with the walls, which allows the imagery to leap the video frame, dissolving the structures around the cast, painting the space in transient rash-like patterns, surrounding everyone in passing phantom locales and realities.) At many points Newton paces his room while other whole scenes play out around him; it feels like a spacetime palimpsest of what has happened there at other points, layered with the monotony he lives within at all times — Bowie, Walsh and van Hove understand that hell is not a quest without an end; the real essence of damnation is routine.

Milioti bravely tiptoes the precipice of hysterical-woman stereotype (stretched between a near-disastrous glee-club “Changes” and a note-perfect cabaret-punk “Always Crashing in the Same Car”), stuffed into a gender-role she thinks Newton wants as she delusionally cosplays Mary-Lou, his lost love and the one person who once connected him to this world. In a telling scene, we see Elly and The Girl both dressed up as a version of Mary-Lou, one demanding, the other adoring, pulling at either side of him on the floor while the video-screen he’s backed up against effigies the actual Mary-Lou, impassively watching over his emotionally dismembered view of a woman his own scattered self perhaps can’t accept as a full person.

Dress-up is a central concern of the show, as it has been in Bowie’s own on-stage life, but here the costume can go on without you. Clothes, emptied of human presence, are a motif at many points; characters breathe them in for their lingering scent of a lost one, or put them on in an attempt to be possessed by that person. It’s the surfaces we shed, the shades we are entitled to. In one remarkable moment of choreographed disappearance (a tour de force in Annie-B Parson’s dance-direction), Newton tosses items of his ex’s saved wardrobe one by one onto his bed like a macabre reversal of Leo DiCaprio as Gatsby tossing his million shirts and sweaters over a balcony of his mansion, after which Newton jumps in bed and simulates rapturous sex with the fabrics, like Moira Shearer dancing with wind-swirled newspapers in The Red Shoes, as they gradually entwine him and finally all settle and bury him like a heap of landfill scraps. 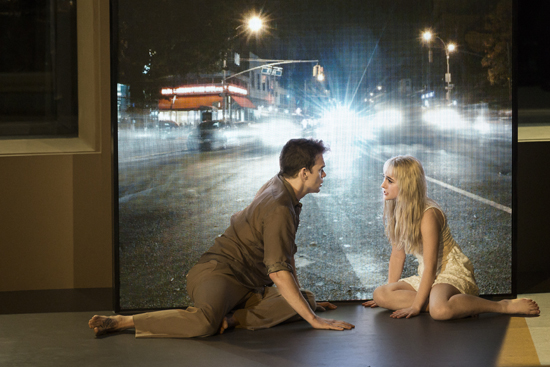 Valentine moves through a series of horrible unseen acts and undetected manipulations, spouting recovery-speak and at one point giving a not-so-coded trans-positive soliloquy that would be beautiful were it not being co-opted by a psychopath. Putting these terms in the mouth of Newton’s nemesis lends unsettling ambiguity to the narrative’s therapeutic themes, but Newton’s obstinate avoidance of help and Valentine’s tyrannical trauma-addiction are in a dangerous dance of missing the point; though a close aide and The Girl urge it, no one is promising Newton that healing will be easy, and Lazarus doesn’t promise this either. In the show’s most indelible setpiece, a black-suited Valentine stands before the screen, with blurting inkblots on it fanning out in either direction from him like some abstract angel of death, eventually engulfing the stage while he releases black balloons, from the floor, not the ceiling, as in some stygian political rally, while he sings “Valentine’s Day,” originally an anthem of aggrieved and vicious mass-shooters, which fits right in — it’s his Party, and you’ll die when he says so.

The scene is echoed later in reverse theme and palette, with inspired all-white good-angel symbolism (though this of course is the color of mourning and passage in many cultures too). The Girl, who reappears here, is associated with a specific atrocity we learn about just like Valentine is with an amorphous history of trauma he never shares, but she has used it to shine brighter against the darkness that was cast. The Girl too seems to be here to bring a close to Newton’s pain and/or existence, and is with him at the end, though she departs under sad but ultimately serene circumstances while Newton seems to find final solace not through spiritual transcendence or physical escape but by sinking so far into his mind that he can’t be retrieved.

Right before the end, they do a brilliantly designed and choreographed — and strangely, deliriously frolicsome and showbizzy — version of “‘Heroes’” which at first I thought was shark-jumpingly frivolous. But it didn’t take long to dawn on me that, while Newton is looking for a happy ending, Bowie, Walsh and van Hove are not. Closure for our hero is a coffin lid, and not even literally; we leave him lying there in a quiet oblivion, lost not in the stars but the darkness between, or maybe a delusion he can maintain forever. The preceding song can seem mocking, or just merciful, and in either case, real. It’s the final revolution the creators accomplish in this too-often feel-good form. Newton does not get away, and there’s no god to raise him, but in Lazarus David Bowie shows there’s no past he can’t break from, and no future he can’t rise to meet.