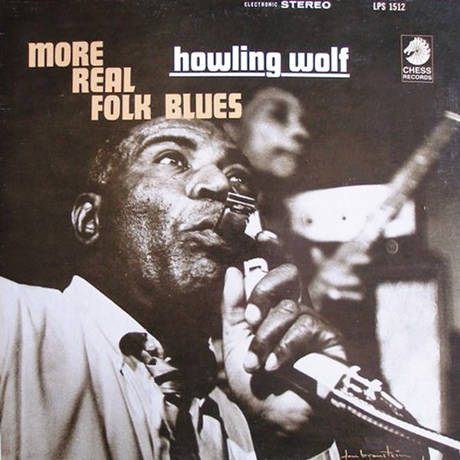 Chester Arthur Burnett took his stage name, HOWLIN’ WOLF (1910–76), from a threat — his mother told the boy that if he was bad, “howlin’ wolves would get him” — and built his identity on making the threat his own: If any wolves came around, his giant stature and ripsaw voice proclaimed, they’d be the ones getting got. Disciple of Charlie Patton, worshipper of Jimmy Rodgers, rival of Muddy Waters, Wolf was a walking, stalking amalgam of rough and ready forms, practical scholar of the dirtiest roots in the American South. He served his apprentice years as a Mississippi bluesman, helped found rock‘n’roll in Memphis, and at the age of 50 established a sweet home in Chicago and a slaughterhouse sound at Chess Studios. In league with songwriter Willie Dixon, guitarist Hubert Sumlin, pianist Johnny Jones, and other malefic henchmen, Wolf created a run of records unsurpassed in rock for menace, or in the electric blues for white sparks, knife points, and city heat. For starters, take Moanin’ in the Moonlight (1959), Howlin’ Wolf (1962), or The Real Folk Blues (1966). Each is as volatile as bare wires, as raw as a flayed body. Each sounds like it was made on the killing floor — also the title of maybe his greatest recording. Beware, little boys and girls: Howlin’ Wolf will get you.

On his or her birthday, HiLobrow irregularly pays tribute to one of our high-, low-, no-, or hilobrow heroes. Also born this date: Anita Berber, Maurice Sendak, Nat Hentoff, Judy Garland.