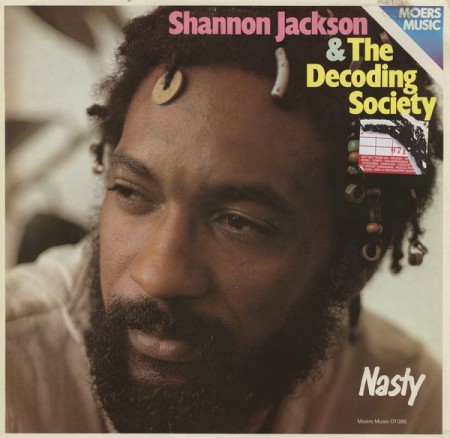 Writing about RONALD SHANNON JACKSON (1940–2013) in September 1981, New York Times critic Robert Palmer called him “one of the most provocative bandleaders working on the razor’s edge of free-form, fusion and funk.” Given Jackson’s past, it made perfect sense. He came from Texas, where his father ran Fort Worth’s only black-owned record store and his mother was a church organist. Like many of that city’s musicians of renown — including his contemporary, Julius Hemphill — Jackson attended segregated I.M. Terrell High School and eventually settled in New York. Though its mid-1960s jazz scene was increasingly fractious, Jackson sidestepped inter-generational factionalism, becoming close with both bop-era trumpeter Kenny Dorham and avant-gospel tenorist Albert Ayler, with whom he recorded in 1966. Kicking heroin and, in 1974, discovering Nichiren Shoshu Buddhism, led to an astounding reemergence with Ornette Coleman’s electric Prime Time ensemble, whose high-energy, “harmolodic” workouts provided the template for Jackson’s own group, Decoding Society, formed in 1979. As a composer, Jackson enfolded black culture whole and, among his musicians, two young Brooklynites, bassist Melvin Gibbs and guitarist Vernon Reid, consistently met their leader’s fearsome yet ecstatic vision. Jackson’s 1984 solo album Pulse was something else: percussion and poetry, with oft-neglected Sterling A. Brown’s “Puttin’ On Dog” a highlight. “Life is rhythm,” Jackson later explained. “The rotation of the earth; the blooming of flowers; the way we talk; the way we walk. So as long as a drummer knows where the one is, and can project that feeling, everything is cool.”

On his or her birthday, HiLobrow irregularly pays tribute to one of our high-, low-, no-, or hilobrow heroes. Also born this date: Jack London, Emmanuel Levinas, Ray Price.