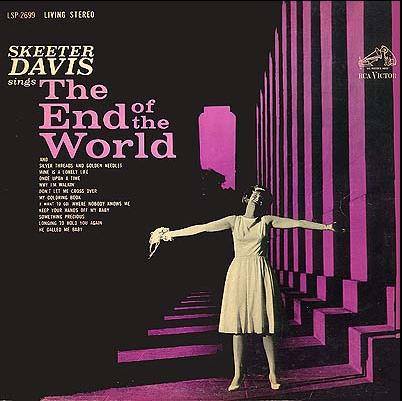 Many pop songs have prophesied the end of the world as we, or at least the people who made the song in question, know it. And SKEETER DAVIS (1931–2004) was certainly not the first or last singer to successfully posit earthly apocalypse as the direct result of personal bereavement. But “The End of the World,” her #2 hit of 1962, presents the catastrophic causality with such dolor and depression that it remains more convincingly defeatist than most other songs that have exploited the human fear of you know what. It is a compliment to Skeeter’s subtle skill and command of material (she was, after all, a brilliant country singer first and foremost) that she could fashion a pop classic from such affectless, undramatic means — before then going on to sing “I Can’t Stay Mad at You,” “Moonlight Promises,” “Foggy Mountain Top,” “My Last Date,” and a dozen others, performances of such pained loss or leaping delight, they make it unimaginable that time could be anything less than eternal.

On his or her birthday, HiLobrow irregularly pays tribute to one of our high-, low-, no-, or hilobrow heroes. Also born this date: Milton Rogovin, John Hartford, Robert Quine.