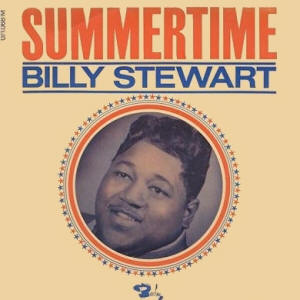 At 300 pounds, BILLY “FAT BOY” STEWART (1937–70) was, more than most people, a prisoner of gravity. But his voice — high-pitched and epicene, a collection of trills, swoops, jungle calls, and deviations from the straight line that could strike a listener as creepy, marvelous, or both — was anything but earthbound. Certainly there is no completely terrestrial explanation for the 1966 Top Tenner “Summertime,” in which Stewart and the Chess Studios house band steal, strip, and reconceive the Gershwins’ pastoral lullaby as a riot ballet, an orchestrated explosion. Especially in its full five-minute version, “Summertime” is an epic that grips the earth while reaching out to other realms — the sound of the city, and a hot gaping hole in conventional musical reality. Stewart approached genre vehicles like an innocent alien, no prejudice or preconception, thrilled to be remaking them as shiny new flying machines. Some of these experimental models were clunky and impractical and never left the ground (most of the “Summertime”-exploiting follow-up LP Billy Stewart Teaches Old Standards New Tricks — though amazingly, “Exodus” works!). Others were so brilliantly intuitive they shot past the competition with the velocity of a rocket dusting a Cadillac: 1967’s “Why (Do I Love You So)” foretells early ’70s neoclassical soul pretty much to the note. And then, on an early morning in January 1970, Billy Stewart, not quite 33, drove his car off a North Carolina bridge, plunging into the Neuse River and killing himself and three members of his band. Gravity had come to claim him.

On his or her birthday, HiLobrow irregularly pays tribute to one of our high-, low-, no-, or hilobrow heroes. Also born this date: Dwight Macdonald, Harry Houdini, Nick Lowe.