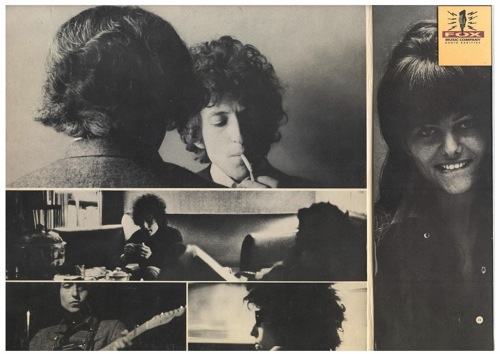 The mystery that is reality:

The collage inside early editions of Bob Dylan’s Blonde on Blonde (1966) features a Jerry Schatzberg photo that later vanished. A mystery woman bites her smiling lip, and looks out from the shadows her sexiness seems to conjure. She is unreal, her skin as rich and dark as silk, her promise as perfect and impassable as the space between your eyes and hers.

But as the New Orleans whore and desert survivor in Sergio Leone’s Once Upon a Time in the West (1969), the same woman is tall, golden, not shadowy at all, with eyes blasted deep by a lifetime’s worth of losses. Voiced into English by some witty-throated Cinecittà tigress, she is entrancingly empathic whether submitting to Henry Fonda’s dirty whisper, trading noirish banter with Jason Robards, peering through Charles Bronson’s mask, or bringing water to the railroad slaves. Upon the first, life-changing viewing of this, the greatest movie ever made, one falls quite completely in love with CLAUDIA CARDINALE (born 1938). One tracks her career backward to find her the elusive study of vastly differing auteurs — Visconti (The Leopard), Fellini (8 ½), Edwards (The Pink Panther), Brooks (The Professionals), Herzog (Fitzcarraldo) — all of whom catch pieces of her while failing to take anything like her true measure. One realizes that she’s been caught, really caught, only twice — by Schatzberg at the moment she bites her lip, and by Leone, who knows that Claudia is not only magnificent but cagey, crafty, soulful, forgiving, and enduring, that she is real as well as unreal, and that in her lies the mystery that is reality.

On his or her birthday, HiLobrow irregularly pays tribute to one of our high-, low-, no-, or hilobrow heroes. Also born this date: Samantha Fox.

READ MORE about members of the Anti-Anti-Utopian (1934-43) Generation.