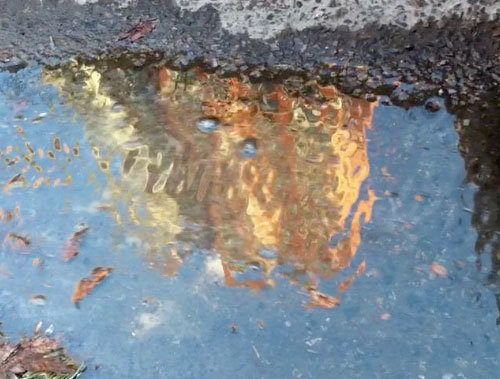 Case 29 of the Mumonkan:

Huineng’s statement isn’t conclusive either, but only another provocation. The wind surely moves, the flag surely moves. Is he merely trying to shake up his pedantic students to stop them from useless speculation?

Mind is moving, says Huineng, and the inquiry is pushed one layer back, the movement of flag or wind logically only present to a mind, the event calibrated to the specifics of our perceptual limits and subjectivity. We do not even know how the movement might register to a fruit-bat or a cockroach, much less to a being in another dimension.

If the mind is moving, what then is still? The first question of meditation is also, infuriatingly, the last.

As an artist of the reflected world, I looked into puddles for possibilities, and found many wonders there, the tops of buildings, clouds, trees, birds, all shining up out of the collected detritus of city life. I saw wind and water and mind on the move, and for moments dissolve into stillness.

…the universe is reflected in the mind like the sun on the water.