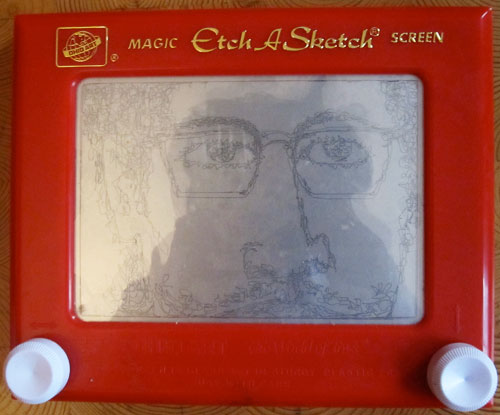 I have some early memories of what I’ll call my ontological anxiety. I drew one dot and then another next to it and in a flash realized that by simply deciding I could see those dots as two eyes. Add another quick slash and I not only had a mouth but an expression, a smile, frown, goofy smirk. That moment where the abstract becomes familiar, the geometric turns narrative, when nothing is suddenly something, has never ceased to delight and frighten me in equal measure. As a child, I also diligently practiced meditation and experienced the opposite movement where thoughts and images and identities dissolve into nothingness.

In subtle and overt ways, this ontological anxiety runs through much of my written and visual work, taking different shapes as my inquiry and practice move through novel articulations. Childhood through young adulthood I mostly drew and made small sculptures, and I liked portraits in particular when I was young, copied from books of obscure 19th Century Polish painters my mother brought home from the research library where she worked. Drawing those portraits too there was the exquisite moment when two small marks or a minor erasure suddenly brought the face to life. I made one self-portrait around the age of twelve mostly from a photo, though I remember checking in the mirror to get the spark of presence just right. I did a series as a young man of stylized self-portraits, all angles and windows and curling cigarette smoke, inspired by the German Expressionists.

And there I stopped. For many years I dedicated myself solely to writing, wrestling with the same slippery Self in poems, stories, scripts. I resumed my study and practice of meditation, mostly Buddhist and Tantric, two rigorous contemplative traditions with a great deal to say about the nature of the Self. One fine day, I took my old camera (with film!) out for a walk and started a series of self-portraits. In the city, you’re always part of a larger play of light, and through the day, you catch yourself tens if not hundreds of times, not always consciously, sometimes in peripheral flickers, and all those mirrored impressions create a holographic image, an identity held in the mind. As a meditative practice and a minor compulsion (the line is thin sometimes) I paid attention to my reflected and refracted selves, projected or ghostly, present and absent simultaneously. I collected reflections like a bird watcher.

The gesture is the simplest, regressive and infantile in its immediate pleasure, the recognition of oneself in a particular time and place. But look long enough or enough times and location gives way to the more grown-up experience of dissolution into greater relationship. In that flash of recognition I’m relieved of ontological anxiety. The Self forms as it vanishes, evaporates as it condenses, and that’s the fun part, the invitation to play, make a story, a poem, a mood. And where my head appears in each image is experienced by me at that very instant as an open expanse containing everything else in the picture.

Vijay Balakrishnan was born in Ootacamund, South India, and immigrated with his family to Chicago at the age of nine. He’s co-written the feature screenplays Karma Local and Toussaint, published fiction in Miranda Literary Magazine, and his prose and photographs have appeared in The Paris Review. Recently, he published his first novel, Peace INC., which was profiled in HiLobrow.