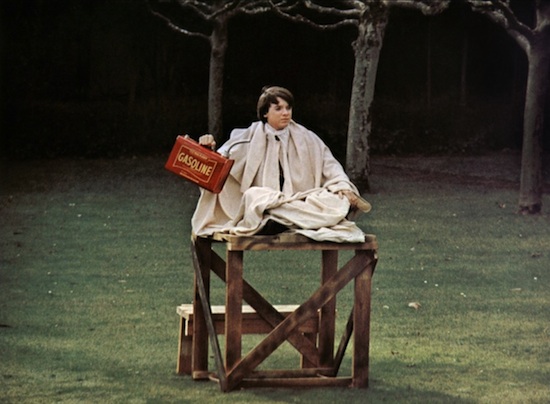 I don’t blame BUD CORT (Walter Edward Cox, born 1948) for resenting Harold and Maude, and the cheap attempts of interviewers to pin “quirky,” “odd” and “weird” to his lapels. (Though his case would be easier if his life weren’t dotted with such quirky oddities as the several years he spent as a house guest at Groucho Marx’s mansion, his disfiguring car accident, or his mid-1970s flirtation with the cult known as The Source.) For an actor, it is a kind of special hell to be typecast and he fought the heavy hand of Hollywood as fiercely as any actor could. He didn’t make a movie for five years after Harold and Maude, working instead in theater and creating a cabaret show. But consider what an icon really is: stained glass, flattened to something barely more than a silhouette, but illuminated, vivid and sacred. I don’t doubt that it was better for Bud Cort to give a magnificent performance of Krapp’s Last Tape and sing Gershwin in a Paris club, but I suspect actors have it wrong. It’s better for them to play many roles and stretch artistically, but their cultural value, their great service to the world is to be encased in glass, sacrificed so that when the light shines through them something holy stirs and awakens in us. It is rare that any actor passing through his career should walk before a camera and be so pinned to his image, fluttering helplessly in the kill jar of our collective imagination. But just as surely as that Jaguar was welded to that Hearse, Bud Cort is welded to Harold. Rewatching the movie in the last year I found myself drifting from the narrative’s interest in Maude’s life-changing force, and their delicate chemistry. Instead, my eyes drank up Harold, his mod-goth insouciance, his slow warming to Maude and his naked anguish. And after I wince at that gorgeous car’s flattening I watch his narrow, lanky frame silhouetted, backlit by the sun, sacred, exiting to the plink of his own banjo.

On his or her birthday, HiLobrow irregularly pays tribute to one of our high-, low-, no-, or hilobrow heroes. Also born this date: Eric Idle.