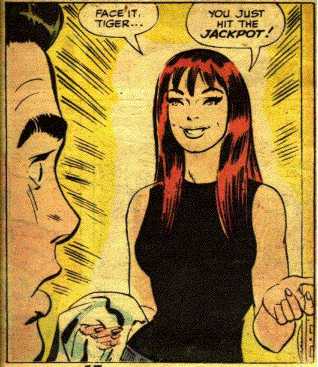 It’s no slight to rank JOHN ROMITA, SR. (born 1930) as the third-most important artist in Marvel’s history after Jack Kirby and Steve Ditko. When Romita came to Marvel after eight years of romance comics at DC, he took over Spider-Man from Ditko, and steered the strip away from the neurotic to the angsty but mod and sexy. You can hinge the entire history of Marvel on a single Romita panel from 1966: the first appearance (“Face it, tiger… You just hit the jackpot!”) of Mary Jane, the sexiest girlfriend in comic-book history. Marvel hit the jackpot, too: Spider-Man went on to eclipse Fantastic Four as their flagship series. Normally at HILOBROW we wouldn’t celebrate such a shift, but Romita brought more than pretty linework and pretty girls to Marvel: his dynamic layouts, iconic covers, and peerless inking (particularly the brief run of Romita’s inks over Gil Kane’s pencils on Spider-Man) redefined the Marvel house style, introducing a classicism descended from Milton Caniff’s Terry and the Pirates. Besides, there’s no way Ditko’s conception of Peter Parker (twisted and tortured, jammed into cramped panels and cruddy Manhattan alleyways) could have survived through the swinging Sixties (1964-73). Without taking him too far from his core loserdom, Romita freed Spider-Man to swing — literally — through Manhattan.

On his or her birthday, HiLobrow irregularly pays tribute to one of our high-, low-, no-, or hilobrow heroes. Also born this date: Robert Motherwell.