HILOBROW is proud to present the fifteenth installment of James Parker’s The Ballad of Cocky the Fox, a serial tale in twenty fits, with illustrations by Kristin Parker.

In Fit the Fourteenth Cocky went cross-country in pursuit of the kidnapped Champion. Accompanied by Shakes the badger he snooped through a farmyard — where a golden retriever called Big Boy overwhelmed them with his amiability — and then headed straight for the Black Pond. Night fell, rain fell, Champion’s abductor Brutus was found dying, and in the dark watches Cocky found himself alone and soaked in the middle of a ploughed field, confronting the monster Jackpot.

Jackpot took my eye, my right one. My world of sight is halved. He smashed up my back leg too, my left one. I’ll limp forever, says the old girl down here in the sett. She’s been treating me with heavy badger-medicine: a lot of droning over my proneness, deep oaths, and plants waved under my nose. And then, as I strengthen, the inevitable grumbles of reproof. Friggun fox wastun my time, and so on. They’re all the same, these Black Ponders.

I feel not too bad actually, I must say. Lying here, listening to the badgers wuffling obscurely in their tunnels… I’ve come to appreciate their discretion, their decent low-keyness. Their home-stink lines my throat and sinuses like insulation. And other beasts helped me in the ploughland, didn’t they? Who preserved my red arse out there? Stoats, that’s who. Stoats! Mackie Viles and his Royal Guard. Theirs were the spritely advancing forms I saw, as I sashayed in for my final attack — eight or nine stoats, lined out fizzing and glowing, each weighing no more than a banana. I had my teeth somewhere in Jackpot, some part of him, which end I couldn’t tell you, and I wasn’t letting go. He was howling and shaking me to pieces but I was clamped unbreakably, just a brainless set of jaws by now. There was a quite fascinating pain in me, like a second body — it had a head, legs… So complete I could ignore it completely. And Mackie’s fighting ermines leapfrogged in, crying for blood, and — well, I’ve told you about weasels and stoats. How they move, how they fly. How they twist into the air to find its unsuspected pockets of pure violence. You could almost feel sorry for Jackpot. They sent the old abomination shambling back to his pond with bits falling off. At daybreak he was face-down on the surface like an afterthought. 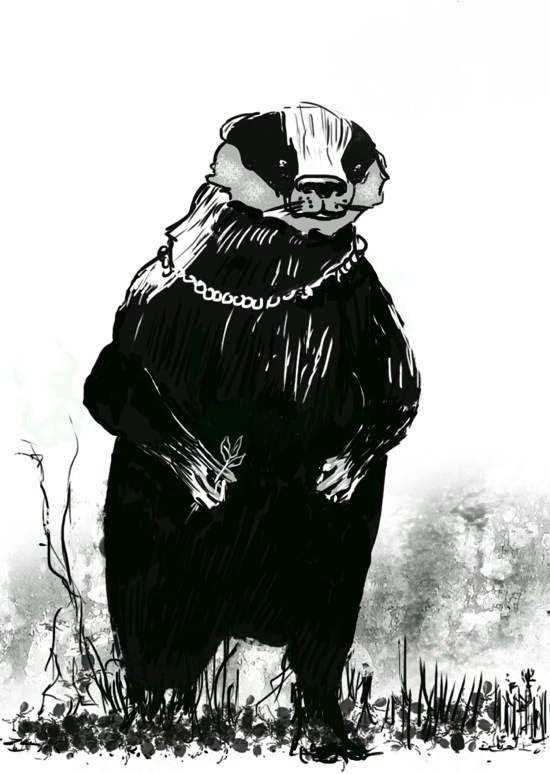 My torn eye? No clue. Never felt it. One of Jackpot’s edges must have caught me. It’s calmed Cocky down, is the strange thing. Sedative badger-medicine has had its effect too, no doubt, but this fresh continent of nothing on my right side has set my mind exploring like Marco Polo. In its darkness I’ve been thinking. Images, long submerged in my gorgeous personality, have begun to rise and float against the earthen sett-walls. I’ve been remembering. Like, remember that night me and Champion were on the towpath, on our way to Patsy’s wood… I had dined on — what? Two tubes of Aquafresh and a shoelace. I was ragged anyway, steaming, and ready to push the rabbit into the canal for his slowness and truculence. And then up ahead, cruising and ghostly, I saw the swans. Eye-masks, cathedral angles. Two of them. Ready for us, too — as we stumbled closer they were winding up for combat, wings spread, great gusts of fluster animating them from below. ‘Come here, drowner,’ called the first one: Ramona, absolute queen bitch of the canal. ‘I’ll dunk you like I dunked that other one.’ Her neck was drawn back like a bowstring. She wanted, she needed to get her orange beak on my foxy pommel and shove me under, down there with the boots and the bedsprings. ‘You’ve got monster feet,’ I said, and they both hissed nastily. Swans hate to think about their ugly feet. We flattened ourselves against the wall, anyway, went around them as their heads jabbed and struck at us from the water. And I thought no more about it, almost forgot it. Only that slight searing of swan-hate stayed on my brain, like a lesion.

But… that other one? Swan-chatter. Bob was out there on the towpath for a meeting with Blandley, wasn’t he? He told me about it a couple of days before. Blandley wanted to talk to him, he said. A private matter. You could say this was Bob’s weakness as a boss — his passion for knowing everything. Gossip, wheeling and dealing, hushed confidences, backroom stuff: any wanker could get his ear if he thought they might have a titbit for him. So he goes out there for Blandley — without a guard, without Rumpy or me — and the next day they scoop him out with a net, in the callous dazzle of the afternoon… 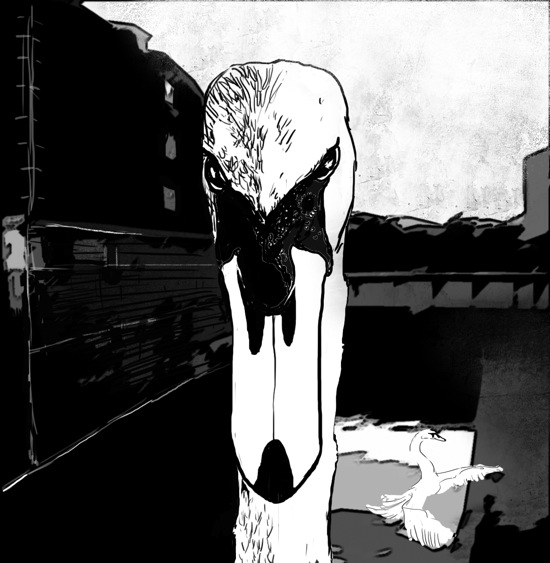 Frost on the ground as I hobble out of the sett. White fields, ice mathematics in the grass. With the first breath of fresh air, my first for days, I can feel its crystals forming and then melting in my lungs. Come on, universe — see me whole, damn it. Not in slivers, slices, not in the shitty fox-fragments. See me like a lover! Shakes is waiting for me at the entrance, sentinel-like, a great umbrageous lump filling my blind side.

‘Lost your eye there Cocky,’ he says.

‘Noticed that, did you?’

‘And your legs done in too I see.’

‘Will you shut your face? Bloody hell!’

‘In his fuckun glory. Come and see.’

The day’s rising now, and the frost withdraws to the shadows. We find the Champ on the other side of the wood, sitting on the dais of a felled beech-tree and attended to by a clump of enraptured young badgers and badgerettes.

I totter forward, on the point of hailing him when Shakes puts a paw on my shoulder. ‘Lissun a minute.’

So I listen. Champion, using his most dramatic intonations, is telling them a story.

Look at these gathered beings, oohing and aahing, with the breath-smoke twisting above them. Pouring life and heat into the great emptiness. Which receives it… emptily? Much to learn, Cocky, much to learn.

‘What happund with Jackpot then,’ pipes up a high-voiced badgereen. ‘Tell us that.’

‘I waited there for Cocky,’ says Champion.

‘But like,’ says another badger, ‘Jackpot wasnt rippin you…?’

‘Well we were talking,’ says Champion. ‘He was talking. He was breathing and looking at me with his red eyes. Saying things. It was like talking to Cocky at the hutch in the morning.’

Next to me Shakes gives a snort of mirth.

Champion spots us. ‘Look,’ he says. ‘Here come Cocky and Shakes!’ And I note with pleasure the tiny shockwave of foxy celebrity that runs through his audience. Heads turn, eyes widen… I made a name for myself around here, didn’t I? Then Shakes wades in and scatters the crowd with a few well-placed swats. ‘Bugger off,’ he grunts. ‘Go on. Shoo.’

‘Alright pal?’ I say to Champion. ‘Having some fun?’

‘Of course they do. Our stories are magnificent.’

‘Are you better now?’ 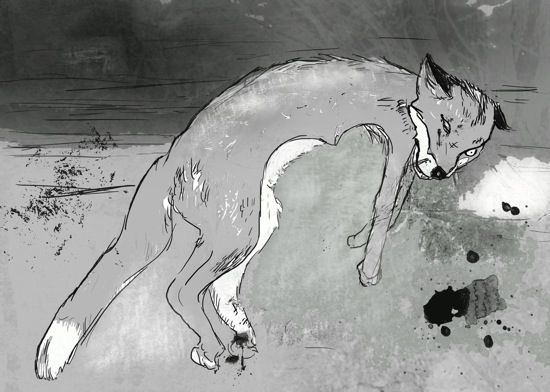 ‘Why are you winking at me? Is there a joke going on?’

‘So it’s not really a wink anymore.’

He stares, waits, nose working, ears fixed. I might as well face it: after all this time, all we’ve seen, all we’ve been through, this rabbit is a complete fucking mystery to me.

‘So listen — we should be thinking about getting back, you know.’

‘What do you mean, back where? Back to the Borough. Back home!’

‘Our work here is done.’

‘Cocky, I want to stay here. With the badgers. They listen to me.’

Now. You’ll say, perhaps, that I should have been ready for this. That I should have seen it coming. Champion at the Black Pond, after all, is a changed rabbit. A risen rabbit. No longer the abject hutch-dweller of his Borough days, misprized by rats and squirted with water-pistols, keeping company with a toxic fox and so on, here he has status, and mythic glamour. In the cold morning, set up on that tree-stump like a slightly mad sundial… Those young badgers were hanging on his every word! Country life is good for him, too — the exercise, the nutrients. And to risk the long trip back, with who knows what waiting for us? Well.

But still I am astonished. I am gobsmacked, frankly. I’m —

‘What?’ I say. ‘Don’t I listen to you?’ I lean on Shakes. There’s a great blurt of misery inflating in my lungs like a whoopee cushion.

Champion scratches his head. Now what does that mean?

‘Black Ponders ull take care of him, Cocky,’ murmurs Shakes in my ear. ‘They think hes magic like. Or magnetic or something.’

‘But I didn’t kill Jackpot,’ I say weakly. ‘That was the stoats.’

‘Cocky. Only one saw them stoats was you.’

‘Seriously. Badgers found you half-dead and a Jackpot trail back to the Pond. No stoats nowhere. And no tracks.’

‘But I don’t — Mackie Viles sent them. His Stoatness… ’

‘Mackie Viles aint known to the Black Pond. In other words we never heard of your Mackie Viles.’

I’ve gone all floppy now. I seem to have rushed my convalescence somewhat — surely I should still be on my back in the dark…

Were those salvific stoats all imaginary, like the Angels of Mons?
Cocky without Champion: is it possible?
And what’s next for our hero, as he turns his reduced sights towards the Borough?
Find out in the next episode, on Thursday, December 16th.

Read the fifteenth issue of The Sniffer, a COCKY THE FOX newsletter written and edited by HILOBROW’s Patrick Cates.