Rue Sainte-Anne is one of the oldest streets in the coffee warehouse and shipping district of the port city of Jacmel, Haiti. I teach film at the Cine Institute on that street, and a few weeks after January 2010 earthquake the distressed building still seemed to quake and shudder, like a boxer punished for ten rounds but still standing, held up by pride and willfulness alone.

A few doors down was a collapsed building where Danish filmmaker JØRGEN LETH (born 1937), also poet, journalist, sports commentator, and Denmark’s Honorary Consul in Haiti, had been living for many years. I’d heard that he’d survived the earthquake, or the “ga-do ga-do” as Haitians call it, speaking the phrase with a rumbling rhythm. It seemed impossible: two stories had collapsed on top of the first. The spill of rubble in the street flickered with photos and fragments, as if alive. I picked up the soggy, moldy papers: they were Jørgen’s personal letters, news articles about him, photos, postcards, screenplays, writing — a man’s life blasted out of his home by a tremblement to litter the streets in torn, fading bits. With my colleague Paula and student Zaka, I began to collect the shreds. I brought them back to my room and spread them over the bed and floor. It took a few weeks, but slowly they dried. I can’t say much about them — even at a glance, the personal nature of some of it bids one to look away. 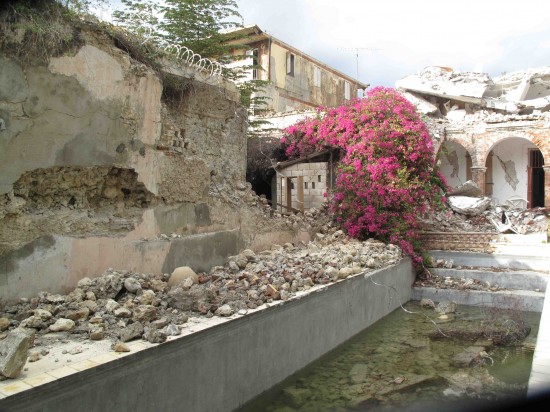 When Jørgen contacted me to ask if our school could film his home for Truls Lies, a fellow documentarian, Zaka and I went back to Rue Sainte-Anne and into the rubble. A cascading bush of brilliant pink had blossomed over the crumbling courtyard, its magenta reflection shimmering in the ruined swimming pool. Walls were gone, revealing little bedrooms with framed pictures still hanging, and a few sticks of furniture: what had been a life reduced to the qualities of a child’s dollhouse. We were met by Jørgen’s friend Jean Beleque, the man who saved him. He did a “re-enactment” for us, something I was to see many Haitians do over the next four months. When someone is asked, “where were you for the earthquake?” their arms go up into a flutter, feet begin to shuffle, and they do a little “earthquake dance,” as they call it, to show where they were and how they were buffeted about by the “big bulldozer” rumbling underneath. Jean Beleque began his earthquake dance, showing how he climbed over the rubble that had buried the staircase, crawled up and rescued a confused and terrified Jørgen from where he crouched, led him down and out to safety.

After the earthquake, Jørgen fled to the Dominican Republic. We emailed a bit as I photographed his art and sent him reports as to where it was being stored. I’d met Jørgen several times in Haiti, had meals in this home when it was a glorious space filled with the spirit of his sensual connection to Haitian women, art and vodou; and I’d seen bits of his evocative, singular films, but I didn’t really know him. His 1967 film The Perfect Human has a nature morte quality about it. The perfect man and woman dance and dress and tastefully eat their way through the tableaux of life as if preparing for embalming. Nothing touches them. As Zaka, Paula and I began, with Jørgen’s trusted and dignified housekeeper André, to pull Jørgen’s journals and artwork out of the rubble, each beautiful, dust-draped object seemed to emit a radiance: where Jørgen had found it, what it meant to him, like pulling memories out of someone else’s life, an inexplicable sensation of enigmatic familiarity.

In 2003, Lars von Trier challenged Jørgen to a cinematic duel. During his career Jørgen had devised self-imposed rules for himself, limits within which film. He inspired the Dogme 95 movement, with its semi-ironic Vow of Chastity rules, spearheaded by von Trier, who then thrust the rules back at his mentor as “obstructions.” The resulting film, The Five Obstructions, begun as something if not sinister then at least ornery, is von Trier’s desperate attempt to ruffle his perfect mentor, force him to re-make his perfect film, The Perfect Human, as an inelegant film that would leave a mark, a human mark. He fails. Five times von Trier tosses ridiculous obstructions at Jørgen and five times Jørgen bats the challenge back with a new jewel. Von Trier set out to push Jørgen’s taste and perfection, and like an aikido master, Jørgen deflected every thrust. The Five Obstructions finishes with an astonishing tenderness between the duelists. It ends as a satire of perfection, with a very human Jørgen incapable of making an inelegant film. 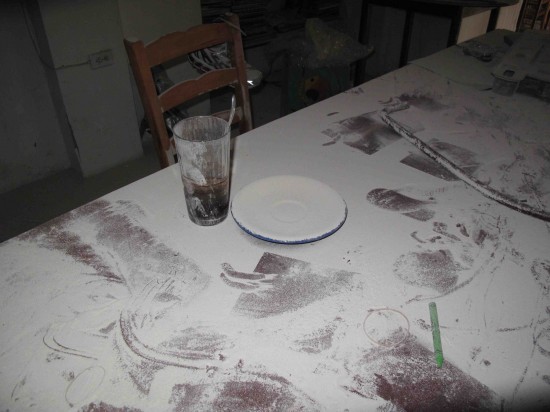 As Zaka and I filmed and photographed the devastation in Jørgen’s home, I continually found eerie little “memorial” tableaux. The last cup of tea, a cigarette in an ashtray, covered in dust. A table spread with index cards, scenes for a movie, the ink faded under a chalky blanket. A gem of a still life, or still death, I thought. Nature morte. 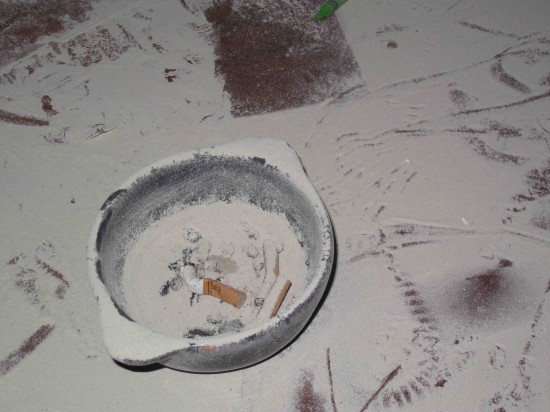 After the obstruction of an earthquake, something no artistic mastery could deflect, it seems Jørgen will not want to return to Haiti any time soon.