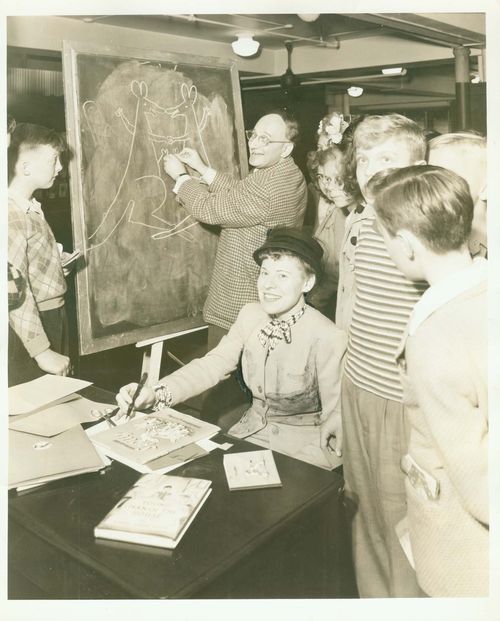 MARGRET REY (1906–1996) and her husband Hans (H.A.) fled Paris on cobbled together bicycles mere hours before the Nazis took over the city. They toured through France in this desperate fashion, sleeping in farmhouses, stables and an abandoned castle. They made it to Portugal, then Brazil and finally New York carrying the manuscript for Curious George with them the entire way. Curious George Escapes the Nazis is the most fascinating story of Margret’s life (and it does lend an extra layer of poignancy to George’s wrecked bicycle), but it’s not the thing that fascinates me about their work. And while you can draw some interesting parallels with Herge’s Tin Tin (a remnant paternal colonialism) or cluster the Reys with Dr. Seuss (Ted Geisel) and Maurice Sendak — all Jewish, childless and enthusiastically anarchic — those are not elements I dwell upon. No, what I think about when I’m reading Curious George to my daughter is Pulp Fiction. Originally Margret was not even credited for her work on George, though she was the primary writer of the stories. (This was not, however, a strict division of labor, as both Margaret and Hans wrote and drew.) She didn’t just hand a script over for Hans to illustrate; Margaret would act out the entire story for Hans to visualize, miming George as he painted the living room a jungle scene and scarpering out the window. When Tarantino directed Uma Thurman in Pulp Fiction’s dance scene he told her to model her dance on The Duchess in The Aristocats, which was itself Rotoscoped by Disney animators from a live dancer and is copied yet on dance floors today as people reference that kittypaws twist. It created a lineage of gestures, physical movements originating from one anonymous dancer to Rotoscope to animation to director to actress to us. And when I read Curious George I don’t just see a naughty monkey, but scenes from a marriage: Margret wobbling and reeling around the living room, collapsing on her back, high on ether.