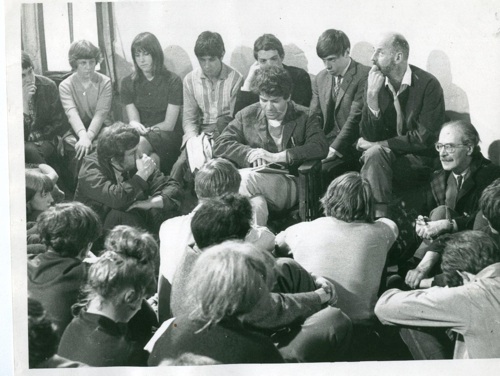 A heraldic urchin most comfortable on a street bench, it seemed as if a collection of entities communed with GREGORY CORSO (1930-2001). Corso spoke of Hope, Truth, Heraclitus, Pliny, Faith, Love, Lucretius, Diogenes as if they were his dear friends who buoyed and betrayed him. When Corso recited a mouthful of plundered memory and poesy fou, you could imagine a horde of swarthy besotted angels and devils warring for his tongue: “Know that the earth will madonna the Bomb/that in the hearts of men to come more bombs will be born /magisterial bombs wrapped in ermine all beautiful /and they’ll sit plunk on earth’s grumpy empires/ fierce with moustaches of gold” (“Bomb”)   . Corso was street- and state-raised: he turned the trauma of prison life into an education, devouring the classics. (“Too much time not enough space,” he said of prison, “what would Einstein think?”) He was writing poems when he met the university-smart beat trinity of William Burroughs, Allen Ginsberg, and Jack Kerouac. Along with Herbert Huncke and Neal Cassady, he was part of a street-savvy beat trinity who were muses to the others. He lived a grand, unwieldy life, his choices all there in his poems, such as “Marriage”: “I deny honeymoon! /running rampant into those almost climatic suites/yelling Radio belly! Cat shovel!/O I’d live in Niagara forever! in a dark cave beneath the Falls/ I’d sit there the Mad Honeymooner/devising ways to break marriages, a scourge of bigamy/a saint of divorce.” On his deathbed, he said: “This is the big one, my angel. I’m excited. Now I’ll know if I was right. Put the passage on my tongue?” He resurrected briefly for a poker game. “Death is just a rumor,” he once wrote. He won that night; the cards fell his way.