One of my hobbies is krabattophily. You haven’t heard of the word “krabattophily” because I just made it up. While browsing through my collection of outdoor mattress photos in preparation for curating a selection of them for HiLobrow, I decided that my strange interest deserved its own coinage.  Ten minutes ago, I was a humble mattress photographer; now, after cobbling together a Greek stem and a Greek root, I am a proud krabattophile.

Before I moved to Los Angeles, I lived in London for over three decades. And it was only in my last few months there that I noticed my first discarded mattress. Crawling its way to the gutter from a doorway in hedonistic Shoreditch, and surrounded by the morning-after detritus of drunkenly dropped fast food, this quasi-tartan beast demanded some photographic attention without explaining exactly why. I obliged. 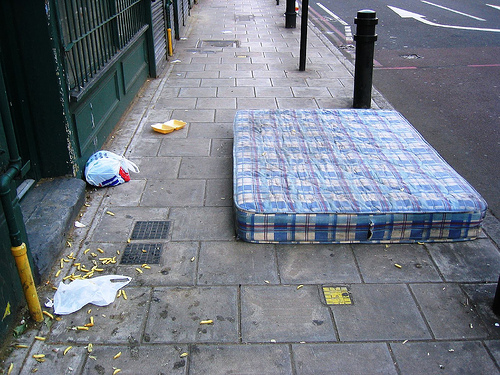 I didn’t have cause to think about outdoor mattresses again until several months later, when I stumbled across an unsettling tableau alongside the LA River. Mickey declares his love for Minnie. She is touched and flattered. And yet she has no idea that Mickey intends to drag her into his shady sex den for the purposes of extensive animated sin. 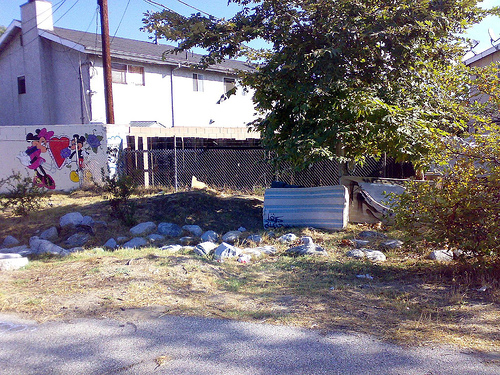 The salience of this scene was enough to jolt me into mattress awareness. From then on I began to see them all over the city. Los Angeles became, for me, Los Colchones. 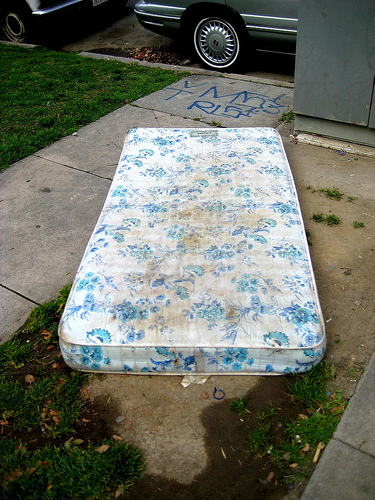 So what is the appeal of a flat cuboidal amalgam of springs and stuffing that someone else has deemed worthless enough to discard? In some cases, my appreciation is purely aesthetic. An abandoned mattress can be regarded as a three-dimensional graffito that injects formal and chromatic variation into an otherwise sprawlingly boring landscape. 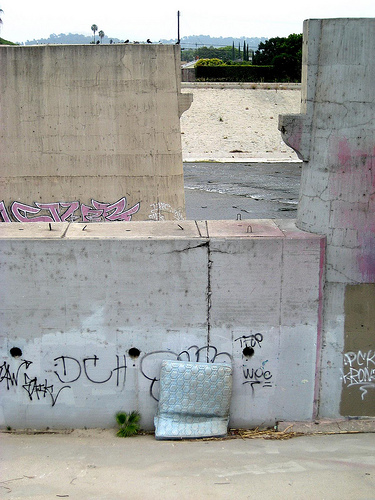 In other cases, mattresses seem to exist as curious punctuation marks that draw attention to the lives and stories of people behind closed doors. What happened to the twins at number 463? Did they die? Did they develop simultaneous lumbar complaints? Or did they just grow out of space travel as a bedroom theme? 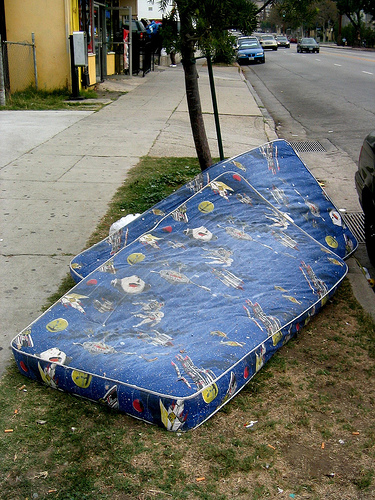 And then there is mattress-as-barometer-of-urban-decay. 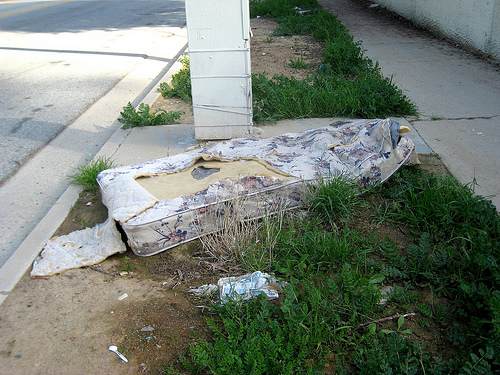 Over time, I added periodic sightings to my cocooned collection until it was big enough to burst out into the world as a butterfly. Soon enough, other krabbatophiles crawled out through the fine mesh like bedbugs, the number of exhibits swelled and the opportunity of curating a small selection for the HiLobrow readership presented itself. 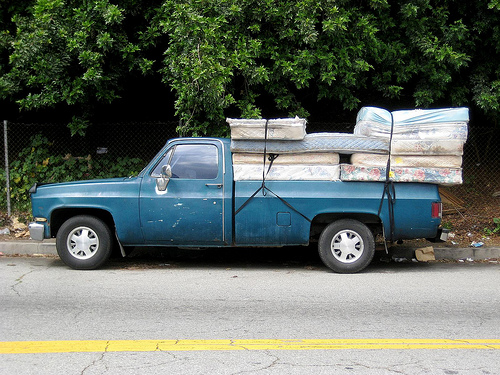 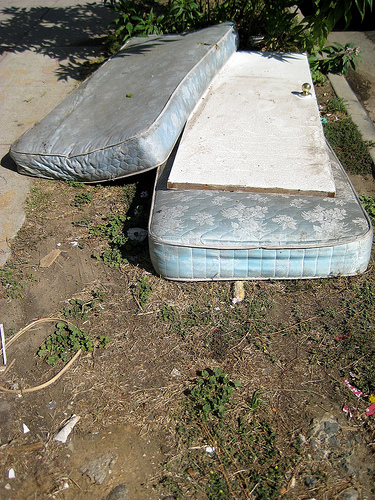 A Hill To Climb

A glacial, somersaulting escape from the mattress-catcher in his Toyota pickup. A supportive onlooker shout-whispers: “Head for the trees!” 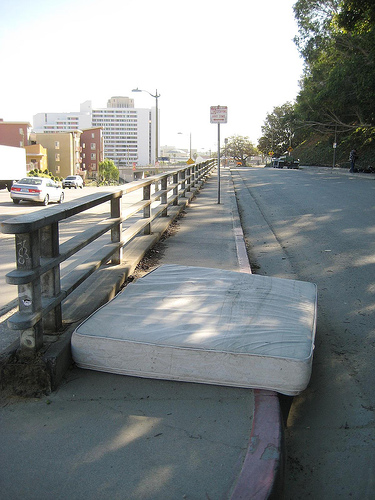 What savage creature stomps and roars through the South Central grid? Claws drenched in subterranean tar, teeth itching for the spongy give of flesh, this genetic anomaly eviscerates anything in its path that smells human. 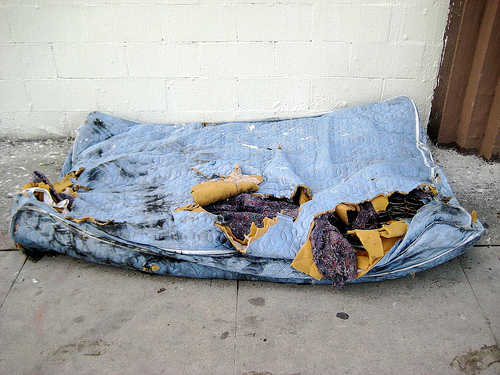 A sibling hand-me-down repaired and repaired until replacement beckoned. 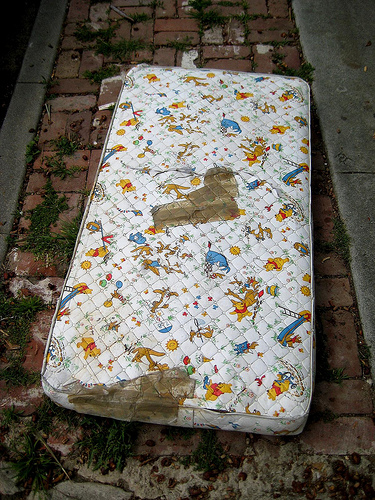 A Tribute to Louise Bourgeois

An abandoned lover wraps herself with a blanket in an act of post-coital shame. 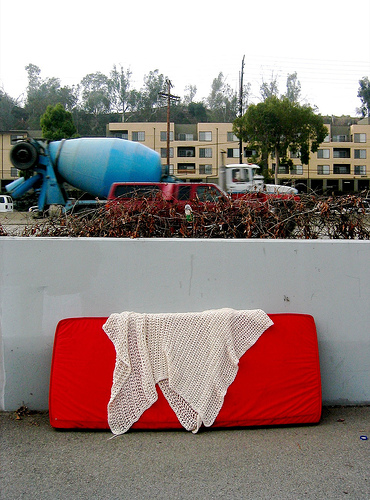 The makeshift camp of an absent nomad. He likes milk. He reads the paper to help him get to sleep. His posters advertise his pain. 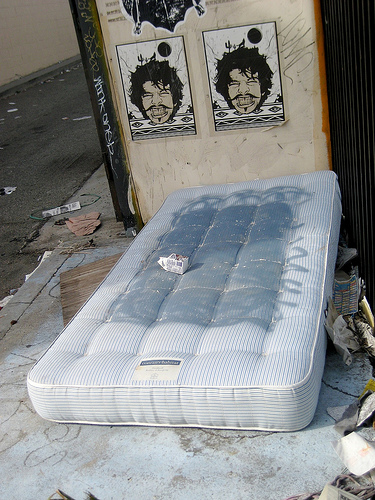 A triptych of colour clash and pattern mismatch that engages the eye and then torments it. 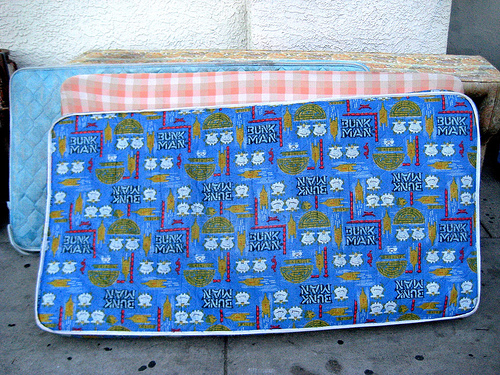 The End of the Cretaceous Era

The rubbish will submerge the plain and the dinosaurs will become fossils. 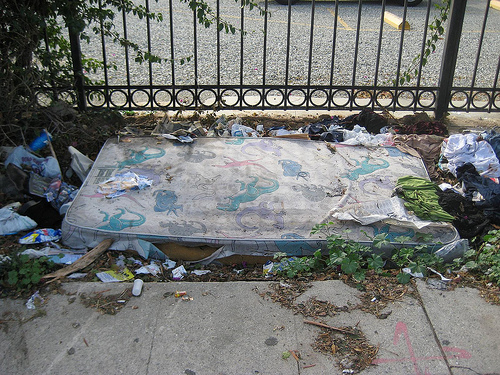 The detainee looks out longingly at life on the other side. He thinks for hours at a time about the “free” in freeway. 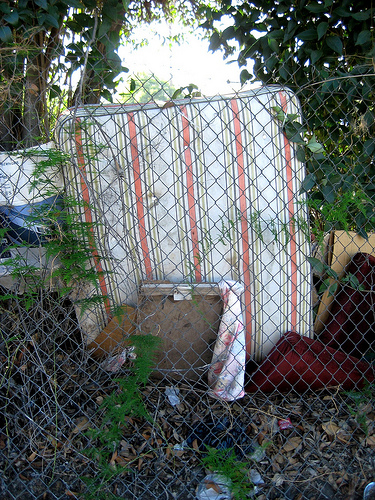 The jolie-laide aftermath of an electrical house fire. 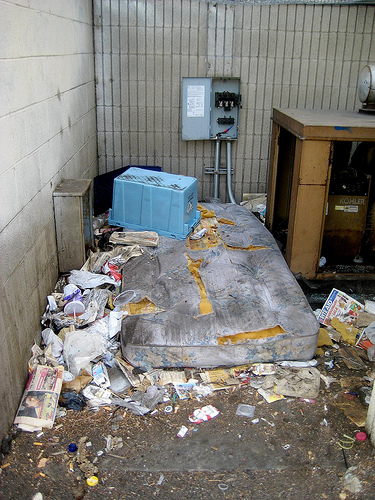 Is that a swastika in the Sid Vicious vein? The padded punk sticks two fingers up at the traffic warden: “Fuck off. I’m parking here and there’s nothing you can do about it.” 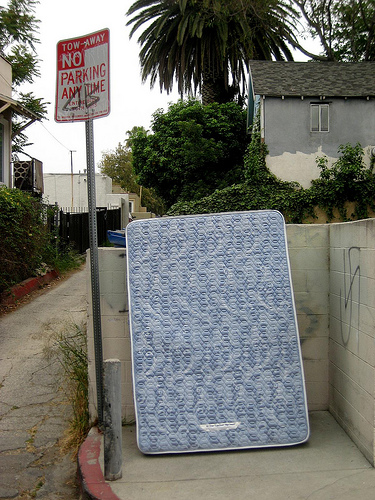 Brimming with krabbatophilic enthusiasm after this brief tour, you might find yourself suddenly much more aware of mattresses as you walk, run, cycle and drive through your neighbourhood. If you see a discarded mattress that interests you, please photograph it, upload it to Flickr and submit it to the Outdoor Mattresses pool. And if you want to discuss the exegetic possibilities of your photo with fellow Hilobrovians, consider posting a link to it in the comments section at the end of this post.

HiLobrow.com is pleased to announce that Patrick Cates, whose post-Abu Ghraib “Doing A Lynddie” game was a viral phenomenon, has been appointed the site’s Magister Ludi. Every week, he’ll invite HiLobrow readers to come out to play.