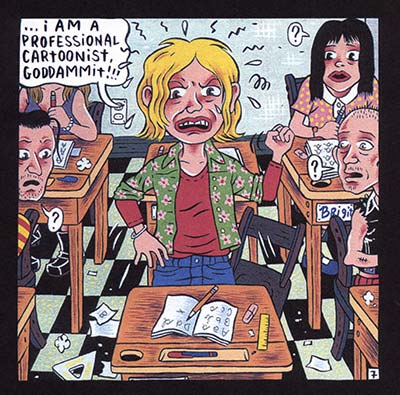 There’s no point being dainty about it; Dirty Plotte means dirty cunt. Which evokes the blunt pleasure of JULIE DOUCET’s (born 1965) most famous work, but undersells its artistry and gleeful humor. Her cartoon “If I Were a Man” sported the unforgettable image of her pulling back the reins on her proud flesh (charmingly named “Mustang”). Her drawing style manages the neat trick of appearing loose where it’s carefully composed, naive though it’s arty as hell, and spontaneous despite a rich, labor intensive technique. Long before PJ Harvey sang “Sheela Na Gig,” Julie Doucet was that mad, grinning, cunt-pulling figure, spilling used tampons out of her plotte. I’ll resist the impulse to ghettoize Doucet with other autobiographical women cartoonists; there are more fascinating distinctions than commonalities in the work of Dori Seda, Ariel Schrag, Aline Kominsky-Crumb, Alison Bechdel, Lynda Barry, Jessica Abel, and Phoebe Gloeckner. But it is worth noting that, like many women cartoonists, Doucet comes from a fine arts education and has never been at ease in the limiting, fanboy comics culture. So even though she’s one of the few cartoonists ever who can go Id to Id with R. Crumb, nowadays she brings her formidable technique and raw blasts of happy, jagged psyche to linocuts, collage, and sculpture instead of comics. No matter what media she works in, though, she brings all the virtues of her monstrous funk.