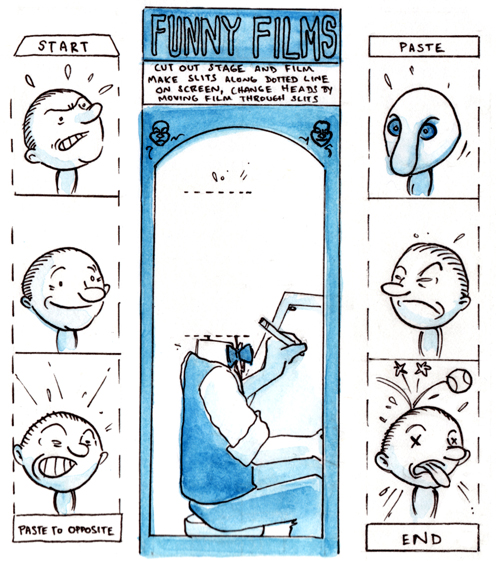 The only diploma that E.C. SEGAR (1884-1938) ever earned was from a correspondence cartooning class; but he was every bit as dedicated to his profession as Popeye, his most famous creation, was to roaming the high seas. (Popeye’s first words: “Ja’ think I’m a cowboy?”) Back when newspapers used to allot entire pages to their top cartoonists, Segar filled his not only with Thimble Theater, the strip (launched in 1919) in which Popeye first appeared as a minor character, but with his ferociously imaginative (and better) science-meets-home life series, Sappo. In the corners of every page: a paper construction game, a puzzle or riddle, or drawing lessons. Segar’s genius was his breadth of content — something for the kids, as well as in-jokes for the adults in the audience — and that is echoed by his simple yet savvy line work. The endless black of the topcoats and infinite horizons (indicated by a single shaky line) press against the edges of the newsprint like the microcosmic reality inside a snowglobe.

Each day, HILOBROW pays tribute to one of our favorite high-, low-, no-, or hilobrow heroes on that person’s birthday. Also born this date: Diego Rivera and Jimmy Smith.