This item is excerpted from yesterday’s essay on the New Gods Generation.

The 1914-23 generation came of age during the Depression, during which time they were kept busy by the Civilian Conservation Corps “getting things done, building things that worked, things that have lasted to this day,” as Strauss and Howe admiringly put it. The Tennessee Valley Authority was the handiwork of youthful New Gods. As adults, the 1914-23 generation fought World War II. After the war, they saved American industry, tamed the business cycle, built the suburbs and moved into them. Or so we hear, again and again, in middlebrow paeans to the cohort that shored up the gains of older (Hardboiled) middlebrows. How did Middlebrow inspire a generation to to say in harness so long, and accomplish so much? What persuasive ideology helped prevent the New Gods from kicking against the pricks?

One such ideology, it seems to me, was machismo. The New Gods venerated the macho man, and some deluded anti-middlebrows even hailed him as an antiheroic savior of sorts. This generation produced only one president, but it was the macho JFK, who brought the “best and the brightest” into the White House, faced down the Soviet Union, and put a man on the moon. Astronauts Alan Shepard and John Glenn are members of this generation; so is faster-than-sound test pilot Chuck Yeager.

Even the women of the New Gods generation were macho: films and posters featuring “Rosie the Riveter” encouraged women to go to work in support of the war effort. Behold arch-middlebrow Norman Rockwell’s vision of Rosie: 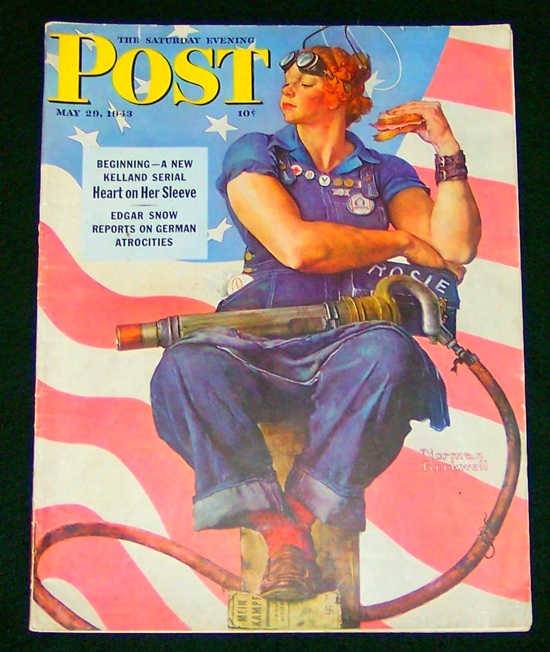 Speaking of Mailer and JFK, in 1960 the former wrote an overheated Esquire essay about the latter titled “Superman Comes to the Supermarket.” America, Mailer claimed, was the land where people still believed in heroes — and it needed a macho hero to rescue it from the triumph of Middlebrow during the Fifties (1954-63).

The film studios threw up their searchlights as the frontier was finally sealed, and the romantic possibilities of the old conquest of land turned into a vertical myth, trapped within the skull, of a new kind of heroic life, each choosing his own archetype of a neo-renaissance man, be it Barrymore, Cagney, Flynn, Bogart, Brando or Sinatra, but it was almost as if there were no peace unless one could fight well, kill well (if always with honor), love well and love many, be cool, be daring, be dashing, be wild, be wily, be resourceful, be a brave gun. And this myth, that each of us was born to be free, to wander, to have adventure and to grow on the waves of the violent, the perfumed, and the unexpected, had a force which could not be tamed no matter how the nation’s regulators — politicians, medicos, policemen, professors, priests, rabbis, ministers, idèologues, psychoanalysts, builders, executives and endless communicators — would brick-in the modern life with hygiene upon sanity, and middle-brow homily over platitude; the myth would not die. 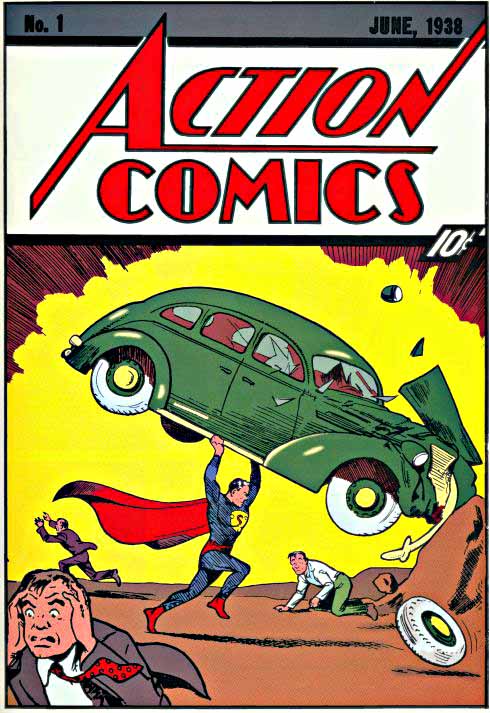 During the Thirties and Forties, superman really did come to the supermarket, as the New Gods ushered in what we’ve been encouraged to regard as the Golden Age of superhero comics. Beginning in 1938 with the debut of Jerry Siegel and Joe Shuster’s Superman in DC’s Action Comics # 1, the comic book made its debut as a mainstream art form. Comic-book authors, artists, and editors born between 1914 and 1923 include the likes of Bob Kane and Bill Finger, Julius Schwartz, Will Eisner, Bill Everett, Carl Burgos, Sheldon Mayer, and honorary New God Joe Simon — who invented and refined comic-book superheroes as we know them: Superman and Batman, Captain America, The Spirit, Namor the Sub-Mariner, Daredevil, The Human Torch, Flash, Green Lantern, Hawkman, and the Justice Society of America. Enjoyable stuff! But with the exception of Jack Cole’s Plastic Man, it’s middlebrow.

Of course, there were New God cartoonists who weren’t middlebrow. Will Elder, John Severin, Dave Berg, Al Jaffee, and former EC Comics publisher William Gaines, for example, brought us Mad Magazine (whose successful formula, I think, is due to the fact that half of its staff were New Gods and half were Postmodernists; more on that some other time). Charles M. Schulz wasn’t a middlebrow, exactly, though Middlebrow would enthusiastically embrace and champion his work. In the late Fifties (beginning in ’61, to be precise), New Gods Stan Lee and Jack “King” Kirby would give us the Fantastic Four, the X-Men, Thor, the Incredible Hulk, Iron Man, the Silver Surfer, Doctor Doom, Galactus, The Watcher, Magneto, the Inhumans, and many more comic-book superheroes who were neither macho nor middlebrow — at least, they weren’t in their earliest incarnations.