OUR READERS already know that HILOBROW has a problem with — in fact, an animus against — quatsch. As of today, we’re going to start fighting back against its reign of terror.

Building on my own mid-’90s research into the mainstreaming of camp, kitsch, and cheese, and perhaps also on Michael Hirschorn’s 2007 anti-quirk manifesto, the fledgling cultural critic Sharon Steel has defined quatsch as “a coy combination of quirk (various cultural productions considered cute and fun despite their damaged, lame quality, à la not only the movie Napoleon Dynamite, but also the ‘Vote for Pedro’ T-shirt phenomenon it spawned), kitsch (ironically appreciated found art, such as pink lawn flamingos and velvet Elvis paintings), cheese (Wayne’s World and Chicken Soup for the Soul), camp (Susan Sontag described it as the cultural elite’s brilliant excuse to enjoy and love the low-brow), and cuteness.” A toxic admixture! 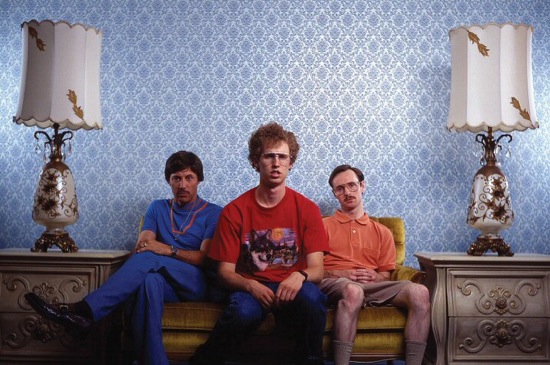 For Hirschorn, “the gentle ministrations of public radio’s This American Life; the strenuously odd (and now canceled) TV sitcom Arrested Development; the movies of Wes Anderson; Dave Eggers’s McSweeney’s Web site; the performance art, music, and writing of Miranda July; and the just-too-wacky-to-be-fully-believable memoirs of Augusten Burroughs” are prime examples of “contemporary quirk,” which he defines as “beneficent, wide-eyed gazing upon the oddities of our fellow man” — and also “a self-satisfied pose that stands for nothing and doesn’t require you to take creative responsibility.” Steel, too, points to McSweeney’s (which she calls McTweeney’s) and Miranda July; she also identifies Chuck Klosterman, the magazine FOUND, and Diablo Cody as avatars of a sensibility informing both the creation and reception of cultural productions that are “offbeat, but just so; eccentric, but not too; awkward, but self-aware; quirky, but formulaic in their quirkiness.” In a word: quatsch.

Back in 1997, I criticized Eggers’s pre-McSweeney’s projects (Might Magazine, the Might collection For The Love of Cheese), and wrote that “people who enjoy kitsch (cultural products intended to be high quality, but seriously flawed in conception or taste) in a naive, relatively straightforward way may be out of it, but they are still to be sympathized with as fellow human beings who at least have not lost the capacity to feel. People who pretend to enjoy kitsch as part of some lame ‘anti-hip’ put-on are, on the other hand, to be pitied and even despised.” Translating this into HiLobrow.com terminology, the former is a lowbrow sensibility, and therefore worthy of respect — as is the highbrow sensibility, which dismisses kitsch as unworthy of a second glance. The latter sensibility — that of the anti-hip hipster — is a hallmark of what HILOBROW calls “nobrow.” The nobrow and hilobrow sensibilities are both unheimlich, and therefore difficult for the uninitiated to distinguish from one another. Although this doesn’t let Eggers off the hook, perhaps it’s no wonder that we’re so caustic whenever an opportunity to criticize a nobrow comes along.

However, the real target of HiLobrow.com’s animus isn’t nobrow, but the middlebrow sensibility. Middlebrow isn’t unheimlich, it’s gemütlich. With its invisible hand, Middlebrow is forever sanding the rough edges off the eccentric, the quirky, and the weird until it’s been domesticated, defanged, mainstreamed… quatschified. (In economic terms, Middlebrow commoditizes; it renders everything fungible.) How did the Chris Ware who gave us the brilliant, kaleidoscopic, slapstick Quimby Mouse comics become the Chris Ware who decorates New Yorker covers (and McSweeney’s San Francisco HQ)? How did the John Waters who inflicted Pink Flamingos and Polyester on a horrified public turn into the director of Hairspray? How did the unbearably damaged Bill Murray of Rushmore become the bearably, endearingly damaged Bill Murray of Lost in Translation, The Life Aquatic with Steve Zissou, and Broken Flowers? The answer: Quatsch, the latest and greatest tool at Middlebrow’s disposal. 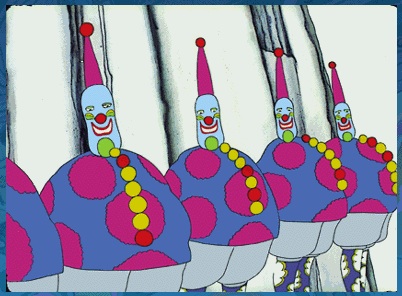 Here’s a quirky, kitschy, cutesy metaphor for you, readers. If the Blue Meanies of Yellow Submarine represent the forces of Middlebrow, then quatsch is the O-blue-terator: an unseen WMD capable of transforming everything that’s different into more of the same. (As the Chief Meanie puts it, “Let us not forget that Heaven is blue… tomorrow the world!”) Here at HILOBROW, we’ve declared war on Middlebrow — and one of our objectives is disabling its most effective weapon. This irregular series of posts, “Quatschwatch,” aims to do just that.

The above introduction is a long one, so we’ll just mention three recent examples of quatsch that have come to our attention. 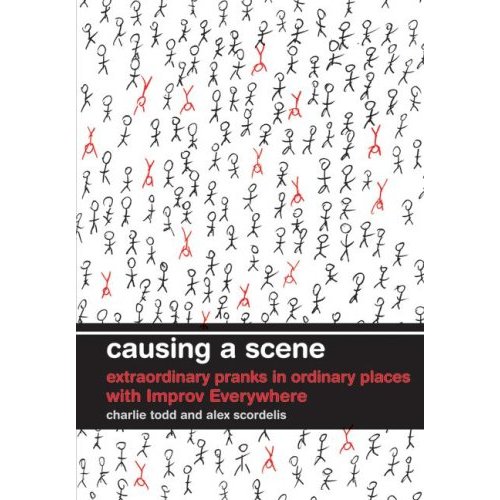 1) Book: Causing a Scene: Extraordinary Pranks in Ordinary Places with Improv Everywhere is a newly published book chronicling the hijinks of a New York-based comedic performance art group dedicated to causing “scenes of chaos and joy in public places.” HiLobrow.com applauds pranks and pranksters, tricks and tricksters, Billionaires for Bush and Reverend Billy; the RE/Search book Pranks! belongs in every hilobrow’s library. But Improv Everywhere — which has given us the annual No-Pants Ride on New York’s subway system, and Ted’s Birthday, a This American Life-covered put-on in which a fake birthday party was thrown for a random person at a New York bar — is cheesy. (Just look at the neither particularly shocked nor particularly amused expressions on the faces of the subway riders in the 2009 No-Pants Ride video. Middlebrows delight in cheese; everyone else just puts up with it.) PS: Would you call us crazy if we suggested that the very notion of the harmless, laughing-up-your-sleeve, good-way-to-meet-girls put-on was introduced to the American counterculture by CIA moles worried about the effectiveness of Yippie pranks?

2) News Story: Quirky Mini-Golf Course Set Up In Brooklyn Loft. A bunch of Brooklyn artists created a mini-golf course out of upcycled materials, in order to showcase their work. Nothing particularly kooky or quirky about that — sounds pretty fun, to us. But it made middlebrow journalists anxious, apparently. Hence the use of the term “quirky.” And just listen to the middlebrow emphasis that one New York newscaster puts on the word unique.

3. Radio Program: Robert Laughlin, a Nobel Prize-winning physicist at Stanford, was interviewed on the May 29 episode of the Public Radio International show “To the Best of Our Knowledge.” (Interview starts around 14:10.) Laughlin was invited to share his hard-won insights about the “personalities” of the various scientific disciplines; in doing so, he was having fun, but not doing a comedy shtick. This is a gray area in which middlebrow journalists in every medium do not enjoy finding themselves. So they quatschify. Listen carefully as show host Jim Fleming says, “Laughlin has a … rather quirky view of his fellow physicists.” An entire treatise could be written about the fraught pause that Fleming injects between the article and the adjectives in that sentence, and a second treatise about the particular emphasis that he places on the word “quirky.” PS: During the interview itself, it’s important to note that Laughlin’s interlocutor uses the word “oddball,” though Laughlin himself prefers the un-pejorative term “eccentric.”

First in an occasional series.