in a 1949 Harper’s Magazine essay [subscribers only] titled “Highbrow, Lowbrow, Middlebrow.” Illustration by Saul Steinberg, below. 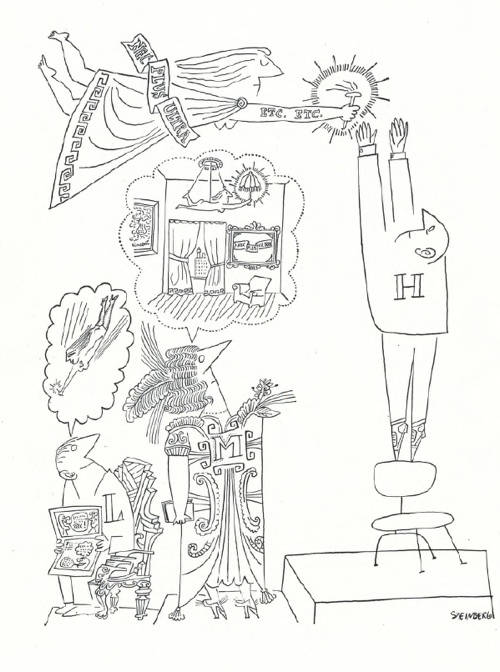 Lynes, who was an editor at Harper’s at the time, claims to be anti-snobbery, which is fine. But he’s also anti-intellectual:

Our heroes now are not the Carnegies or the Morgans but the intellectuals — the atomic scientists, the cultural historians, the writers, the commentators, the thinkers of global thoughts who, we assume for lack of another faith, know better than anyone else how we should cope with what we call with new resonance our national destiny. What we want are oracles, and the best substitutes we can find are the intellectuals…. What we are headed for is a sort of social structure in which the highbrows are the elite, the middlebrows are the bourgeoisie, and the lowbrows are hoi polloi.

Having launched this dubious metaphor — in which America is not a republic but a crypto-aristocracy run by affected, effeminate, out-of-it, not-as-clever-as-they-think highbrows who manipulate the lumpen lowbrows — Lynes goes so far as to suggest that the virtuous, value-creating middlebrows are liberal capitalism’s only bulwark against these frauds. Which is why highbrows despise them.

Writing an article in 1949 that compares one group of Americans to Nazis, and another to their Jewish victims, strikes us as extraordinary. There’s more:

The fact that nowadays everyone has access to culture through schools and colleges, through the press, radio, and museums, disturbs [the highbrow] deeply; for it tends to blur the distinctions between those who are serious and those who are frivolous…. Such an elite would like to see the middlebrow eliminated, for it regards him as the undesirable element in our, and anybody else’s, culture.

The highbrows would like, of course, to eliminate the middlebrows and devise a society that would approximate an intellectual feudal system in which the lowbrows do the work and create folk arts, and the highbrows do the thinking and create fine arts. All middlebrows, presumably, would have their radios taken away, be suspended from society until they had agreed to give up their subscriptions to the Book-of-the-Month, turned their color reproductions over to a Commission for the Dissolution of Middlebrow Taste, and renounced their affiliation with all educational and other cultural institutions whatsoever. They would be taxed for the support of all writers, artists, musicians, critics, and critics-of-criticism whose production could be certified “serious” — said writers, artists, musicians, and critics to be selected by representatives of qualified magazines with circulations of not more than five thousand copies. Middlebrows, both upper and lower, who persisted in ‘devaluating the precious, infecting the healthy, corrupting the honest, and stultifying the wise’ would be disposed of forthwith.

Lynes, whose satirical tone made his argument impervious to criticism (“I was just kidding!”), was obviously on the CIA’s cultural-Cold-War payroll. In this Harper’s essay we see the rhetoric of the dominant discourse (which seeks to make the established state of things — i.e., liberal capitalism — seem permanent, natural, and inevitable) operating at its most effective. An impressive performance!