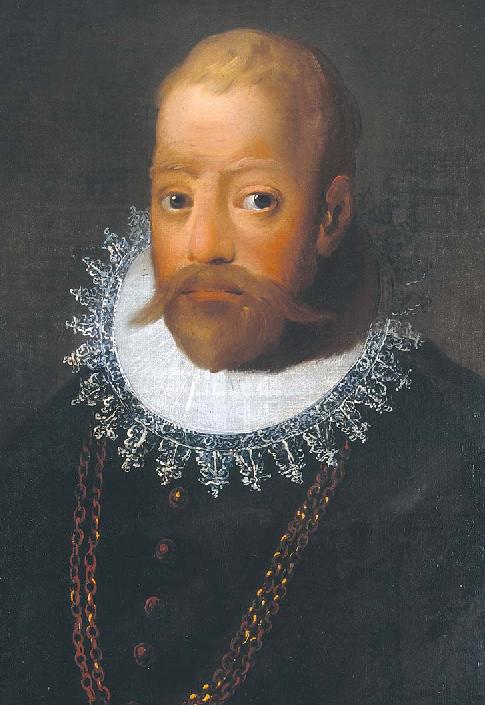 No more was expected of Danish aristocrat TYCHO BRAHE (Tyge Ottesen Brahe, 1546–1601) than the usual pursuits of the medieval 1%: hunting with occasional warfare. Kidnapped by a childless uncle, he studied Latin and the law, to the disapproval of the rest of his family. But alongside a healthy appreciation for earthly pleasures, Brahe’s passion sought out heavenly bodies – he observed the night sky with greater precision than anyone before, his achievements all the more remarkable for being made before the invention of the telescope. A duel (over mathematics!) cost him his nose, but slowed him down not a bit: he had a prosthetic made, of silver and gold, and never traveled without his box of adhesive. Granted his own island by the Danish king, he built Uraniborg, a world-class observatory/fortress over which he presided none too benevolently. Eventually decamping, Brahe ended up in Prague, where the invitation of Rudolf II allowed him to continue on in even grander style, and where prickly fellow astronomer Johannes Kepler was drawn into his orbit. Brahe and Kepler both recognized that the key to testing the latter’s radical theories of planetary motion lay in the former’s meticulously gathered data; but Brahe only allowed Kepler intermittent access. They collaborated and struggled as only frenemies can, until the fateful evening when Brahe hosted a too-lengthy dinner party. Brahe died suddenly after the feast; theories range from a burst bladder due to excess politeness, to mercury poisoning by Kepler or other persons of interest. Twenty-first century analysis of Brahe’s exhumed hair and bones revealed elevated levels of mercury, although final results proved inconclusive. Brahe’s own celestial theory favored the geo-heliocentric, an unwieldy compromise that attempted to bridge the gap between religion and observation; but his data pointed ultimately to a more radical solution. In the end, the music of the spheres turned out to be less harmonious, and more elliptical, than was dreamt of by any Danish prince.

On his or her birthday, HiLobrow irregularly pays tribute to one of our high-, low-, no-, or hilobrow heroes. Also born this date: Jack Cole, Shirley Jackson, and Lester Bangs.