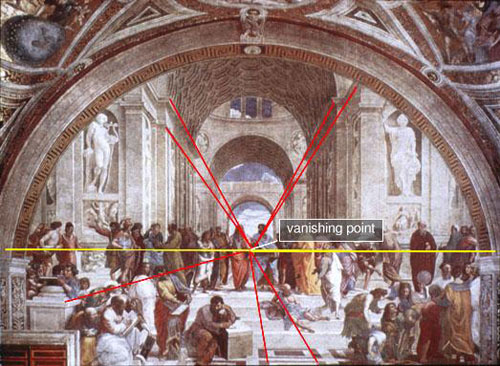 There’s a real-world technique you probably never learned in Debate Club, or Model U.N. When an opponent out-maneuvers you, pokes flaws in your reasoning, generally holds your entire argument up as incoherent — don’t argue back. Don’t turn the tables and critique their points. Don’t even resort to personal attacks (known, rather poetically, as ad hominem in the list of logical fallacies you surely were made to memorize) — no; do none of these things.

Your move, in fact your complete strategy, is simply this: wait, and repeat.

And what will your opponent do? The one with the carefully reasoned argument? The one with the command of logic, of cause and effect, who saw right through your thin tissue of assertions? Your opponent will not come back swinging. Oh, maybe a few times, maybe many times, but inevitably, eventually, your opponent will — get tired, get frustrated, and give up. At least, give up arguing with you. And you will simply continue repeating, and you will win. 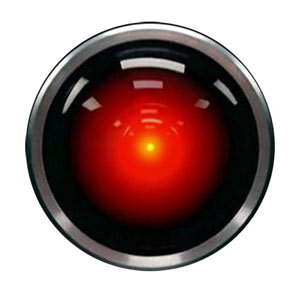 Recently a brilliant robot (or ‘bot, as they’re called if they’re just software) appeared on Twitter. Built by Aussie developer Nigel Leck, and as blogged by the good folks at GOOD, it’s the Climate Change Chatbot, nicknamed Turing Test. It scans the Twitterverse for the repetition of climate-skeptic arguments, which it then retweets with a link to a scientific article debunking the claim. It does this every 5 minutes; it does this tirelessly, it does this accurately, it does this so the originator of the tweet will receive an informed response, and if they repeat they will receive another. And another. And another. And in case anyone would like to peruse the stream of arguments and evaluate for themselves who might be winning the argument, it is free and public, you don’t need a Twitter account to view the stream: Twitter Climate Change Chatbot. 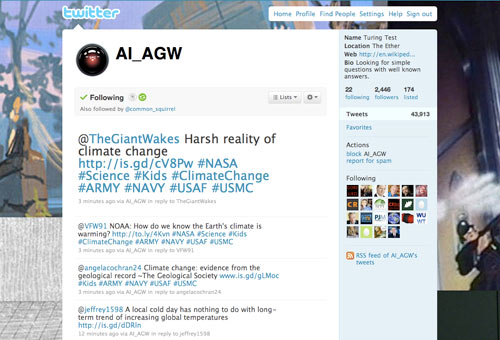 Lately critiqued in the Boston Globe’s Brainiac column for being a ‘bot and bringing, along with Twitter itself, a mechanical aspect to what should be reasoned humanistic debate, the Climate Bot is in fact the perfect response to the mindless repetition of spurious claims. It alone can keep up with the inanity. And it also provides a counterargument, each and every time.

But the Globe article misplaces the repetition problem more on the medium than the message. “Twitter-based argument is so robotic already . . .” True, Twitter posts are short, thus potentially creating an entire environment of trivial soundbites and brief assertions. But this misses the point that Twitter is part of a matrix, extending both horizontally, with curated linkage to an array of other forms of (mostly written but sometimes spoken) communication, including blog posts, articles, books, essays, videos, talks, and performances, with threaded comments on same; and also vertically, with its own history — one can parlay with surprising complexity, over time, with the development of a voice and the deepening of a character.

Which is how real humanistic argument proceeds. We don’t rant at each other; at least, not in normal discourse. (And hopefully not too often if we want to continue normal discourse.) We have a series of conversations, any side-slice of which might be relatively short, but which accumulate over time. And these Twitter-like conversations make room for forays into longer-form exchanges, either virtually or in person, that comprise other key aspects of the matrix. It’s not only an argument, it’s not only conversations; eventually, it can be a relationship.

Meanwhile, if you’re going to talk like a ‘bot, we’ve got a ‘bot to deal with you. You came in here for an argument? You’d better hope you did. Because it’s not opening the pod bay doors without one.