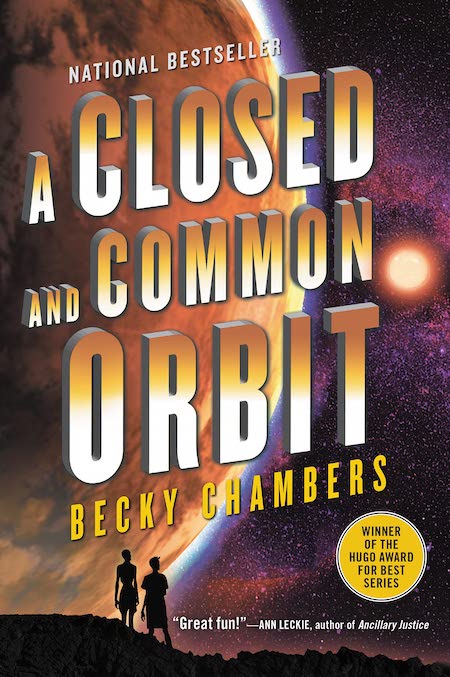 The sequel to The Long Way to a Small, Angry Planet (2015) begins in the immediate aftermath of Chambers’s first novel. Lovelace (“Lovey”), the starship Wayfarer‘s sentient onboard computer, has loaded herself into an illegal android “puppet” body (her “kit,” she finds, doesn’t feel right to her), and heads out to pursue an independent existence. Sidra (the new name Lovey chooses) is accompanied by Pa fellow outlaw: Pepper, a genius mechanic — a minor character from the previous book. A parallel narrative strand explores the early years in the life of Jane #23, a genetically modified child slave who is part of a system — a factory overseen by robots — that she doesn’t know exists. The narrative is also moved along by posts to underground message boards. As with Gordon Dahlquist’s The Different Girl (2013), this is among other things a novel about education and acculturation — Pepper essentially becomes mother to a person with a brilliant mind but a child’s limited understanding of the world. Will Sidra successfully integrate into a planet’s culture, and adapt to her “kit”? What Ever happened to Baby Jane #23? A lovely adventure.

Fun facts: Other installments in the Wayfarers series, which won the Hugo Award for Best Series in 2019: Record of a Spaceborn Few (2018) and The Galaxy, and the Ground Within (2021). “Very few of us actually have a nemesis!” Chambers has said in an interview, explaining why A Closed and Common Orbit doesn’t have any villains. “Most of us are just struggling against social constructs and we never get to see the faces behind those constructs, often because those things have been built over a long period of time.”