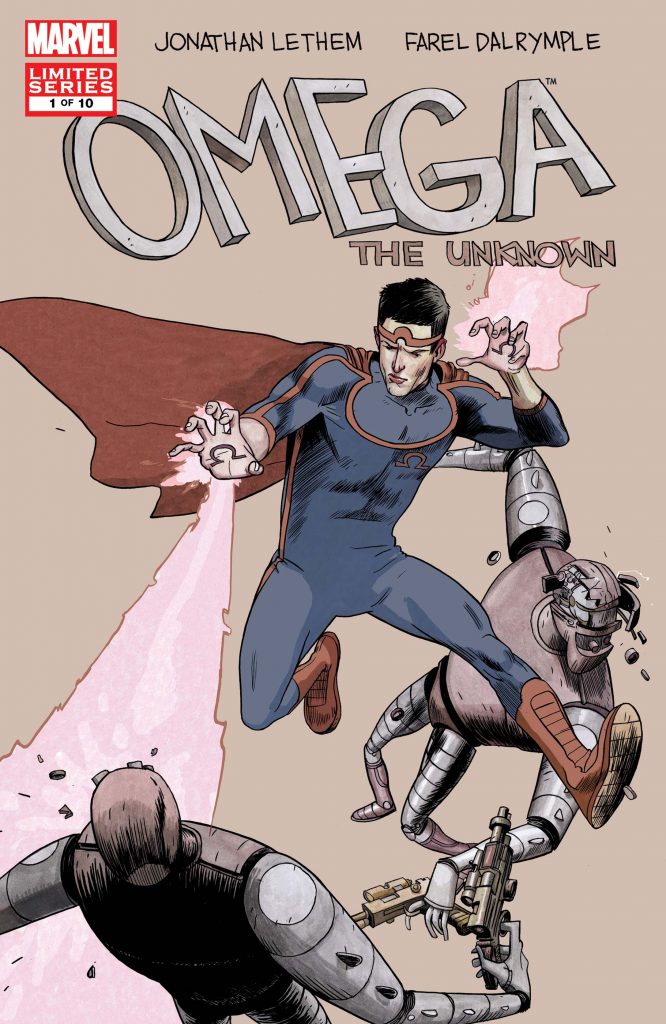 Omega the Unknown was a 1976–1977 Marvel comic — w. Steve Gerber (Howard the Duck) and Mary Skrenes, ill. Jim Mooney — about James-Michael, a 12-year-old boy who discovers that his parents are robots. He is rescued from alien mechanical beings by Omega, a silent superhero about whom he regularly dreams. Unusual in its oneiric plot and emphasis on the unusually analytical adolescent, the first issue of the never-completed series became a cult classic… rating a pithy mention, for example, in Jonathan Lethem’s 2003 semi-autobiographical novel The Fortress of Solitude. Lethem, who was himself 12 when Omega the Unknown first appeared, would end up revamping the series in this 10-issue series illustrated by Farel Dalrymple. Here, the tactiturn Omega combats galaxy-spanning epidemic of nano-robots; and young Alexander is attacked by macro-scale robot warriors programmed to hunt down and kill members of Omega’s order of heroes. The Mink, a nominal superhero more concerned with self-promotion than actual heroics, provides comic relief; he reminds this reader of a Canadian villain from Howard the Duck known as Le Beaver. Bright and awkward, Alex must find a new home, a new school, and new friends… and figure out his role in helping Omega save the world. Dalrymple’s artwork, which as ever manages to be both action-packed and somehow awkward and self-conscious, is perfectly suited for Lethem’s themes here.

Fun facts: There’s a terrific guest-art appearance by the iconic RAW contributor Gary Panter, while Paul Hornschemeier, another indie comics favorite of mine, provides the coloring for the series.