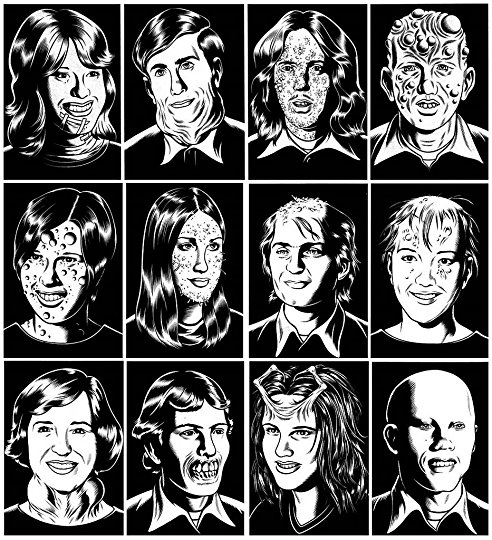 I became aware of Charles Burns in the mid-1980s, thanks to his retro-sci-fi/horror “El Borbah” and “Big Baby” stories, which at the level of form may have paid tribute to the stylings of Will Elder, Hergé, and Chester Gould — but which were more sophisticated, in a surrealist, absurdist way. I was 28 when Kitchen Sink (Fantagraphics took over, later) began publishing the twelve installments that would make up Black Hole; I was 38 by the time the complete version was published. I mention this because my take on the story changed, during those years. A sexually transmitted disease mutates teenagers — over the course of a summer, in a suburb of Seattle, in the mid-1970s — into B-movie-esque monsters! The lucky ones are those who merely grow a little tail, or sprout chest-tendrils, or who shed their skin! Within this milieu, a lover’s triangle develops among Chris, Rob, and Keith; Keith, meanwhile, falls under the erotic spell of Eliza, a free-spirited artist living with dope dealers! Chris runs away, to live in the woods near her fellow freaks; but someone is killing them! When early issues of Black Hole appeared, I reveled in what I understood to be Burns’s nihilistic, body-horror take on, say, Dazed and Confused. However, by the time the last installment appeared, I looked forward not to finding out what happened next (for better or worse, it’s essentially a midcentury-style romance comic) so much as reimmersing myself in Burns’s fully realized world — gorgeous chiaroscuro, discontinuous chronology, teenage angst, sexual frustration and liberation… plus David Bowie’s Diamond Dogs. Wow!

Fun facts: “There are certain truths that exist in genre fiction, even though it’s full of stereotypes and two-dimensional characters,” Burns said in an interview, once. “There’s a certain amount of unconsciousness that goes into genre fiction or genre movies. And out of that unconsciousness, I always see a certain kind of truth.”