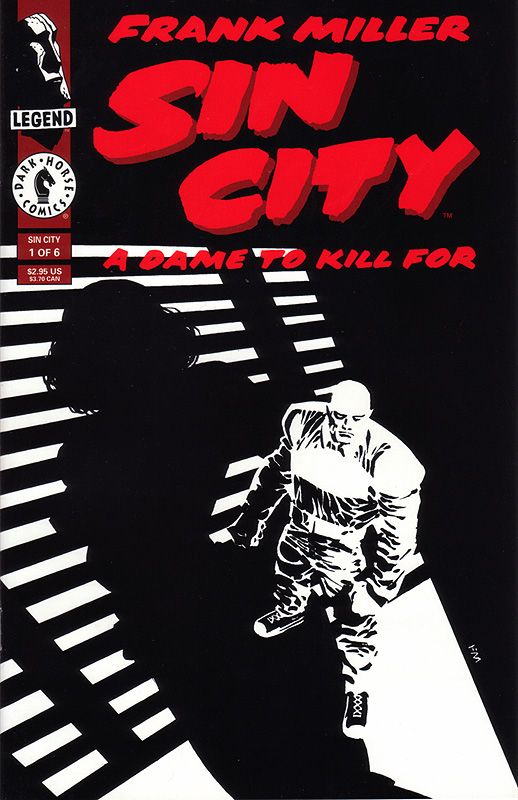 “It’s kinda like the old Rolling Stones song, where ‘every cop’s a criminal, and all the sinners are saints,'” Miller has explained, “where the lowlifes would often be heroic, and the most stridently beautiful and sweet women would be prostitutes.” Sin City is an interrelated series of mostly black-and-white “yarns,” set in the titular city somewhere in the American West. We’ll meet the same characters several times — including the massive, heavily scarred Marv, whom Miller would describe as “Conan in a trench coat”; Dwight McCarthy, a nihilist with a history of drinking, violence, and wild love affairs; Gail, an Uzi-wielding dominatrix who runs the red-light district with an iron fist; and Miho, a mute female assassin. In “The Hard Goodbye” (Dark Horse Presents issues #51–62) for example, Marv wakes up after a one-night stand to discover that Goldie, a woman who somehow was able to overlook his hideous appearance, is dead; he’s been framed for murder, and he’s out for revenge. And in “A Dame to Kill For” (November 1993–May 1994), Dwight attempts to rescue his former fiancée, Ava, from her abusive husband; but is she the victim? Writing in HILOBROW, Adam McGovern has hailed the series’ “macabre cautionary desensitization and humorous overstatement.”

Fun facts: The comics have been collected in various paperback and hardcover editions, each more gorgeous than the previous. “The Hard Goodbye,” “The Big Fat Kill,” and “The Yellow Bastard” were adapted as Robert Rodriguez and Frank Miller’s 2005 movie Sin City, which stars Jessica Alba, Benicio del Toro, Brittany Murphy, Clive Owen, Mickey Rourke, Bruce Willis, and Elijah Wood. There was a 2014 sequel, and there is supposedly a TV series reboot in the works.